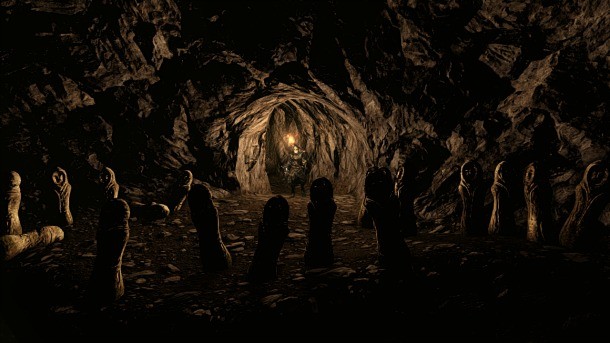 The Souls games are infamous for their high difficulty, little direction, and even less forgiveness. Some players are scared off by the punishing systems, including death penalties, fragile characters, sadistic traps, and brutal status effects. However, pushing through hardships players become grizzled veterans and find a true sense of achievement in a gaming world that tends to reward golden trophies for the simple ability to press Start.

Dark Souls II retains the signature challenge and style of the original, but adds quality of life improvements and slightly more transparency regarding how various mechanics and systems work. Elements such as the main hub town of Majula playing home to a majority of vendors and NPCs, bonfire fast travel, a streamlined introduction, and some clarity behind covenants go a long way toward making the title more inviting to new players. After a warm welcome, it’s business as usual. Players new to the Souls franchise will quickly learn that Dark Souls II plays quite differently than most mainstream titles today; it is an incredible experience anchored in exploration, immersion, discovery, defeat – and ultimately triumph.

Combat in Dark Souls II is familiar, but has some significant changes. The core blocking, rolling, sprinting, parrying, and attacking all rely on the ever-important stamina bar. You cannot mash the button and win; exhaust your stamina bar in the thick of combat and you are dead. Vigor joins vitality and endurance as a third key skill, so players have to spread their stat point allocations out a bit more. Rolling is still a viable and important tactic, but it no longer grants abusive invulnerability frames, so don’t count on it to pardon the length of a knight’s blade.

Players have their choice of class at the beginning of the game, but class is essentially a selection of starter gear. After a few hours of gameplay, point distribution can make any starting class into something completely different. Starting as a knight doesn’t hurt if you’re planning on being a slow melee character, but you may wish to add magic to your arsenal or build for some dexterous weapons. The addition of Soul Vessel respec items let players truly experiment with different builds if they so desire. If you’re a brawler type that wants to try some healing magic and put some points into the faith stat, you can get those points back with a Soul Vessel. However, these items are rare (I found a total of four on a complete 45-hour playthrough), and a full respec is not decision to make lightly.

Dark Souls II has many stories to explore, and it does so without any heavy-handed explanation or dialogue. The main story is far removed from the original, so newcomers don’t have to worry. However, players who have played Dark Souls will find some familiar encounters and faces. The atmosphere is all about showing rather than telling, and some of the realizations are wonderful. The game often presents a string of subtle lore breadcrumbs to nibble on before finally serving up a main course. Ever wonder what those statues near the well in the starting city are all about? Players who make their way down below may discover the horrifying truth.

The areas you explore are visually stunning and distinct. Each cluster of zones comes has unique aesthetics, creatures, and challenges. You never have time to become complacent or relaxed, since the rules constantly change as you move from area to area. After completing the earliest part of the game, the open world experience that follows largely hinges on player choice.

My own curiosity took me deep into some zones at three hours of gameplay that would have been better to explore at around twenty, but you’re largely free to roam in various directions at your own peril, and there’s more than one way to access many areas. For example, it’s hinted that you may want to find a ladder to travel down Majula’s well, but an ambitious jumper with a fall damage ring may be able to bypass traditional methods.

One significant change in Dark Souls II is that foes no longer respawn after being killed many times. Players can no longer grind souls forever in basic zones, but it allows them to plod forward into a difficult area a dozen times picking off difficult spawns in order to make the trek easier. This happened once to me, as my build was incredibly vulnerable to enemies in that area. While this won’t make bosses any easier, it can be used as a time-consuming, inefficient way to move through a particularly challenging area.

When many think of the Souls games the conversation inevitably turns to discussion of difficulty. The baseline difficulty is on par with its predecessor, but there are new ways to bolster the challenge for the hardcore via a covenant and bonfire items. New Game+ modes are available as well. However, focusing strictly on the challenge takes away from much of the brilliance that comes from creating a dark, atmospheric adventure that assumes that players don’t need their hands held throughout the experience.

Dark Souls II respects you enough to assume you can figure things out, despite having perhaps lost some of these sensibilities by playing other titles that walk you through on tether from start to finish. As a result, the rewards and achievements are that much more satisfying. It’s only March, but Dark Souls II stands tall as a potential game of the year.

9.75
About Game Informer's review system
Concept
As one of the cursed, explore a mysterious and majestic world in search of your salvation
Graphics
Use of varied environments gives From Software a chance to show off.
Sound
The hideous sounds of things lurking in the darkness, the clanking of heavy armor and sword – sound is tied heavily into gameplay beyond things sneaking up on you in certain areas. Epic boss encounter music.
Playability
Getting used to the controls isn’t an issue, but getting used to how combat itself works in Dark Souls II can be challenging.
Entertainment
An epic adventure from start to finish packed with wondrous environments, imaginative and terrifying foes, and the continual adrenaline-apprehension rush of passing through each fog gate make this title a must-play.
Replay
High