In 1999, Alan Moore wrote The League of Extraordinary Gentlemen. It proved two things. One: Classic literature is still cool. Two: If you are going to write about an alternate historical reality that meshes steampunk with ancient mysticism, you'd better be a damn good writer. Damnation's story isn't terrible per se, it's just confused and in such a hurry to get to where it's going that it forgets the ''little things,'' like character development and coherent narrative.

This sub-par shooter isn't aided by its lack of cover mechanic or aim assist. Damnation's levels are built so that you can platform around combat encounters, but your acrobatic skills lack any diversity, and you quickly tire of awkwardly crashing through windowpanes to get at enemies who only occasionally chase after you and rarely succeed at hitting their target.

It's a shame Damnation can't get a grip on its gunplay, because the game is filled with evocative imagery -- building-sized tanks, burly professor gunslingers, and cliffside structures built to the sky. Unfortunately, these elements are wasted on the game's repetitive environments; you'll spend most of your time navigating areas so poorly designed that Blue Omega should have hung arrow signs pointing players in the right direction. The addled gunslinger antics are actually preferable to traversing these mazes.

Damnation's biggest problems are the unintentional mistakes. The game is a mess of bugs. I saw enemies shoot through walls, hover across the ground while crouched, and magically teleport across the screen because the game couldn't keep up. More than once I stood in front of an enemy for several seconds before he noticed me. It's comedic gold, but I imagine the dev team isn't laughing. This isn't a premier blend of pulp fiction. It's just a pulpy mess. 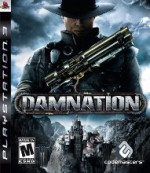 Damnation
Purchase More Info
3
i
Game Informer's Review System
Concept Take action/platform conventions and make them unplayable
Graphics Enemies stupidly fire at you in stiff, animation-free poses
Sound Sometimes characters talk to one another, but you won't likely understand where those conversations are going
Playability A lack of cover system is the least of this game's problems; Damnation is buggier than a road trip through Alabama swampland
Entertainment As bad as the game is, it's so easy I was never frustrated with it. If you're interested in witnessing a train wreck, bring a friend along for co-op. Just skip the multiplayer
Replay Low