With a core of dedicated PC fans that demand technical excellence and a curious console community that wonders what all the fuss is about, the expectations for Crysis 2 are quite high. For the franchise’s introduction to those who didn’t own a NASA super computer capable of running the original game in all its glory, Crytek wisely sticks to the traits that made the first game successful while simultaneously pushing the boundaries of graphical fidelity.

Though the story touches briefly on the events of the first game, the Crysis 2 plot is self-contained enough that you won’t be missing much if this is your first experience. Players take the role of a Marine named Alcatraz who, due to a series of circumstances beyond his control, ends up donning a nanosuit that gives him super speed, strength, armor, and stealth capabilities. With an airborne disease plaguing New York City and an alien uprising destroying the capital of the world, Alcatraz must track down a researcher who may have knowledge of how to squelch the invasion.

In the face of this grave threat, you would think our business, military, and scientific communities would come together to put forward a united front. Instead, disagreements fracture the armed forces, researchers, and a private military contractor hired to aid the city. With all the sides at odds, Alcatraz is humanity’s best bet.

Armed with the nanosuit, that load is much easier to carry. Crytek deftly mapped the suit’s abilities onto the gamepad without sacrificing traditional shooter controls, giving you cloaking, armor, and tactical assessment skills at the touch of a button. The gunplay handles as smoothly as the best shooters in the business, and the frequent weapon drops allow you to experiment with new toys without worrying about losing your preferred gun for good. The team also implemented a useful first-person cover and lean system.

In terms of level design, the game takes its cues from the streamlined approach Crytek adopted for Crysis Warhead. The decimated buildings and barricaded streets give the action a more enclosed feeling than the expansive open worlds of Far Cry and the original Crysis, but the environments are still large and varied enough to give players the freedom to wage war against the above average enemy AI with a tactic of their choosing.

Rather than force players into a series of predicable fights with predetermined weapons, Crytek creates sandbox battle scenarios and allows each player to adopt his or her own preferred approach. Like Batman: Arkham Asylum, you often enter the battle arena at a vantage point just out of sight. This gives strategic players the option of marking all the targets in the area so they don’t encounter many surprises once they open fire. From here, how you confront the overwhelming odds is up to you. You can stay in stealth mode to silently pick off enemies one by one, adopt a hit and run strategy by jumping in and out of stealth to recalibrate your approach after each kill, activate power armor for a frontal assault, or snipe enemies from the high perches present in most scenarios.

The battles and set piece moments intensify as the game progresses. I wish I could say the same for the narrative. The pawn in the middle of the human factions tasked with saving the city, Alcatraz may as well be a robot. Unquestionably following orders from no fewer than five people during the 10 to 12 hour campaign – who are oftentimes at odds with one another – the protagonist has no agency even though he controls the most powerful weapon at humanity’s disposal. Other than the CEO of the biomedical company that designed the nanosuit, whom you meet in a memorable scene, all the characters you encounter similarly lack depth. This is a shame; the theme of the lengths that the frail human race must go to defend itself from an overwhelming alien threat and how the suit changes its users is an intriguing jumping-off point.

Though its single-player campaigns are lauded, Crytek’s multiplayer has always lacked allure. At face value Crysis 2 shamelessly borrows elements of the two most popular online shooters, Call of Duty and Halo, but once you dig into the experience you begin to respect its subtle differences. For instance, instead of giving you game-changing bonuses for killstreaks, you need to collect the dog tags from your fallen victims to access radar, airstrikes, or a gunship. This forces campers out of their comfort zones or keeps their influence in check if they prefer to stay and snipe.

As with the campaign, the nanosuit is the great differentiator. Crytek UK balanced the suit's abilities well and created a smart system of persistent enhancements that players earn by using the suit’s power, armor, and stealth abilities during battle. There are enough upgrades to give players the flexibility to build a unique suit tailored to enhance their strengths or shore up their weaknesses.

With 12 maps ripped from the campaign, 50 rankings, medals, and customizable kits, Crysis 2 makes a strong case for becoming a destination multiplayer mode. The one major criticism I can levy is that Crytek locks the more creative game modes. You won’t have all the modes unlocked until level 39, which seems needlessly buried in a game that doesn’t have a large community behind it that is guaranteed to keep playing for the 15-plus hours necessary to access all the options.

Crysis 2 largely avoids the problems that surfaced during the beta, though there were some hiccups. With no dedicated servers, a few matches were interrupted by the annoying server migration. In my seven hours on the battlefield I occasionally suffered from game-crippling lag, but these instances were rare.

If you’re tired of fighting corridor-based wars against an endless flow of brainless meatbags, Crysis 2 is worth a look. The unique sandbox approach to gunfights and game-changing nanosuit lend the title a flavor of its own, and Crytek smartly leverages these strengths in both the single- and multiplayer modes. 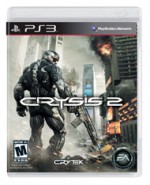 Crytek wisely sticks to the
traits that made the first game successful while simultaneously pushing
the boundaries of graphical fidelity.

9
i
Game Informer's Review System
Concept Bring Crytek’s signature sandbox shooter to consoles with a new engine and a more cohesive story
Graphics With the CryEngine 3 at its disposal, Crytek created a beautiful game filled with jaw dropping destruction and scenic backdrops. Only occasional pop-up and texture loading issues detract from an otherwise gorgeous title
Sound Hans Zimmer lent his talents to the soundtrack, but his contributions fail to give the score the evocative impact of his film work
Playability Crytek did a great job of transposing the nanosuit control onto the gamepad. The satisfying gunplay is silky smooth and navigating the environment as a super soldier is a blast
Entertainment A must play for jaded gamers sick of corridor-based shooters. Crysis 2 offers you a sense of freedom seldom found in the genre
Replay Moderately High