Crimson Dragon’s development was turbulent, starting out as a Kinect-only title for the Xbox 360. Somewhere along the way, Microsoft decided that it would look better on the Xbox One and play better without the motion controls. Though Crimson Dragon has a slight next gen aesthetic, the controls are unintuitive and sluggish – proving that you can’t change the recipe after you’ve started cooking.

The story begins generations after spacefarers from Earth have colonized the Planet Draco, a habitable alien world that is far from peaceful. Its exotic wildlife excretes all manner of acids and fire, so the colonists quickly domesticate the planet’s race of dragons and use the beasts for scouting their new home. Unfortunately, one colossal beast, called the White Phantom, continues to harass the population. You play as a rookie dragon rider who is the lone survivor of one of the White Phantom’s attacks, and might be the only person capable of saving his race from this ominous threat.

The team at Grounding Inc. has created this fictional universe from scratch, but much of the rest of the experience lacks an identity of its own. From the beginning, Grounding has stated that Crimson Dragon is a spiritual successor to Panzer Dragoon, Sega’s classic Saturn series. Unfortunately, even with Panzer Dragoon’s creator Yukio Futatsugi on board, Grounding fails to capture the spirit of that cult series.

Like Panzer Dragoon, you spend the entire game on the back of a dragon, locking onto enemies and dodging giant projectiles with little control over your destination. Crimson Dragon even adds some AI-controlled wingmen, a wider variety of weapons types, and a store full of items to feed and evolve your dragon. These seem like reasonable ways to advance the genre, but most of the weapons types are inferior to the standard lock-on fire attack, and your wingmen do little to change up the gameplay. I actually played through a couple missions solo because my old wingman had left and I needed to hire a new one. I didn’t even notice he was gone, which speaks volumes to his contributions in battle.

Crimson Dragon’s bigger problem is that the levels feel tired and repetitive. The art direction is admittedly stunning and colorful, but its dazzle grows thin after playing through a single environment five or six times. Crimson Dragon’s mission list might keep you busy for a while, but many of the tasks send you back to environments you’ve already seen. You may fight different sets of enemies, but scenery is familiar. If that wasn’t bad enough, some of the main story missions are locked until you collect certain antibodies from fallen enemies, meaning you have to go replay levels and make sure you kill creatures you missed the first time around.

Crimson Dragon tries to mix up the repetitive shooting with sequences where you collect gold beacons, but these moments are about as exciting as flying through a series of rings. Levels occasionally open up and allow you to fly around the environment, but I constantly felt like I was fighting the camera throughout these sequences, and the dragons are so sluggish that there is no thrill to flying. I was actually happy every time the game limited my controls to the rails.

I loved the original Panzer Dragoon games, so just to make sure I wasn’t misremembering the quality of the series I went back and sampled the library. I had more fun playing the first levels of Sega’s old shooters than I did with my entire time with Crimson Dragon. Hardcore fans of classic on-rails shooters like Star Fox or Space Harrier might be able to play through this while wearing rose-tinted glasses, but it doesn’t hold a candle to its precursors that came out decades ago.

6
About Game Informer's review system
Concept
Resurrect the on-rails shooter genre with a spiritual successor to Sega’s classic Panzer Dragoon series, but fail to recapture the glory
Graphics
The environmental design is exotic, but the graphical detail isn’t much better than last-gen games. Not surprising, since it originally began as an Xbox 360 title
Sound
The music is moody and dramatic, but mostly unremarkable. The voice acting sounds like a Saturday-morning cartoon
Playability
You control your dragon with the left analog stick and your aiming reticule with the right stick, which takes a bit of getting used to
Entertainment
Crimson Dragon might offer fans a few cheap thrills of rail shooters, but the repetitive gameplay grows old quickly
Replay
Moderately Low 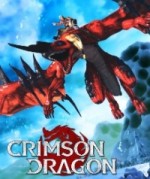