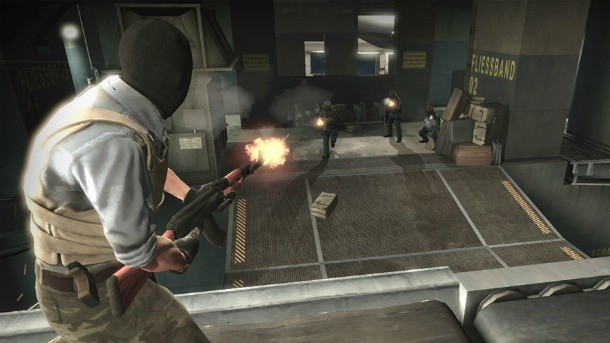 Anyone who played Counter-Strike significantly after its initial release is aware of its hardcore community. Relying far more on patience and team tactics than modern shooters like Call of Duty, it found a rabid following that has remained active for years. Valve continues to support that PC community with Counter-Strike: Global Offensive, but this time console players get to enjoy the action on Xbox Live and PSN. Global Offensive adds more maps, character models, and weapons, but remains largely the same experience it’s been for over a decade.

Eight new maps are available (in addition to eight returning classics), and they’re spread throughout two new game modes based on popular mods. Arms Race is based on the Gun Game mod for Counter-Strike: Source, and tasks players with getting one kill with each of 26 weapons. Each time you take down an enemy, you progress up a pre-set ladder of weapons until the final golden knife kill.

Another new mode, Demolition, is more similar to the objective-based gameplay of the original game. Teams of terrorists and counter-terrorists compete to bomb an objective or protect it, and players spawn with a new gun if they earned a kill in the previous round. If you rack up more than one kill, you’re rewarded with bonus grenades when you respawn.

These two modes can be fun, but many Counter-Strike fans will likely gravitate toward the classic modes. With short rounds and no mid-round respawns, it’s a significantly different experience than popular shooters of today. Longtime fans of the series will feel right at home with the format, but gamers introduced to the shooter genre in more recent years may find themselves frustrated with some of its trademarks (no instant respawns, no down-sight aiming, a lack of persistent progression, etc.).

Outside of a couple of glitched spawns that left me stuck in mid-air, I didn’t run into many issues when it came to lag or connection errors. As a downloadable title, Global Offensive offers a tried-and-true experience at a reasonable price, even if its gameplay isn’t for everyone. If you prefer working with others and attacking the opposing team with well thought-out tactics instead of brute force, you should find plenty to like in this updated release.

8
About Game Informer's review system
Concept
Give console players the Counter-Strike they’ve been waiting for while still nurturing the PC fanbase
Graphics
Animations are stiff, but the classic maps look better than ever
Sound
With less chaos than other FPS titles, this feels like being in a library by comparison
Playability
Performs admirably with a controller, but a keyboard and mouse is still the best option for this series
Entertainment
Longtime fans should appreciate this update, but it may be a tough sell for those accustomed to other franchises
Replay
Moderate