Cosmic Star Heroine takes inspiration from some of the best RPGs of yesteryear, such as Chrono Trigger, Phantasy Star, and Suikoden. This combination is tantalizing to any RPG fan who loves to wax nostalgic about the genre's early days. Zeboyd Games also makes its own mark by providing a modern spin on old-school mechanics, especially its fun, turn-based battle system. The developers' passion and knowledge for the genre shows; I had my share of fun, but wish the game packed more of a punch.

You play as Alyssa, a legendary spy who comes across a conspiracy that sets her on a galaxy-saving journey. The story itself is minimalistic, giving you just enough to propel you forward. It never got its hooks in me – even major plot twists felt unexciting. However, you at least get some comical dialogue and funny little callbacks to old-school RPGs and Zeboyd's past games if you chat with the NPCs. It made me want to talk to everyone just to see what reference I'd find.

During the trek, you get your own ship to build up Alyssa's army (à la Suikoden). Your team includes everyone from an alien bounty hunter to a dancing robot. While this may seem exciting, don't expect much, as the characters never develop into anything beyond their basic traits. The party members make more of an impact with their battle abilities than their personalities.

The real heart of Cosmic Star Heroine is its combat system, which focuses on exploiting enemy weaknesses. It takes the turn-based battle system and makes it more than just mashing the attack command, forcing you to think through every encounter. The system centers on using each turn wisely to maximize your damage output, and has a lot of depth. Cosmic Star Heroine has no MP or SP to execute attacks; instead, each character's skills can only be used once before you must take a turn to defend and recharge them. As you pick abilities, your style score goes up, making your abilities more effective as time goes on. This is accompanied by a hyper mode that occurs every few turns to deal double damage and increase your chance of inflicting ailments. Basically, you want to use that recharge option at the right times, getting the most out of your arsenal.

I most enjoyed the glut of party members and figuring out how to best take advantage of their unique abilities. I'd cast buffs while I saved my strongest attack for hyper mode to cause devastating damage. The different character skills and flux of party members make for good variety, always forcing you to rethink your strategy. Later in the game, you get access to team attacks (think Chrono Trigger) and different equipment that gives you even more special abilities.

Battles are not quick affairs, however, and lose their luster over time. Once you find your strategy, not much makes you change it up and the areas all play out similarly: Open blocked paths, kill a string of enemies, and then fight a few bosses for good measure. Cosmic Star Heroine keeps grinding to a minimum; enemies don't respawn once you eliminate them, and the map isn't overflowing with encounters. Even with this convenience, the short adventure (by RPG standards) gets repetitive. The story took me about 15 hours to complete, but I started losing interest at the halfway point, even when the battles were raising the stakes. The game is mostly linear, so this doesn't help things, and while you can discover a few side quests that let you take down hidden bosses and find new members to recruit, the effort isn't always worth it.

Your recruits aren't main party members, but each person who joins your cause has a special skill, such as health regeneration or extra XP. However, you can only equip one at a time. Even after scouring towns and hidden dungeons, the recruits I found didn't factor much into my strategy – they were just extra bodies on my ship. Not doing more with them or making them feel more like individuals is a missed opportunity. Their dialogue is flat, and once you find one with a powerful support skill, you have little reason to scout others.  For instance, I discovered one with health regeneration early in the game and stuck with that most of the journey.

Unfortunately, Cosmic Star Heroine has had its share of technical hiccups since launch. While patches have continued to improve on this, I experienced a few flat-out freezes and battle menu disappearances. Nothing was grave enough to stop me from playing, but I hope the stability continues to improve.

Cosmic Star Heroine has a lot of great ideas, but they never develop into anything that leaves you fully satisfied. The game is still fun and worth playing, though; as someone who grew up with Phantasy Star, Suikoden, and Chrono Trigger, seeing some of their elements collected and compiled is charming. I just wish Cosmic Star Heroine was better-rounded and the rest of the game had as much depth as its battle system. 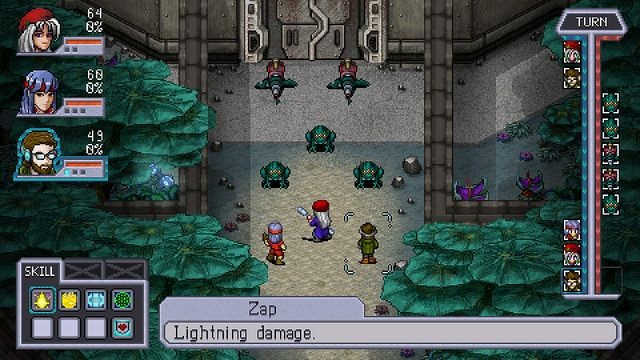 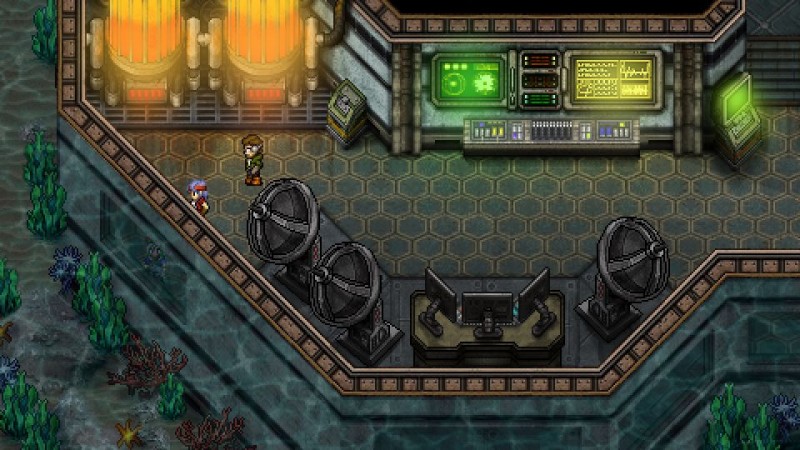 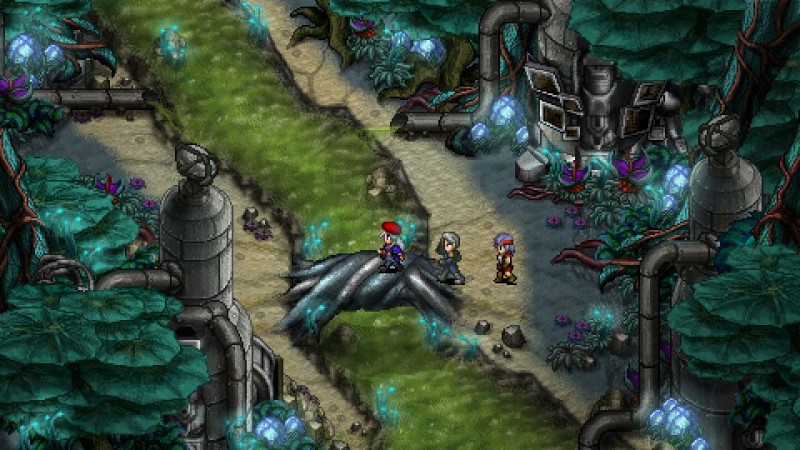 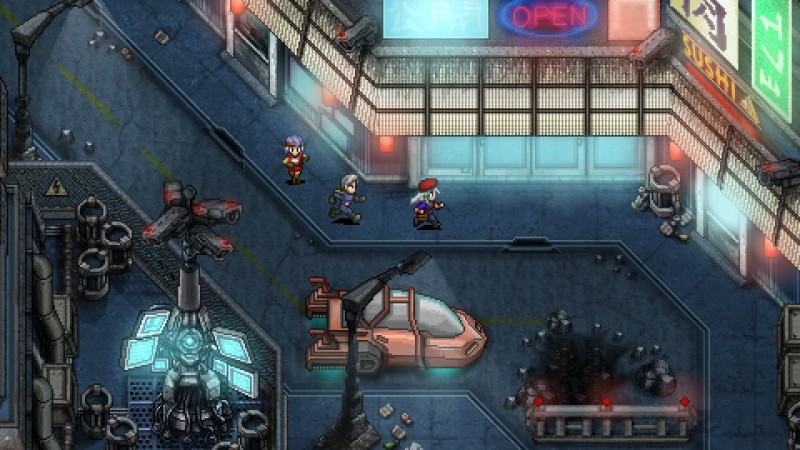 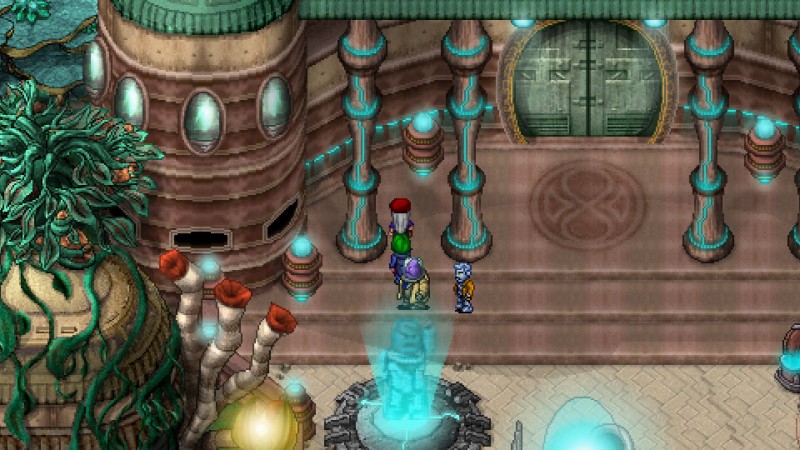 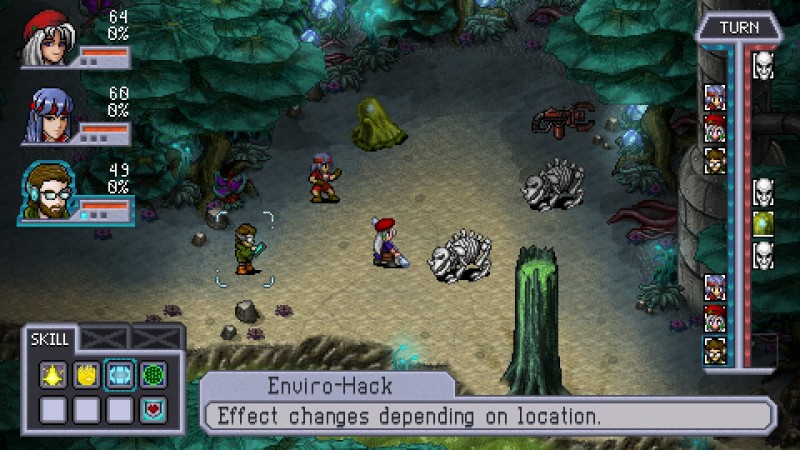 7.5
About Game Informer's review system
Concept
Put a stop to an evil government conspiracy by recruiting people to save the world
Graphics
Visuals evoke the 16-bit era, right down to the cutscenes. However, the environments aren’t that interesting to explore with a lot of barren space and not much to do
Sound
The music helps give the game its own personality and style while also capturing a retro feel
Playability
While simple at its core, learning the intricacies of the battle system takes experimentation, and the brief tutorial doesn’t ease the learning curve
Entertainment
Cosmic Star Heroine doesn't leave a lasting impression, but it's a fun romp with some interesting ideas
Replay
Moderate