You’re blazing through the wastelands with two cars pumping out rocket barrages and gunfire on opposing bandits seeking to take out your mobile command vehicle. Scenery whizzes by as you make haste to prevent your cars from crashing into an errant mountain or building. Locking on to opponents and taking them out one by one, you emerge victorious, collecting some valuable spare parts and a tank of fuel. This is Convoy, a wasteland romp that channels the post-apocalyptic settings of Mad Max and mixes things up with the tactical roguelike sensibilities of FTL.

From your initial loadout selection where you select a MCV with a variety of abilities, you acquire new vehicles to add to your starting echelon of cars as you scavenge through the procedurally generated wasteland in search of critical pieces to repair your busted-up spaceship. Danger lurks behind every event, and while some of the encounters on the map include dialogue and negotiation, the major focus of Convoy is combat.

Death is permanent, so your trashed cars won’t be coming back. If your MCV turns into twisted metal, the game is over. This keeps the pressure on as you struggle to maintain your cars and keep your fuel topped off as you wander around the huge map in search of your key objectives. You never feel completely safe, and a single battle – even with the weakest of bandit raiders – can wreck your entire game if you fail to pay attention. Combat is plentiful and simple – just lock on with your units and let them fire away with whatever weapons they have equipped while you manage cooldowns on your MCV. The wrinkle is in positioning, as the varied weapons all have different ranges and you have to make sure that you watch for upcoming obstacles at all times; battles happen on the move and at high speeds, so running into the scenery will crush even the best car to smithereens. These battles are initially fun, but getting pushed into the same bland encounters becomes detrimental to the overall experience. Eventually, pushing through each fight as you seek to make actual progress is just a painful endeavor.

You are able to repair your vehicles at outposts and purchase new weapons and other utility items like shields, so these essential locations that dot the map should be high on your priority list as you travel the expansive wastes. Like the combat, outfitting your craft and picking up new ones (sometimes through quests) is pretty cool at first, but even these aspects sink into a repetitive loop that feels like a chore. Convoy has its heart in the right place and handles the whole post-apocalyptic tactical roguelike approach well, but it feels rough around the edges. Gameplay degenerates into a slog as you struggle to deal with the monotony of the myriad encounters that lurk around the map.

7
About Game Informer's review system
Concept
Travel through the wastelands in search of spare parts and solace
Graphics
Extremely threadbare – you can call it retro, but it’s not winning any accolades for presentation
Sound
Rockets, gunfire, and a soundtrack that wears out its welcome over the course of many, many battles
Playability
Surprisingly easy to grasp for a tactical roguelike, a new player should have the concepts down after a game or two
Entertainment
The Mad-Max-meets-FTL concept is entertaining for a bit, but the constant and unwavering combat gets repetitive fast – even with the customization
Replay
High 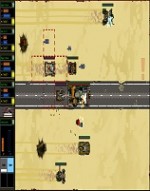