The Red Alert offshoot of Command & Conquer has never taken itself seriously, and this new entry is no exception. Firing bears out of cannons, leveling a base in seconds thanks to Tanya's explosive talents, and transforming jet fighters into landbound mechs are only a few of the moments that will have you grinning ear to ear. I'm not convinced this is the most balanced or nuanced game around, but it's a hell of a lot of fun.

The majority of Red Alert 3's design is textbook real-time strategy stuff, with complex unit relationships, off-screen support powers, and unit specials for everyone. However, the co-op nature of the campaign sets it apart. Every single mission (and there are enough to deliver dozens of hours of playtime) has two commanders working side by side, and it's an absolute blast to pound the AI with a buddy. Flying solo with an AI-controlled ally is less awesome, as they're fairly brain-dead, but still results in an above-average single-player campaign.

Competitive multiplayer is amusing but nothing special, offering the usual permutations on deathmatching. The good bits of Red Alert 3, though, are more than worth the price of admission.

8.75
About Game Informer's review system
Concept
Get as gonzo as possible in the best Command & Conquer title to date
Graphics
Colorful and vibrant, this has a more cohesive and enjoyable art style than C&C has ever had
Sound
Campy accents and explosions. What more is there?
Playability
The otherwise brilliant interface is hamstrung by its failure to let players effectively queue orders
Entertainment
It's not serious in any way, in tone or in balancing, but this is the most flat-out fun RTS in some time
Replay
Moderately High 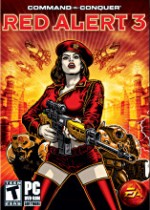