Castlevania: Harmony of Despair Finally Coming to PlayStation Network, Adds Local Co-op
by Bryan Vore on Jul 07, 2011 at 07:48 AM We caught wind of this news just before E3, but Konami just made it official. Castlevania: Harmony of Despair will be in PlayStation 3s this summer with some extras..

While Konami doesn't have any specifics on the exact release date, the game will also include The Pyramid of Ruin and characters Julius Belmont and Yoko Belnades as bonuses. These items all cost extra in the the Xbox Live Arcade version (which released in August last year).

Most exciting for me is the addition of 4-player local co-op play. As much fun as it is to join up with your buddies online, there have been plenty of times I've wanted to team up on my couch, but it hasn't been possible on the Xbox version.

Maybe Konami will hook Xbox players up with some kind of bonus when this releases, but I wouldn't hold your breath. 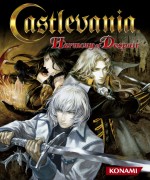