A Charming But Forgettable Disney Platformer
by Tim Turi on Sep 03, 2013 at 06:30 AM
Publisher: Sega
Developer: Sega Studios Australia
Release: September 4, 2013
Rating: Everyone
Reviewed on: PlayStation 3
Also on: Xbox 360, PC Mickey Mouse has had a tough run in games recently. Junction Point’s console Epic Mickey games disappointed Mouseketeers, as did DreamRift’s spiritual successor to the 1990 Genesis classic Castle of Illusion on 3DS. Sega’s new downloadable remake of the aforementioned Genesis platformer outperforms those titles, but it ends up feeling formulaic by modern standards.

Castle of Illusion isn’t a one-to-one remake of the original, but it features familiar levels, bosses, and side-scrolling platforming sequences. It also incorporates checkpoints and generous retries, which curbs most of the original’s challenge. The most drastic ­difference is the inclusion of 3D boss fights and platforming sequences. Mickey leaps across macaroons in a milkshake river and flees a giant apple while running toward the camera Crash Bandicoot-style.

Note: This Test Chamber preview was recorded at an earlier date and is not a video review

Whether bounding off the heads of toy soldiers in 2D or evading a huge jack-in-the-box in 3D, the platforming feels responsive and reliable. Despite the solid controls, the action in Castle of Illusion isn’t exciting. The remixed levels and 3D sections show Sega’s eagerness to rejuvenate the original’s 23-year-old design, but those changes don’t bring it up to today’s platforming standards. Leaping over a boss’s shockwave attack in a 3D battle is ­clichéd enough that I can’t pretend it’s fresh and exciting just because it’s new to this game. Players may have loved hopping across floating leaves in 1990, but the pretty new visuals can’t rescue it from mediocrity.

Castle of Illusion’s colorful worlds, good controls, and detailed character animations are charming (A giant, licorice dragon boss killed me several times because I was too busy admiring its craftsmanship). If you’re a diehard Disney fan in the mood for a short, breezy platformer, this may hit the spot. However, the core gameplay beneath the endearing Disney aesthetic left me wanting more. 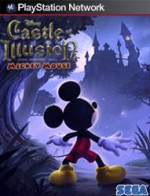