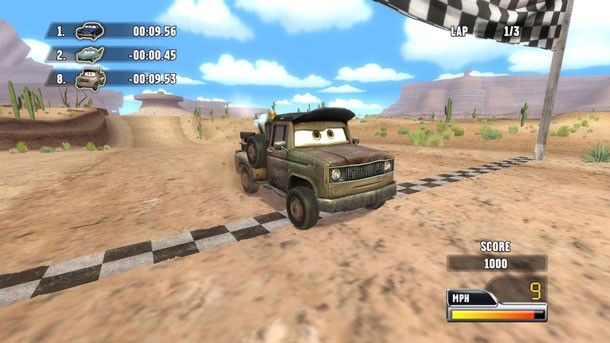 The first Cars game took players by surprise, myself included. Based on Pixar’s movie, it rose above the level of being yet another cute game for kids. Developer Rainbow Studios (ATV Offroad Fury) deftly balanced the limits of the license with solid gameplay, entertaining younger players and grizzled achievement hunters.

With Cars Race-O-Rama, the third game in as many years, it’s time to put Lightning McQueen and company into storage. Nothing is particularly wrong with the game, only that previous versions have done it before — and in the case of the first game, actually offered more. A new drifting mechanic awards points for skidding around turns, but aside from padding scores it’s not that useful on the track. Monster-truck races contain some of the most frustrating races in recent memory, with vehicles that control like shopping carts pushed backward. Upon landing, the beasts occasionally reverse direction or aim themselves skyward, evaporating any chances of winning.

The globetrotting structure is a nice idea, but aside from slightly different themes (beach, urban center, Radiator Springs), everywhere McQueen visits is plagued with invisible walls and a puzzling lack of traffic. It’s not fun to explore, and aside from activating a few boring minigames, there’s no reason to cruise around the levels.

If there’s anything nice to say about Race-O-Rama, it’s that it provides a teachable moment for parents: Sometimes it’s best to leave well enough alone.

The third Cars game shows that the formula is wearing thinner than Mater’s primer.

Purchase More Info
6
i
Game Informer's Review System
Concept Compete in a variety of races and challenges with the cast of Pixar’s Cars
Graphics The cars look great, which makes the bland backgrounds look even worse by comparison
Sound A handful of repeating voice clips will have you reaching for the mute button, if the generic tunes doesn’t get you first
Playability The cars regularly switch between being unresponsive or overly sensitive
Entertainment The third Cars game shows that the formula is wearing thinner than Mater’s primer
Replay Low