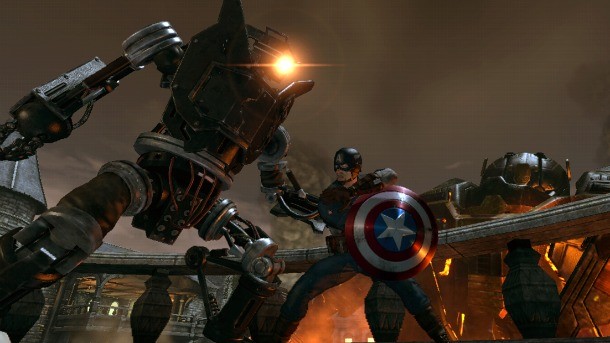 Unlike most superheroes, Captain America was created in a lab. Scrawny patriot Steve Rogers was selected to take part in a secret government project called Operation: Rebirth, a scientific study that attempted to alter the genetics of everyday men and turn them into super soldiers. After Steve Rogers’ transformation, a Nazi spy sabotaged the operation, making Rogers the sole beneficiary of the program. But what if this spy had acted sooner? What if he had sabotaged the government’s experiment in the middle of the process? Perhaps the allies would have ended up with a soldier that functioned a bit like Sega’s movie tie-in: a brawler capable of getting the job done but far from super.

After infiltrating Baron Zemo’s Bavarian castle, Captain America sets off on a multi-tiered special op to disable the Hydra forces entrenched there, sabotage German scientist Arnim Zola’s plans to create a master race, and kick in the Red Skull’s teeth.

Marvel Comics has put its talent in the writer’s chair for many of the Marvel games released within the last few years. While this practice sounds noble, the storytelling needs of a game are different from a comic, and the recent Thor and Iron Man titles are proof that a comic writer’s talents don’t always benefit a game. Thankfully, Christos Gage fares better with Captain America. Super Soldier is filled with many classic video game tropes, but also rolls out some genuinely dramatic moments that had me excited to see how Cap was going to save the day.

In terms of combat capabilities, Captain America is often matched up against DC’s Batman. Both heroes are examples of men at the peak of human fitness possessing supreme fighting capabilities. As such, it’s fitting that Super Soldier’s combat system resembles the one in Batman: Arkham Asylum. This contextual action system doesn’t respond well to button mashers, but those who pay attention to their surroundings can orchestrate many impressive combat sequences. Throwing Cap’s shield to take out three or more snipers in a row never gets old, and Cap has a crippling strike meter that he can build up to unleash single-hit takedowns and room-clearing combos. Cap delivers counterattacks and uses his shield to ricochet incoming bullets back at his attackers with effortless grace most of the time, but occasionally an enemy will make Cap look like a rookie by interrupting a counter.

The game’s platforming sequences also highlight Captain America’s physical grace, but these on-rails segments don’t make players feel as capable. While Cap is flying through the air, jumping across beams, and swinging from poles, players perform timed button presses that make Cap move faster through the jungle gym. Rarely does a player have to worry about missing a jump or even plotting a course. This straightforward design may have saved time during development, but it removes any sense of exploration, accomplishment, or danger from these choreographed action moments.

Still, Cap’s platforming abilities are inoffensive compared to his hacking skills. Structured to look like Cap is hacking the Nazi’s enigma machine, these minigames require players to match symbols from a jumbled web of lettering. They start out boring and quickly turn tedious. The level design also has its hiccups. Baron Zemo’s castle is a massive complex for players to traverse, but you end up doing so in a linear fashion. The few times I had to backtrack, I got lost.

Despite these annoyances, Captain America: Super Soldier is a fun, if sometimes mindless, action roller coaster. The game doesn’t stray too far from tried and tested gameplay mechanics, but its lack of creativity ultimately holds it back, and it lacks one final level of polish needed to shine. 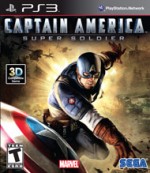 b done but far from super.

Purchase More Info
7.5
i
Game Informer's Review System
Concept A solid action game with mediocre platforming sequences that isn’t completely ruined by its movie license
Graphics Next Level Games has done a good job bringing a 1940s German military complex to life, and most enemies have interesting designs
Sound Most of the game’s voice acting is solid, and the punchy sound effects punctuate the action. Cap’s verbal asides, designed to help players if they get stuck, feel like they were torn from a book on old school game design
Playability The combat system is fast and tight, but some of the platforming sequences are boring and the hacking minigames late in the game get tedious
Entertainment Better than most video game movies or even many comic book games. Next Level Games has scattered enough collectibles throughout the game to justify searching every corner of every level
Replay Moderate