This Cell Phone-Focused Horror Title Gets Poor Reception
by Annette Gonzalez on Mar 09, 2010 at 08:45 AM Hudson's latest adventure kicks off with a group of teens that convene in a chat room to discuss a rumor about The Black Page, a website that allows users to communicate with the dead. Chat room participants mysteriously get sucked into the "Mnemonic Abyss," a cluster of locations where the deceased walk among the living. You'll play as different characters through multiple episodes to uncover a plot as poorly executed as most straight-to-DVD horror releases.

As the title implies, Calling involves use of cell phones to communicate with the dead and travel between three desolate locations within the abyss: an old house, school, and hospital. You'll receive calls from the departed where less-than-stellar voice actors deliver eerie messages through the Wii remote's tinny speaker. Dialing phone numbers you receive on your journey will transport you to other areas in the abyss.

Most of your time is spent navigating dark, repetitive hallways in search of key items. Microscopic items littered across levels are easy to overlook, as they blend into the background's static textures. A faint glimmer would have been helpful, especially when roaming without a light source. Once all proper items are collected, events occur that typically involve shaking off a ghost with the Wii remote, a sequence usually preceded by a load screen that interrupts gameplay flow and eradicates any feeling of suspense. Warding off ghosts unsurprisingly requires a few quick shakes of the remote.

Exploring Calling's generic locales to interact with countless objects and engage in uneventful set pieces is hardly enjoyable. The game suffers from slow pacing throughout the eight-plus hour experience, which fittingly ends with an anticlimactic scene. You should just hit the ignore button on this one.

4.5
About Game Informer's review system
Concept
Want to interact with the dead and transport to different environments? There's an app for that
Graphics
In-game visuals and environmental backgrounds are rough around the edges
Sound
The voice acting and ghost moans are amateurish
Playability
Passable controls take some getting used to. Minimal guidance makes navigation a pain. Plenty of save points remove the frustration of restarting an episode after failed events
Entertainment
Wandering dark hallways becomes stale rather quickly. Uninspiring puzzles are sparingly sprinkled in and hardly break up the monotony
Replay
Low 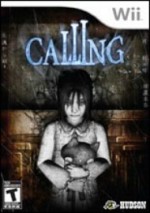