For as big of a cultural phenomenon as Call of Duty is, its presence on mobile has been relegated to Elite and scaled-down versions of the zombie modes in Treyarch’s games. With Strike Team, Activision’s mobile developer, The Blast Furnace, is attempting to create a new experience that’s built specifically for phones and tablets. Some of Strike Team’s ideas are commendable, but several issues combine to create an uneven, awkward experience.

What immediately separates Strike Team from traditional Call of Duty gameplay is the ability to switch between first-person and a top-down perspective at almost any time. Your team of two can be switched between at will and controlled in first-person, but a quick tap of the drone view button makes the action appear via an eye in the sky.

First-person control works fairly well for movement, with the left and right sections of the screen acting as virtual analog sticks. Things get hairy when hostiles appear, however, as it’s difficult to get a bead on enemies quickly. To remedy this, The Blast Furnace has placed small arrows on the far left and right of the screen. One tap of these arrows snaps the aiming reticle to the next enemy. It’s comparable to how the console versions snap to nearby enemies when aiming down sight, but Strike Team doesn’t require you to be looking anywhere near the enemy if you want to immediately put a crosshair over his face. Tapping these arrows feels like cheating, and battles can frequently turn into “tap arrow, tap shoot button, repeat.”

Viewing the action from the drone feels significantly different, and it introduces some stealth and flanking elements to the shooting gallery feel of first-person view. You can order one of your two-man squad to approach and suppress an enemy directly, while the other can sneak up on the foe and stealth kill him with just a few taps. This is satisfying when it works, but the level design rarely lends itself to advanced tactics.

Strike Team shares some similarities with its console big brothers, especially in the pre-mission loadout screen. Perks like bandolier, sleight of hand, and others are unlocked as you rank up, as well as additional weapons. Several weapons and items can be purchased from within the loadout screen, but I never felt the need to spend additional cash beyond the initial $7 price tag.

Strike Team’s campaign tries to hit some of the same notes as the action-packed campaigns of the console games, but it never feels engaging. You place C4 on designated areas, sneak past patrols, and protect friendlies as they hack computers, but it’s never particularly exciting thanks to the whack-a-mole gunplay. Enemy AI would be considered laughably terrible on consoles, and it’s hard to give these brain-dead soldiers a pass just because they happen to be on a phone or tablet.

Outside of the campaign levels, players can also test their endurance on challenge maps or strive to reach the top of challenge leaderboards. I appreciate the attempt to make a feature-packed mobile title, but control and AI issues keep Strike Team from being the polished experience that’s typically associated with the Call of Duty name. 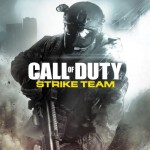 Control and AI issues keep Strike Team from being the polished experience that’s typically associated with the Call of Duty name.

Purchase More Info
5
i
Game Informer's Review System
Concept Bring the Call of Duty experience to mobile devices
Graphics It resembles Call of Duty’s art style, but many textures and details are rough
Sound The soundtrack is composed of generic action-game fare
Playability The top-down view is fun at times, but first-person isn’t ideal for gunplay
Entertainment Strike Team is a noble effort, but is ultimately a disappointing mobile experiment
Replay Moderately Low