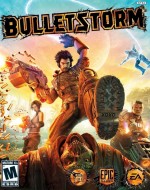 All you know about killing with style using your
surroundings has been a prelude to the bloody playground of Bulletstorm.

Purchase More Info
9.25
i
Game Informer's Review System
Concept Bulletstorm delivers a boot-full of variety and originality to the stagnating FPS genre
Graphics Masterful animations, stunning backdrops, and a vibrant color palette assault the senses
Sound Your ears will be treated to snappy dialogue, top-notch voiceovers, and blood-pumping metal riffs
Playability The game controls like a dream, allowing you to easily unleash nightmares upon your foes
Entertainment Perfect for fans of penis jokes, swearing, gore, and tight gameplay
Replay High