The body count of Hitler's misguided military ambitions and the resulting global retaliation is estimated to be around 50 to 70 million. After playing the hundreds of WWII shooters publishers shoved down our throats over the last 10 years, I've taken down nearly as many Nazis. The latest title trudging back into this all-too-familiar war is Brothers in Arms, a series known for its dedication to production values and tactical gunfights.

The latest entry, Hell's Highway, rejoins 101st Airborne squad leader Matt Baker. His team has been assigned a forward mission to capture several bridges and the Dutch city of Eindhoven in the opening stages of Operation Market Garden, the largest airborne battle in history. Baker is also dealing with the guilt of withholding information from his squad regarding the death of their fellow soldiers during the Normandy invasion. Through a series of flashbacks, we witness Baker and his squad dealing with the toll of war in different ways -- some clinging to superstition, others questioning their objectives, and Baker internally struggling with his leadership decisions. The cutscenes feature superb facial animations, articulate direction, and voice acting worthy of Band of Brothers.

As Baker and company dig into the trenches, the familiar BIA strategy takes hold. With each set piece skirmish, you must navigate your squads through the Dutch countryside to find cover positions, suppress the enemy, and execute flanking maneuvers to eliminate the hostiles. Your squad is largely composed of Yanks with poor aim, so most of the kills will come from the barrel of your M1 Garand. Picking good cover positions is paramount, as wooden objects like fences and barrels won't withstand the fire of a Nazi MP40 (couches, however, can absorb entire clips). Hell's Highway mixes up the action by introducing solo building clearing objectives and larger scale firefights where Baker commands three squads at once.

While the tactical nuts and bolts of the previous games holds up, the mission selection does not. Hell's Highway traverses too many well-worn paths. Seasoned veterans may find themselves yawning through cliches like clearing villages with a tank, a token sniper sequence, wine cellar shootouts, and the famed ''you lost all your weapons, get by with a pistol'' mission. Whereas titles like Call of Duty 4 take missions like a sniper sequence and breathe life into them with new perspectives, Brothers in Arms is content presenting something you've played 100 times before.

Some of the controls could also use some polish. The general squad direction, aiming, and shooting mechanics are all solid, but the game needs a more effective grenade tossing system, melee attack for close-quarters combat, and a refined sprint control that lets you easily control your direction.

Brothers In Arms: Hell's Highway is a competent tactical shooter blessed with a dedication to narrative rarely seen in shooters. If Gearbox can build off this success with more inventive gameplay, the series has a chance of overcoming the boredom that curses so many WWII titles. 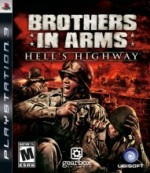 Purchase More Info
7.75
i
Game Informer's Review System
Concept Continue Matt Baker's story by shooting and strategizing your way through the opening stages of Operation Market Garden
Graphics Fantastic cutscenes, superb facial animations, and impressive use of depth of field, but the game suffers from serious texture pop-up
Sound Earnest voiceovers and a solid theatrical score
Playability Accommodating as can be. Choose your control scheme from classics like Halo, Call of Duty, Rainbow Six, or the BIA default
Entertainment Hell's Highway doesn't offer gameplay or multiplayer innovation, but the production is top notch