The story behind Broken Age’s creation is filled with triumphs and twists that rival many game narratives. First launched as a Kickstarter, Double Fine aimed to shed light on game development while also delivering a new title designed in the spirit of classic LucasArts adventures. It was a runaway success, eventually earning more than $3.3 million, which far exceeded the original goal of $400,000. The project’s scope expanded and the studio reevaluated its scale – eventually deciding to raise additional money and split the game, now known as Broken Age, into two acts.

It was all chronicled in a series of documentaries that showed how the sausage was made. People who didn’t breathlessly follow each minute and design decision should know that Broken Age stands alone as an excellent game that you don’t have to be a club member to appreciate.

Broken Age tells the story of a pair of characters living in two completely different worlds. Velouria’s village lives in fear of an entity known as Mog Chothra, and they sacrifice maidens every 14 years to keep the beast from destroying them all. Shay lives an isolated life on a spaceship, where he passes time engaged in pathetically phony “missions” for an overprotective AI mother. How their stories intertwine is a mystery that’s saved for the final moments of this first installment.

Double Fine’s games have traditionally played at the intersection of the familiar and strange, but Broken Age pushes the boundaries even further. The writing is sharp, with dialogue that adds dimension to even the smallest of bit players. Puzzles are well thought out and are appropriately weird, too. If you’ve never grossed out a talking tree to the point of vomiting, you will. The characters and their worlds are clever and interesting. In Vella’s story, each town in her world is known for a particular trade, and hers is baking. To appease the ­loathsome beast, maidens wear elaborate “gowns” that are actually enormous cakes. If you’ve seen those odd doll/confection hybrids while grocery shopping, you know what I’m talking about. Only she seems to realize the absurdity of the situation, and she alone decides to rebel against the sacrifice. That bold move puts her adventure into motion.

Shay is similarly stuck, though his life is safe to an extreme. He’s coddled by an AI mother, who coos at his every tiny triumph. Seated in his toddler-toy captain’s chair, Shay is put through various missions, like hug attacks and ice-cream avalanches, where failure is impossible (a sly commentary on puzzles and games?). The robotic NPCs marvel at his cleverness, though Shay feels unfulfilled. After sabotaging a mission, I got to experience some of the danger that he’s been craving all along.

You choose between Vella and Shay’s stories at the beginning, but you can swap between them at will. You don’t trade items or flip switches between worlds, but the option provides a chance to take a break from one story if you get stuck on a puzzle or are just looking for a change of pace. It took a bit longer for Vella’s story to get its hooks into me. Hers is the more traditional of the two, with extended dialogue sequences and plenty of characters to speak with (and fetch things for). Shay’s comparative isolation naturally creates more action- and object-oriented puzzles. When I got a little tired of clicking through dialogue in Vella’s world – and I did – I appreciated being able to switch to Shay and explore the off-limits areas of his ship.

Broken Age is the best venue I’ve seen for Double Fine’s twisted sensibilities in a long time. They’ve crafted two unique worlds, ­filling them both with just enough silliness to be fun without overwhelming the characters and their ultimately touching journeys. I’m eager to see what Act II has in store for us all.

8.5
About Game Informer's review system
Concept
Find your own place in the world in a pair of imaginative, tandem adventures
Graphics
Like pastel drawings come to life, the game is a visual wonder
Sound
Recognizable talents like Jack Black and Elijah Wood provide their voices, fleshing out the memorable characters
Playability
The UI is streamlined, even for a point-and-click adventure game
Entertainment
With imaginative puzzles and wondrous settings, Broken Age is a delightful game for fans of adventure
Replay
Moderate 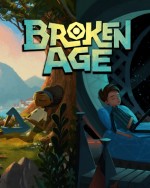