Fantasy action/RPGs are plentiful, so any entry in the genre needs to be more than just competent to stand out among titans like Dark Souls II and Diablo III. Though Bound by Flame does not reach those heights, it should not be overlooked. Precise combat and plenty of of customization make it more fun – and more challenging – than it first appears. Combat is grounded in the style that the Souls series has popularized, but the character development and relationship-building are more along the lines of Dragon Age.

Parrying and blocking are essential no matter which of the three main class trees (warrior, ranger, and pyromancer) you explore. The abilities are fun and allow players to develop a set of skills that suit their playstyle, but they are somewhat limited in variety. Each tree has only a few signature skills, with most abilities just adding on to existing ability functionality. The limitations don’t feel like they hurt things too much, but the desire to have a few more moves gets stronger as the battles get harder. Combat is equal parts twitch and tactical; players hoping to win by button-mashing will find themselves dead in a hurry.

Battles leave little room for error, especially against bosses. These encounters do a solid job at breaking up the standard enemy clusters that the game throws at you. Bosses tend to have more interesting movesets and skills, along with more satisfying death sequences. Regular enemy packs can easily kill players if they blink at the wrong time, but bosses require an even greater degree extended precision. The final boss fight took me around 10 minutes of constantly shifting action, where a single mistake could send me back to loading a save. The game’s chapter bosses and final boss provide satisfying challenges.

The customization system allows players to take standard weapons such as hammers, swords, and axes and tailor them to specific playstyles. A sword pommel and blade may be enhanced for additional damage, fire attacks, stagger chance, and more. Players can also craft a handful of consumables on the fly like healing potions and traps. If you get stuck in a fight that seems impossible and you’ve exhausted other options, don’t forget your traps – they can deal considerable damage to baited foes. These options ensure players have flexibility. Feel like smashing foes down so they can’t fight back or use their abilities? Grab a two-handed hammer and load up on stacking interrupt boosts and pummel your foes into the ground. Just going for damage?  An outfitted two-handed sword may be what you’re looking for.

Players can select a sidekick for quests and free-adventuring that complements their playstyle. You have a number of options that are all traditional RPG roles – an archer, a few types of mages, knights, etc. You can further define their assistance role by changing their settings. The AI can be frustrating and foolish at times, so making sure that you’ve locked in their combat style in the options menu is a must. I recommend choosing a mage assistant with a focus on crowd control, which was highly effective for me and made tough battles much easier. You’re able to generally switch out and play around with your helpers at will, and even build relationships with them outside of combat through dialogue and quests. Each companion has a clearly defined personality; the sarcastic and bubbly skeleton, the outcast witch, and the knight who constantly refers to himself in the third person flesh out a fun cast of supporting characters.

Unfortunately, the foes you face aren’t as interesting as the allies by your side. Enemy variation leaves much to be desired; for the latter half of the game, you’re fighting the same handful of enemy types for hours. While this gives you the opportunity to become incredibly familiar with their attacks and how to beat them, it is also tedious. The combat is crisp, but the ability selection outside of your main swipes and swings is small, and the action starts to feel stale.

Game-changing decisions help to keep the journey interesting, as you either fight off or embrace the demon inside you. If you choose to go evil, you gain interesting abilities with some trade-offs. Your demon horns are cool and all, but you’re not going to be able to wear helmets. Opting to go good will change the direction of your adventures, and you get other perks to make up for not letting the demon out. I went evil early on and regretted it by the end – not because of the abilties, but because I began to feel like an absolutely loathsome human being. When they say evil, they mean it; you do some absolutely appalling things that you don’t have a vote on once you’re good and corrupted. Your choices and your interactions with companions factor heavily into how events play out along the way. While the plot itself is akin to a B-movie or worse and the dialogue laughable at times, decisions like choosing to slaughter your commander or leaving elves to die have repercussions. Your elf companion, for instance, doesn’t like to see his kin abandoned and will come at you later – and only one of you survives.

A skilled player doing no sidequests and blowing through dialogue can complete the game in about 10-12 hours, but this is sacrificing a ton of content both in the quest, exploration, and relationship-building categories. When you invest the time to master the challenging combat and explore the world, Bound by Flame is a solid romp with rewarding tactical action supported by rewarding boss battles and plenty of ways to see your choices reflected in the world around you.

8
About Game Informer's review system
Concept
Embrace or defy the demon within as you weave through a traditional fantasy RPG world
Graphics
Looks great, though some weird quirks (like the running animation) are off-putting
Sound
Dialogue is fully-voiced and the soundtrack is powerful, especially during boss fights
Playability
The controls can be challenging at first, but I got comfortable after an hour or two. Even so, I recommend using a gamepad. Difficulty can be changed as you play, but I recommend the easiest difficulty setting for beginners
Entertainment
Fun combat, customization, and decision making overpower the cliché plot and monotonous enemy lineup
Replay
Moderate 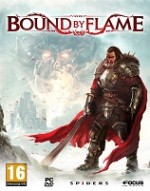