Last generation, Borderlands became Gearbox's prized series, and the developer has been vocal about not tackling Borderlands 3 until it has enough new ideas to do the game justice. In the meantime, 2K Australia has stepped in to keep the money train rolling with Borderlands: The Pre-Sequel, a humorous detour that takes players to Pandora's moon, Elpis. Despite featuring four new playable characters and a few novel features here and there, The Pre-Sequel feels like more of the same, which is both good and bad for fans of the series.

The Pre-Sequel takes place before Borderlands 2, and details Handsome Jack's transformation from being a pretentious but well-meaning hero to one gaming's most delightfully detestable villains. 2K Australia weaves an entertaining narrative around what players already know of the characters and timelines of the previous games, and even though the writing is still more sophomoric and annoying than it is clever, I enjoyed watching Handsome Jack's flaws bubble up and learning more about the manic and humorous universe.

Unfortunately, other aspects of the game don't fare as well. Borderlands' signature visual style has lost some of its luster over the years, which is exacerbated by Elipis' bland and monotonous landscape. The texture pop-in is especially atrocious; the series always struggled to load in hi-res textures fast enough to keep up with the player, but waiting for blobby characters to slowly come into focus is a shortcoming I'll be happy to bury with my last-gen consoles. 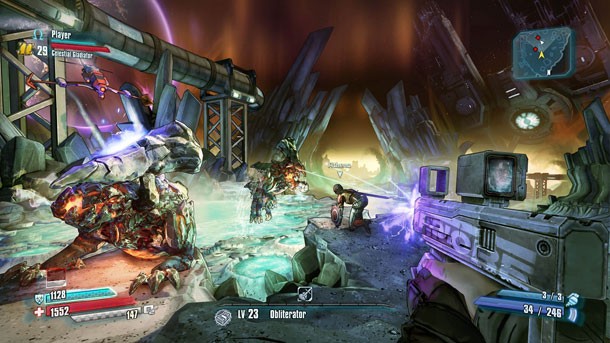 On the gameplay side of things, 2K Australia hasn't made too many changes to Borderlands' familiar and addictive gameplay loop. You still level up your character with a variety of upgrades and skills while collecting, using, and selling an endless selection of guns and equipment. However, while other loot-focused action games have made great strides in streamlining the collection process, Borderlands suffers from the same old inadequacies. You still spend too much time sifting through junk loot, selling off old and unwanted items, and opening countless crates to restore ammo and pick up paltry amounts of cash. Comparing item stats and managing your inventory hasn't gotten any easier, and the quick travel system still requires slogging through long stretches of the environment just to get to the appropriate kiosk. The Pre-Sequel offers up some new enemy types, but they rarely require different tactics aside from what elemental gun type to use.

The biggest gameplay changes revolve (or orbit, as the case may be) around Elpis' atmosphere. The low gravity makes bounding across environments and vertical exploration easy and fun. The O2 system, which requires players to periodically replenish their air supply, is rarely a hindrance, and adds a welcome layer of control while floating through the air. The best addition is the buttstomp, which rockets you down on top of foes and unleashes an area-of-effect explosion. However, these gameplay tweaks come at the cost of more mobile enemies (who share all your new moves), and targeting foes floating above you is as obnoxious as it's always been in first-person shooters. Other additions like laser and cryo weapons are nice, but hardly revolutionary. 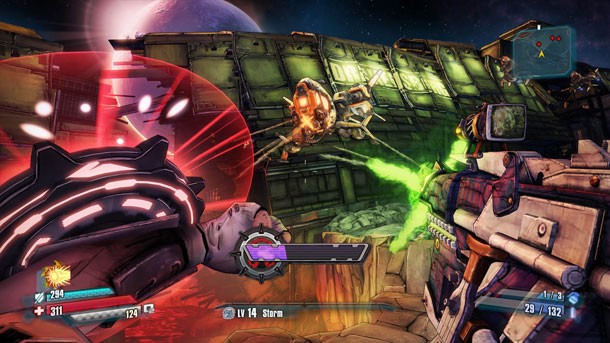 It didn't take me long to get back into the swing of things, and despite the mostly old annoyances, The Pre-Sequel kept me entranced like the first two games. However, my enjoyment was repeatedly stymied by balancing issues. Sticking to the story missions will quickly leave you under-leveled, and most of the side missions don't dole out enough XP to make them worth your while. The Pre-Sequel's boss battles are especially frustrating, and create a punitive loop for players struggling with the level curve; respawning after you die costs you money, but because crates don't replenish – and the boss enemy's health and shields do – purchasing replacement ammo is often your only option to rearm before heading back into the fight. On more than one occasion, the solution for beating a difficult boss was to leave, grind out a few extra levels with side missions and killing random enemies, then come back and employ the same tactics. Like previous games, The-Presequel isn't just better with friends, it's balanced for co-op, and playing solo feels like a chore.

Ultimately, those who just want more Borderlands are getting their wish. The Pre-Sequel offers plenty of missions, completely new environments and playable characters, and one of the more interesting story threads of the series. If you're looking for more from Borderlands, however, The Pre-Sequel falls short, and it will take more than laser blasters and buttstomps to put the series back at the top of my must-play list.

Note: This review pertains to the Xbox 360 version of the game. Borderlands: The Pre-Sequel is also available on PlayStation 3 and PC.

The Pre-Sequel feels like more of the same, which is both good and bad for fans of the series.

Purchase More Info
7.5
i
Game Informer's Review System
Concept Offer players another Borderlands adventure without making too many changes to the formula
Graphics The artistic visuals of the series aren't as dazzling anymore, and the limitations of last-gen hardware are more noticeable than ever
Sound Most new characters sport Australian accents this time around, and fit right in with the series' amusingly irreverent tone
Playability The gunplay is as tight as ever, but the added verticality means you'll spend more time trying to shoot enemies out of the sky
Entertainment A couple of co-op buddies and a strong desire for more Borderlands are vital for enjoying the game
Replay Moderate