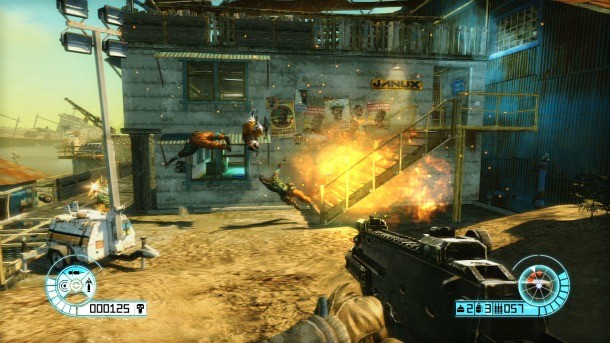 The 2006 shooter Black from Criterion was generally well-regarded by critics and pushed the limits of what the PlayStation 2 and Xbox could handle. Bodycount was originally conceived as a spiritual successor to it, but since Black senior designer Stuart Black left Codemasters last year, pairing these two projects seems odd now. For the sake of Black’s legacy, it’s best that they remain distanced.

You control an elite operative of The Network sent in to solve unresolvable conflicts throughout Africa and Asia. It doesn’t take long to uncover that hi-tech villains The Target (not the store) are the real bad guys behind everything. You have some generic woman barking orders in your earpiece throughout the first half of the game (seriously, she doesn’t even have a name). Then she takes off after a raid on her base, thanks you for your help, and never comes back. It’s not like you have any connection with her anyway, but it still feels like lazy storytelling.

You’ll fight through large maps like a sunny shantytown or nighttime docks and then walk through a door into a Portal-meets-Tron Target base. This jarring change of aesthetics doesn’t feel natural and only really signals that you’re trading open areas for corridor shooting. The bland missions are really just a series of waypoints you have to run to, and sometimes you’ll hit a button when you get there. Other times, you’ll get to a locked door and have to run down the hall to press the “unlock door” button. Occasionally, you’ll hit a button and have to battle waves of enemies while some nondescript computer hacking goes on in the background. This comprises 95 percent of the missions. No joke.

For the most part, gunplay is tight, and the more advanced weapons you get later in the game feel significantly more powerful. Grenades are the most satisfying, with their wide blast radius and surprising accuracy. Watching bodies fly through the air looks cool as foes do stuntman-caliber flips rather than floppy ragdoll animations. You’ve also got four useful temporary power-ups (invincibility, air strike, super ammo, and a kill-everyone electro shock), but since they’re tied to the d-pad you have to be careful not to hit the wrong one when playing on 360. These abilities are unceremoniously bestowed upon the completion of levels, rather than integrated interestingly into the story.

Combat’s biggest flaw is the leaning system. When you pull the left trigger to use iron sights, the left stick stops controlling movement and changes over to leaning. This means every time you want to aim precisely you have to stop dead in your tracks and become an easy target. You can get around this by only pulling the left trigger down partially, but who does that in the middle of a tense firefight? This is particularly frustrating since one of the main features of the game is destructible cover, so you never really have time to hang out and peek around a wall. I usually only had a quick moment to reload and heal up before firing a few shots and zipping to the next area.

There is a Bulletstorm-style skill shot system, but without any incentive to use it. You can build a multiplier with actions like using explosives or getting headshots, but it only contributes to your level score. This posts to the leaderboards and that’s it; you won’t find any in-game rewards for high scores. No, thanks.

In a bad sign for a shooter, I had more fun seeing how long I could go without killing someone. You can easily sprint past the brain-dead enemy AI in many levels. They’ll halfheartedly shoot in your general direction but will not give chase. Even when you decide to fight them, they’ll often run right past you, run away from you, or just stand with their backs to you without moving. A couple times I saw an enemy throw a grenade into a wall and just stand there until it blew up at his feet.

This all adds up to a single-player campaign that’s five hours long at the most. The only exciting moments I can recall from that time are the two boss fights, both against the same person. The K-8 Nemesis Widowmaker wears a Tron-style jumpsuit and flips around while blasting you with a special rapid-fire gun. Normal guns don’t hurt her. You have to use airstrikes or launch missiles to do damage. It’s a nice change of pace and just the right amount of difficulty. Though what looks like a real person’s mouth grafted onto her character model is just plain wacky.

The co-op mode is only a generic Gears of War 2 horde mode rip-off with no unique elements whatsoever. As I’ve said, the campaign isn’t good, but bringing co-op to that aspect of the game would mean that you’d have some company as you suffer.

Continuing in the tradition of hitting the lowest common denominator, multiplayer only has a handful of maps and the only modes are deathmatch and team deathmatch. As expected, the multiplayer has no progression system. It’s so barebones that I wonder why Codemasters even bothered including multiplayer at all.

It’s clear that the team didn’t have the time and resources to really do Bodycount right, and the departure of at least two high level people during development didn’t help either. What’s left is a bland and essentially incomplete game that fans hoping for more Black, or simply a decent shooter, will be disappointed in. 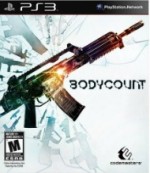 How does Codemasters' supposed spiritual successor to Black hold up?

Purchase More Info
5
i
Game Informer's Review System
Concept Come up short in the campaign, multiplayer, and co-op
Graphics The muddy visuals and poor textures make the game look five years old
Sound Generic battle noises loop in the background during some multiplayer maps, concealing where the real fights are taking place
Playability A useless cover lean mechanic makes it needlessly difficult to move while aiming down the iron sights
Entertainment If you’re looking for a brainless shooter that rains down achievements and trophies, this is one of many available options
Replay Moderately Low