Another victory lap for developer Bizarre Creations
by Matthew Kato on May 25, 2010 at 07:30 AM
Publisher: Activision
Developer: Bizarre Creations
Release: November 3, 2009
Rating: Everyone 10+
Reviewed on: PlayStation 3
Also on: Xbox 360, PC

Blur developer Bizarre Creations has a history of thinking outside the racing box. The Project Gotham creators made a name for themselves with that series’ Kudos system. It asked players to think about the race within the race – driving stylishly and on the edge was just as important as crossing the finish line in first. That same spirit is found in Blur, although this time winning the internal battles by abusing other racers at every turn is synonymous with coming in first place.

Blur is a game built on versatility. Power-ups aren’t simply offensive or defensive; they are tools you can use in different ways depending on the situation. A Barge blast is always handy to disrupt any cars in your immediate vicinity, but it can also be deployed as a momentary shield. Likewise, most power-ups come with an alternate fire option. For instance, your garden-variety Nitro boost can alternately be used to slow you down – useful for those really tight corners.

There are many ways to play Blur apart from how you use your power-ups. Earning fans (which is how you level up and unlock cars) is easy, and even when you’re not getting them for doing stuff you’d normally do – like ramming someone with a Nitro boost while you’re in mid-air – the game gives you plenty of opportunities. There are always mid-race challenges that garner fans for doing things like hitting someone with a Bolt missile while you’re drifting or passing through a dozen checkpoint gates.

Unlike Mario Kart, Blur doesn’t embrace randomness or engineer worst-to-first finishes. Power-ups are in the same position each lap and are never randomized, so you can plan ahead for when you can grab that Shield or lightning blast. You can also see what everyone’s carrying, so you know when to make your move against a weak opponent or respect their strength. Finally, Blur lets you manage three power-up slots and drop power-ups at any time. You can stock up on three speed boosts for that long straightaway, for example, or concoct a triple threat that’ll earn you lots of fans when they destroy the field. The best thing is that the game doesn’t favor one particular kind of strategy.

Blur features boss battles, and while I like the idea, I’m torn on the fact that to unlock them you have to go through set criteria first. Most of these you meet simply by doing what you do best, but a few are so specific (like reverse Shunting five cars), that occasionally I felt like I was having to grind races just to meet one of the goals. The cars you win from the bosses feature mods (which give you in-race bonuses), but I’m surprised these aren’t as prevalent as in the multiplayer where you have cars with multiple mod slots and the ability to manage different mod loadouts. Blur’s online multiplayer feeds your hunger for earning fans and leveling up, and it’s one of racing’s best online multiplayer modes.

Blur is the thinking person’s death race – if there is such a thing – where your mind is racing just as fast as your motor. 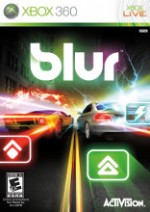 Blur is a never-ending romp of power-ups, revenge, and explosive finishes

Purchase More Info
8.5
i
Game Informer's Review System
Concept Blur takes Mario Kart’s power-up template and blows past it with ease
Graphics The game runs fast and smooth, and the effects that accompany the power-ups can dazzle
Sound Opponents’ Shunt blasts make a warning sound before they race up your tail pipe
Playability Toggling through your three power-up slots and deploying or dropping them is easy even at fast speeds
Entertainment Even an avowed pacifist would enjoy sending power-up after power-up at their opponents
Replay Moderately High