BloodRayne has an interesting past. The first two games garnered decent reviews from critics and fans, but the series all but died in 2004. In the seven years since, Uwe Boll’s awful trilogy of movies dragged Rayne’s once good name through the mud. Now Majesco is trying to bring the franchise back by re-teaming with WayForward to deliver the same magic the developer sparked with A Boy and His Blob.

At first glance, BloodRayne: Betrayal seems like a slam dunk. The tone of a Castlevania game blends effortlessly with the gameplay of NES-era Ninja Gaiden. Rayne’s beautifully animated attacks slice through foes, while her guns offer ranged blasts. A variety of combos offer an assortment of attacks for pushing enemies away, launching them in the air, and stomping down from above. Rayne’s dash (in mid-air or on the ground) is absolutely essential for platforming and dodging attacks or projectiles. Sucking certain enemies’ blood gives you a satisfying and vital health boost, and a brief suck infects foes, allowing them to be detonated at will. All of this adds up to wild fights with plenty of options. Most of the large-scale boss battles offer a healthy challenge, but after a few failed attempts you can usually identify their patterns and overcome them.

Adding to the variety, Rayne can also transform into a raven to fly through spike tunnels and dodge hazards such as large buzzsaws. If you’ve ever played the notoriously tricky electric seaweed swimming level in the original Teenage Mutant Ninja Turtles NES game, you know what to expect here. Surprisingly, these sections rank relatively low on Betrayal’s difficulty scale. This game loves to punish the player.

So many parts of this unrelentingly hard game will haunt my dreams forever. Outrunning a speeding buzzsaw while jumping across pits of acid as moving platforms get ever smaller. Battling several waves of enemies while electricity zaps random sections of the screen and then fighting a boss immediately after with no checkpoints. Hopping between small bugs to stay in the air over an enormous pit while dashing past moving buzzsaws. The list goes on and on. Many sections feel like WayForward just tried to think of the most torturous levels possible. Rather than enjoying myself as I progressed, I started to dread whatever new merciless deathtrap was waiting around the next corner.

It’s not just the agonizing level design that fuels the frustration. The jumping works fine for combat, but it’s too floaty for the intense platforming the game demands. Rayne also goes from standing to sprinting immediately, so it navigating small platforms is more stressful than necessary. When combat mixes with hazards, it’s too easy to accidentally do the dash combo and suffer an instant death.

I feel proud for beating BloodRayne: Betrayal, but I can’t recommend it for anyone who lacks an ocean of patience. Majesco’s plan for BloodRayne’s resurrection looked great on paper, but the arbitrary and unnecessary difficulty spikes unfortunately keep this half-human half-vampire in her coffin. 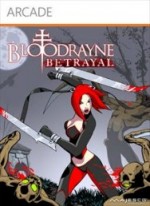 At first glance, BloodRayne: Betrayal seems like a slam dunk, but things fall off the farther you get.

Purchase More Info
7
i
Game Informer's Review System
Concept Bring BloodRayne back from the dead with a tough-as-nails 2D action platformer
Graphics The character designs, animation, and backgrounds look fantastic
Sound The gothic metal soundtrack fits well, and Rayne’s voice actress sings an Evanescence-style song over the end credits
Playability The difficulty borders on torturous for most of the second half of the game
Entertainment What starts as a fun, bloody romp quickly becomes unforgiving. You usually earn an “F” grade for all your trouble
Replay Moderate