For a guy who has a good understanding of the myriad rules and tactics in football, it came as a shock that I was a total novice when it came to Blood Bowl. It turns out the two sports have almost nothing in common. I will say this, though: If you’ve ever seen a football coach smile on the sidelines after a routine play because everything went exactly the way it was drawn up, then you’ll have an appreciation for the strategic intracacies and moving parts that have to come together to perform basic moves in Blood Bowl.

The game uses Warhammer-esque fantasy races (each with different characteristics) in 11-on-11 contests where the objective is to score the most touchdowns. The action features ref bribes, the injury or death of players, dice re-rolls, fan interference, mercenaries, and more as regular occurances. This 360 version adds online play and a new Blitz mode to the classic game that allows you to play in realtime and features equipment upgrades, contracts, training, and other enhancements. These new elements add quite a few cool nuances to the traditional gameplay.

Almost every move you make in the game is determined by dice rolls checked against your player’s attributes and the appropriate modifiers. While this is nothing new, Blood Bowl adds a heartbreaking twist: In most cases a failed dice roll means your turn is automatically over. When I say “most cases,” I’m talking about some fundamental moves in the game like picking up the football or blocking. Consequently, everything you do in the game requires a high degree of risk assessment, and your turn is always a carefully constructed sequence of events with little margin for error. Good players know how to play the odds in their favor, but in the end the game still comes down to the tumbling dice.

If you’re already a Blood Bowl vet, the Blitz mode makes this version worth your time. But even though I find satisfaction in pulling off even the simplest of the game’s maneuvers, setting up all of its dominos is just too exacting for my taste. 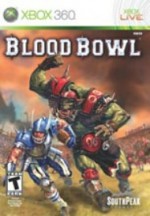 We go more than four downs in our review of the strategic sports title Blood Bowl.

Purchase More Info
7.75
i
Game Informer's Review System
Concept Cyanide Studio transports Games Workshop’s original game to the 360, adding online play and additional (and optional) rules in Blitz mode
Graphics Blood Bowl is not a feast for the eyes (it does have orcs, after all), but being able to zoom in and out of the action at any point is handy
Sound The whimsical announcers are a perfect fit for the game’s tone, which mixes bloody conquest and sports irreverance
Playability Although the HUD provides plenty of important info, some of the game’s more subtle aspects could have been conveyed onscreen instead of leaving you in the dark
Entertainment This isn’t Mutant League Football; this is a hardcore strategy game. Think and act accordingly
Replay High