Blades Of Time Review: A Trip To Dullsville With The Worst Possible Guide
by Jeff Cork on Mar 21, 2012 at 09:03 AM
Publisher: Konami
Developer: Gaijin Games
Release: March 31, 2012
Rating: Mature
Reviewed on: PlayStation 3
Also on: Xbox 360 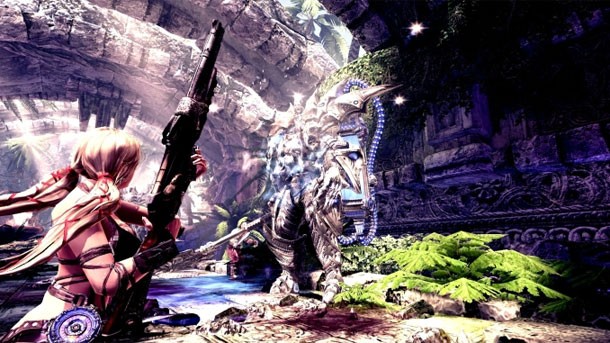 Some people enjoy their entertainment with a dash of awful every now and then. Sometimes you don’t need to be blown away by big special effects or even engaged by competent dialogue; cracking wise can be its own reward. Even die-hard devotees of the “so bad it’s good” school of thought will find little to like in Blades of Time. It’s not enjoyable like a bad movie. It’s more like being dropped off by your parents at a carpet store when you’re 10.

Blades of Time is a spiritual successor to Gaijin Entertainment’s other attempt at a hack-and-slash game, X-Blades. They both feature the treasure-hunting vamp Ayumi, though now she looks like something you’d see airbrushed on the side of a van rather than the hood of a tuned-up Nissan. Gone are the thongs and stockings, replaced by hot pants and thigh-high boots. To further sell Ayumi as more than just eye candy, she speaks with an accent that was presumably shooting for “English countess,” but in reality is “vaguely Bjork-like.”

Ayumi is the worst character I’ve controlled in years.

Her entire characterization is based upon describing what is plainly visible. “This is a desert,” she observes when she finds herself transported to a sun-bleached ruin, circled with sand dunes. “What is that down there, an elevator?” she later asks, her voice tinged with complete astonishment, as she gazes upon the same device she’s encountered countless times. She isn’t sassy, kind, or even cruel. She’s just a person who walks around a bunch of places and says what she sees. It doesn’t help that she’s visiting Dragonland, the least interesting magical realm I’ve ever had the displeasure of exploring.

Ayumi is pulled into this place via a glowing orb, and she has to retrieve an artifact or save the world or escape or something. She’s too busy blathering on about nothing (“I could go for a hot chocolate right about now!”) to make her intentions clear. Dragonland is populated with trapped humans and humanoid monsters, and she whirls through everything with her twin blades and firearm.

Blades of Time boasts a pathetically small enemy roster of uninteresting creeps. You face off against the same armored knights from the opening tutorial through the final level, and even though your abilities will have been upgraded along the way, combat remains just as rote. Ayumi can cast fire, ice, and earthquake spells by building a rage meter, but it’s almost always more effective (and easier) to back away from enemies, find higher ground, and plink away at the idiots as they struggle in vain for a way to get within swinging distance. Ayumi can upgrade her arsenal by using her pie-sized compass to find hidden treasure, though once you find the machine gun you can stop looking.

The closest the game gets to a creative twist comes with Ayumi’s time-shifting ability. Players can rewind time and then play it back, allowing multiple copies of Ayumi to surround foes with a flurry of swords or overwhelm bosses with multiple firearm attacks. It’s a cute gimmick, though it’s mainly used in a variety of switch and door puzzles. I’d rather push stone blocks around than see two Ayumis on my screen simultaneously.

I’m not your financial advisor, and I don’t care how you spend your money. As one human being to another, I feel a responsibility to advise you not to bother with this boring mess. There are way better bad games out there to play, and even more good ones that are worth your time. Unlike Ayumi, you can’t rewind the clock to before you played Blades of Time, and none of us are getting any younger. 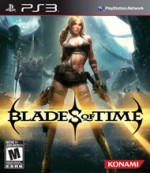 Blades of Time isn't enjoyable like a bad movie. It’s more like being dropped off by your parents at a carpet store when you’re 10.


Purchase More Info
4.5
i
Game Informer's Review System
Concept Players fight monsters with blades and bullets while facing the larger foe of overwhelming ennui
Graphics Heroine Ayumi emotes with all the subtlety of a ventriloquist’s dummy. The environments of Dragonland are exactly as inspired as its name
Sound Blades of Time’s rousing score is a highlight. Too bad it doesn’t drown out some of the worst voice acting of this generation
Playability For all of its hack and slash posturing, the majority of the game can be blown through by merely hanging back and taking potshots at the low-functioning AI
Entertainment The spiritual successor to the stinker X-Blades also gives off a foul odor. Surprise!
Replay Low