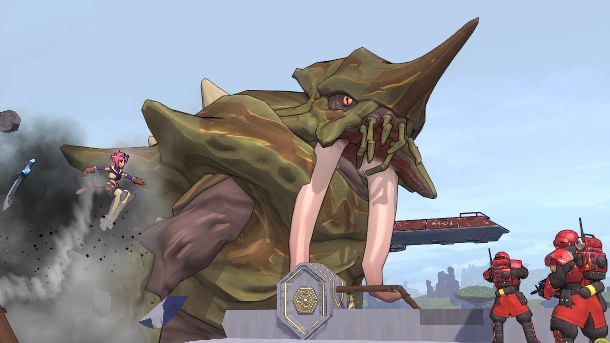 In an age where top-tier games take years to create and require multi-million dollar budgets, the downloadable scene has emerged a place where developers can take a chance on more eccentric projects. Enter Blade Kitten. At its core, Blade Kitten attempts to take the essence of old-school 2D platformers and marry it with the bright visuals and gonzo storyline of a Japanese anime. While Krome Studios has certainly attained the latter, some sketchy mechanics keep Blade Kitten from being as fun as its forerunners.

Blade Kitten stars a pink-haired cat woman named Kit Ballard, who spends most of the game chasing secondary characters due to simple misunderstandings. Blade Kitten simply doesn't have a lot of meat on its frame, but the first half's ending (the game is being released as two downloadable episodes) suggests a deeper plot for part two, and the game's universe has a decent amount of depth in its characters and settings. If you're looking for a deep narrative to go along with the title's ample creativity though, you won't find anything to get excited about. 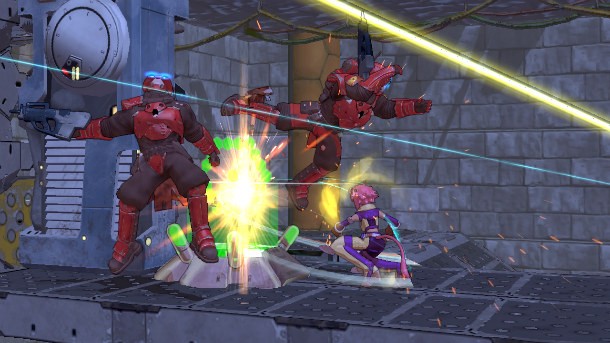 The game wastes little time getting you into the action, which is a characteristic I could appreciate if the gameplay were tighter. Kit's feline DNA gives her the ability to crawl on walls and ceilings, which adds a lot of verticality to levels and gives the platforming a unique feeling. However, the climbing feels sluggish, and despite being half cat, Kit is surprisingly slow when it comes to changing directions. The combat moves at a more satisfying pace, but despite having a reasonable number of actions at your disposal, I rarely encountered an occasion where spamming the basic attack button isn't enough.

Despite some questionable controls, Blade Kitten offers a fair amount of content to consume. Each level of the game is huge, offering exploration more along the lines of Super Metroid than Mario. You'll stumble upon a ton of ancillary paths and treasure chests, but you'll bank so much fictional currency that the extra loot won't really matter. By the halfway mark of the episode, I had already accrued enough money to buy the game's three additional swords (each with different advantages) and a few costumes to boot (which are sure to excite furries).  You can also purchase items that upgrade your health and stamina, but aside from the last annoying boss battle, I breezed through the game without much difficulty.

Ultimately, I appreciate the vibrant and unique world that Krome Studios creates, and despite the substandard voice work, I enjoy Blade Kitten's wacky characters as well. However, aside from a few puzzles and boss battles, the gameplay fails to leave a lasting impression.

6.5
About Game Informer's review system
Concept
Create an episodic action title that appeals to anime fans and furries alike
Graphics
A bright color palette and unique art style are Blade Kitten’s most appealing characteristics
Sound
The funk-infused soundtrack is great. The voice acting…not so much
Playability
The levels are big and varied, but the gameplay suffers from some sloppy mechanics
Entertainment
Blade Kitten has plenty of creativity and charm, but will likely leave fans of old-school platformers wanting more
Replay
Moderate