From the moment Blackwater was announced, you could almost hear a collective "uh-oh" arise from gamers everywhere. Too many factors were in play that almost guaranteed a doomed gameplay experience. You've got a game based on a dubious license, developed by a team with a history of mediocre-to-awful titles, and released for a peripheral that hasn't proved itself conducive to shooter experiences. Most damning of all, however, is this:

I was standing in line to buy Rayman Origins last month when I looked above the counter and saw this video playing. I couldn't take my eyes off it, as it felt like I was watching a YouTube parody of all the lofty promises of Kinect gameplay. Anyone who has ever used the device could name several glaring, hilarious errors in the depiction of Blackwater. After playing through the game, I can confirm the obvious – it plays absolutely nothing like that video, and exactly how you'd expect it to.

Others may point towards the game's license as one of the primary offenders, but I won't claim to know enough about the politics to get into that. I do know that Blackwater has received such bad publicity that they've had to go through two name changes in recent years (they're currently known as Academi), and a quick look at their Wikipedia page showcases numerous lawsuits and allegations levied against the contractor. That said, it's not the ethics of the company that bothers me, it's the atrocious gameplay displayed in the game itself.

If you go to the game's official website, you'll immediately see text proclaiming Blackwater to be "The first gesture-driven Action FPS for Kinect on Xbox 360." Despite that claim, Blackwater is every bit as much of an on-rails light gun shooter as Lethal Enforcers was. The difference is Lethal Enforcers was cool because it let you hold an actual gun and point it at the onscreen baddies. Blackwater inherits all the limitations of light gun shooters, but takes away the genre's main selling point – the gun itself. Instead, it has you waving your arm across the screen to make a reticle hover over the stiff-as-cardboard enemy models. This would be tedious even if it worked well, but the reticle has a tendency to wildly jump across the screen for no discernible reason.

Other gestures are required for actions like grenades and reloading, but their effectiveness is hit-and-miss. I was able to throw grenades without many issues, but I frequently had trouble reloading. Following the gesture guidelines in the manual did nothing, and the only way I was able to reload on a semi-regular basis was to wildly flail my right arm up and down. Every once in a while, you'll encounter a door that needs to be kicked in or a gap that needs to be jumped. Outside of the rappel motion, most of these work fairly well. One of the game's achievements is "Tired Yet?," which tasks players with performing 1,000 of these quick-time events. If anyone plays Blackwater long enough to earn those 60 points, I'm calling A&E to send the Intervention crew to their house.

If waving your arm over mindless enemy terrorists isn't your thing, you can sit back on the couch and play with a controller in you hand. However, this method doesn't make the gameplay any more tolerable. Not only did Zombie Studios fail to implement a dual-analog aiming system that makes sense, they also failed to map the correct controller actions to quick-time events. Whenever I approached a section that required me to crouch, an icon on the HUD clearly told me to press down on the right analog sticks. Makes sense, right? Well, it turns out it really means you have to press up for some reason. I'd love to have seen the QA process on this title.

Glitches pop up on an alarmingly frequent basis, and you shouldn't be surprised to encounter the occasional mission-ending crash. I encountered grenades floating in mid-air in front of my face, audio dropping out constantly during cutscenes, and random enemy screams continuing indefinitely during pause screens. After one cutscene, the game placed me in front of an enemy vehicle that was exploding on an endless loop, and there was no way to proceed outside of restarting the mission.

Bugs aren't the only reason you'll have to start levels over from scratch, however. Despite frequently seeing the word "checkpoint" appear onscreen, the game sends you all the way back to the beginning of the level if you happen to die at any point. On numerous occasions, I'd reach the end of a lengthy level only to get killed by a random soldier that I couldn't get the reticle to stay steady over. In these cases, I had to restart the entire area even though I had hit over 10 separate checkpoints en route to my death.

As atrocious as the gameplay is, the dialogue and characters aren't much better. You'll assume control of Blackwater mercs Smash, Eddi, Baird, and Devon as you progress, switching between characters on a jarringly-frequent basis. Each and every time this happens, you're treated to the same canned "It's all you Smash!," "All you Baird!" type of dialogue. Brief cutscenes between missions try to paint the four as some good ol' boys just doing their duty, but their pasted-on beards have more personality than the cardboard characters they're stuck on.

Blackwater is an awful game on all fronts. It's a transparent attempt to lure uninformed Kinect owners into purchasing a nearly-broken, tedious, two-hour experience under the guise of being an action-heavy FPS. Play the trailer again and mock it with friends...you'll save $50 and probably have more fun. 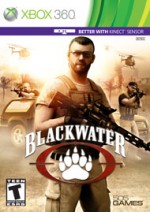 An awful game on all fronts, Blackwater is a transparent attempt to lure uninformed Kinect owners into purchasing a nearly-broken, tedious, two-hour experience under the guise of being an action-heavy FPS.

Purchase More Info
2
i
Game Informer's Review System
Concept Make a broken light gun game based on a controversial real-life military contractor
Graphics Enemy character models barely move, grenades stick in mid-air, and explosions look like they're from PSone games
Sound Generic music and the same hawk sound effect repeated ad nauseam
Playability Considering it has one primary mechanic, it's amazing that it doesn't even get that right
Entertainment Just awful. It's every complaint anyone has ever had about a Kinect game
Replay Low