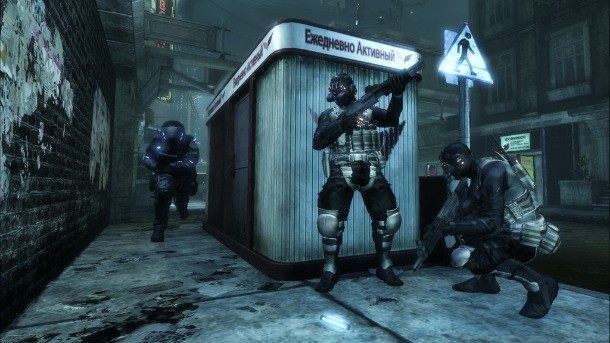 Battlefield 1943 proved that you don’t need to couple a single-player campaign with a strong multiplayer component to attract gamers. Though it only shipped with four maps and a modest progression system to keep players coming back, DICE’s polished downloadable shooter won over critics and broke Xbox Live Arcade sales records.

With Blacklight: Tango Down, Ignition Entertainment and developer Zombie Studios aim to entice gamers with similarly priced multiplayer-only shooter that boasts a healthy selection of maps, game modes, progression levels, and unlocks. If they endowed their project with some semblance of personality and learned to properly balance maps and weapons, maybe it would have had a fighting chance.

Blacklight pits two generic, futuristic armies against each other in a struggle for…I’m not really sure. The game never gave me a reason as to why I was at war, only telling me that a prominent contractor provided my weaponry and that I shouldn’t scratch it while bullets whiz by my head and grenade shrapnel is splintering all around me.

The battle rattle consists of your standard mix of SMGs, assault rifles, shotguns, sniper rifles, and LMGs. As you level up you can customize each kit with new scopes, barrel stocks, muzzles, camo, and a trinket that gives your otherwise generic gun a touch of TGI Friday’s-style flair. As you progress through the 70 standard military rankings, you also unlock new armor and camo options for your soldier.

This wealth of options is compromised by a poorly designed user interface that buries the upgrades in small menus. The menus also do a poor job of communicating how the guns operate differently in terms of stopping power, reload speed, and range.

The only way this arsenal differentiates itself from other shooters is with some semi-futuristic toys. A digi-grenade creates a scrambled, blocky view for soldiers in its blast radius (think digital smoke grenade), and an EMP blinds enemies by temporarily knocking out their HUD, which in BlackLight speech is dubbed a Hyper Reality Visor. Players can also use the HRV to locate enemies on the battlefield, but while using the locator you can’t shoot your weapon and are more vulnerable to fire.

BlackLight’s garden variety of deathmatch and objective-based games won’t win any design awards, but you also can’t knock their tried-and-true value. The matchmaking doesn’t have the same standards to rely on. With no party lobby, the front end isn’t accommodating to large groups of friends and there is no way to make sure you’re all on the same team. But given the lack of activity online, you shouldn’t have a hard time getting in the same match.

When you hit the battlefield, BlackLight takes a turn for the worse. Most of the 12 maps are poorly designed, and since players always respawn in the same place, most team deathmatches devolve into spawn camping affairs where one team sets up a perimeter around the opposing team’s base. The objective modes fare better in this regard, but it’s hard to find a full lobby and the modes do a poor job of communicating your objectives. Expect to play a few worthless rounds before you get the hang of each.

The lightning-quick combat is reminiscent of a futuristic, less polished Call of Duty. Though your HUD says you have 175 health points, don’t be fooled. Most bullets drop you immediately. This wouldn’t be a problem if Zombie balanced the guns and hit detection more appropriately, but that’s not the case. It wasn’t uncommon for me to be killed by a shotgun-wielding enemy from a city block away.

Zombie Studios also built a four-player co-op mode, dubbed Black Ops, based around a series of context-free missions involving securing objectives and shooting anything that moves. Your player can take a few more bullets before he bites the dust in this mode, but with lackluster AI that simply sprays death blossoms and staid level design, you’re better off skipping it altogether.

Though the $15 pricetag is attractive for a robust multiplayer shooter, BlackLight: Tango Down ultimately loses the war to poor level design and questionable balance. There aren’t enough bullets in this gun’s chamber to make the kill count.

Though the $15 pricetag is attractive for a robust multiplayer shooter,
BlackLight: Tango Down ultimately loses the war to poor level design and
questionable balance.

Purchase More Info
5.5
i
Game Informer's Review System
Concept Deliver a fully featured multiplayer experience, but forget to inject the fun
Graphics Impressive Unreal Engine 3 generated environments, but the soldiers move with a minimal animation set. The ugly, confusing menus look like they are ripped out of a ‘90s Konami game
Sound Your standard generic cacophony of gunfire, soldier chatter, and explosions
Playability This fast and furious combat features a competent control scheme, but the jumpy aiming mechanic and gliding movement don’t impress
Entertainment Your $15 is better spent on Battlefield 1943 or a map pack for your favorite multiplayer shooter
Replay Moderate