The downloadable Bionic Commando Rearmed was seen as the good cop to its disc-based counterpart’s bad cop. The former fully embraced the original NES game’s unique charms and blended it with sleek presentation and remixes of classic tunes. Rearmed did well enough to garner a sequel, while the dreadlocked Spencer from the console version isn’t doing anything outside of appearing in Marvel vs. Capcom 3.

With Rearmed 2, developer Fatshark (made up of ex-Grin staffers) was free to go off the rails of the remake train and make whatever it wanted. The best new feature is easily the jump. Swinging through levels now feels much more natural, since jumping allows you to create momentum even if there’s nothing overhead. Purists can beat all the levels without jumping for an achievement, but I’d recommend waiting until you beat the game to unlock the retro difficulty that disables the jump button.

Some fans may miss the hacking sequences or the overhead shooter sections, but I found the sniper and helicopter diversions to be adequate substitutes. These maintain the 2.5D viewing angle and place a massive crosshair on the screen, allowing players to rain down hot fury on unsuspecting soldiers and robots without fear of counterattack. I do miss eavesdropping on doltish enemy soldier conversations as they speak candidly about the upcoming boss’ critical weaknesses. Now the dialog between Spencer and enemies falls flat, and the Teen rating foretells the disappointing lack of head explosion at the end.

Spencer has plenty of weapons at his disposal this time around like a shotgun, bazooka, and a magnetic gun. Most of these only have three to seven rounds of ammo, and I killed myself with the napalm gun more than any enemy. Thankfully, the default pistol more than handles any foe; most of the time I’d only use alt weapons like the electric gun for puzzles, then switch right back to the pistol.

Spencer can also equip an active and passive ability to suit the situation at hand. Passive abilities include things like health or ammo regen, extra speed, or an item magnet that pulls pickups toward you. The active roster features items like grenades, a melee claw attack, and an electro claw. Some abilities are just plain useless, and going to the menu to change them is a hassle. Weapons have a nice quick swap, but abilities require you to dig through menus instead of using something like an instant radial menu.

I mostly used health regen paired with the grenade because they’re the logical offensive and defensive choice. Later I enjoyed using the attack drones, but then another destructible wall would show up and I’d switch back to grenade. The problem is that some abilities are just plain useless, and going to the menu to change them is a hassle. Weapons have a nice quick swap, but abilities require you to dig through menus instead of using something like an instant radial menu.

Even though the levels look different with a variety of backdrops, the underlying skeletons all feel very similar. Outside of a few gimmicky stages like the helicopter rides or an escape from rising water, the levels feel like repetitive journeys from point A to point B filled with the same five easily conquered enemy types. Most stages end with an anti-climactic crossing of an invisible finish line or walking through a nondescript door. I will give credit to the clever stage before the last battle, and replaying levels to search for secret items and complete puzzles is fun.

Bosses don’t require as much creative use of Spencer’s tools to defeat, but they’re a decent enough challenge. I was disappointed that two of them are repeated with very minor changes, and the last boss is easier to beat than a couple of the earlier ones.

Overall, I didn’t like this as much as the first game, but there’s still plenty worth checking out when you get around to it. Rearmed 2 isn’t a “must-play instantly” game by any means, but it still ranks above Spencer’s awful console reboot. 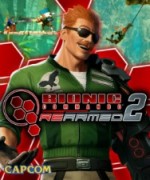 With Rearmed 2, developer Fatshark was
free to go off the rails of the remake train and make whatever it
wanted. But is that a good thing?