The beloved MechWarrior/BattleTech IPs return to the classic strategy space loaded with giant mechanized armors and the pilots who command them. As a longtime fan of the franchise, I was pleased to see plenty of customization options for my mechs big and small, true to form with heat sinks, jump jets, and particle projection cannons (PPCs). However, frustrating gameplay elements, a plodding pace, and frequent “stress to progress” initiatives keep players in tough spots even as they attempt to acquire a bay full of combat-worthy scrap.

The core concept is simple: Bring up to four mechs (and their pilots) into a huge variety of contract encounters. The ability to select missions lets you plan your strategy – picking cold environments for your heat-heavy mechs to excel in, for instance. You also take on simple tasks to earn cash to upgrade your ship, buy weapons, purchase mechs, make repairs, and pay the constant upkeep on everything. The missions run the gamut of purported objectives, but almost always boil down to blasting your way through mechs and vehicles. This focus on meaty combat works out to be more than fine because that’s the real strength of the game; if you’ve played other modern strategy titles like X-COM, you have the general idea of what you’re going to be engaging with.

The action is fun, with enough freedom to try out many different mech configurations. I enjoyed building melee-centric mechs designed to knock opponents down and unleash flamers and machine guns, as well as long-range heat-hogs designed to take advantage of multiple lasers and PPCs. The combat and related customization options are the stars of the show, and make the tactical warfare worth diving into. Preparing perfectly for a battle and letting loose with your creations feels great, and finishing a map with a huge coffer of supplies without taking a scratch is awesome. Most of your time in BattleTech is spent in battle, and that’s exactly where you want to be.

Encounters are accessible and easy to dive into, as all weapons fire by default (you can dial down and select only certain weapons to fire) and you can clearly see your hit rate. Later, you can get more complex with precision shots designed to nail critical stores of ammo or just blow the legs off a bot. While strategy games are not known for lightning-fast action, a sense of unflattering slowness permeates some missions, with actions and turns playing out across many units – especially the lengthier story encounters. Strategy off the battlefield can be more important than on it. Your ship, upgrades, pilots, and mechs all cost tons of money, and you need to keep the lights on while attempting to keep everything upgraded to handle continually more challenging encounters. You’re free to roam the galaxy taking on minor missions as much as you like, but eventually you feel the crunch of the taxman and need to push hard into story content to stay above water. It feels too oppressive at times, putting a ton of pressure on the player to take on story missions to keep mechs up to speed. Stopping to smell the roses can be devastating, especially if something goes wrong.

Having one of your mechs get randomly headshot and blown away can result in a frustrating cost that simply cannot be recovered. Saving often, even during a mission, is essential. “Save scumming” isn’t a practice I advocate for often, but here it must be done to prevent a lucky shot that could literally bury your business in a single salvo. Beyond these design issues, I also experienced myriad crashes and freezes during gameplay that cost me big chunks of time and progress. On the flip side, if you do come up against a foe that might be too much to handle – you can attempt those headshots and hope. If they don’t work, you can load the save. It isn’t a great way to play, but you may feel like your playthrough is backed into a corner sometimes. Despite some gameplay quibbles, the core loop of BattleTech – mech acquisition, customization, and combat – does a great job of adhering to the source material and providing engaging ballistic battles. Crunching an enemy core under your metal boot or scoping out a target for an enormous missile barrage are satisfying as hell, even if the frame of the title could stand for a little extra armor. 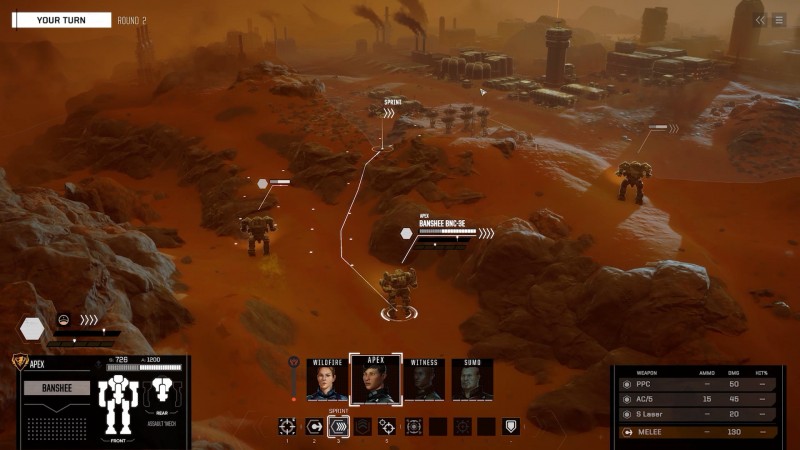 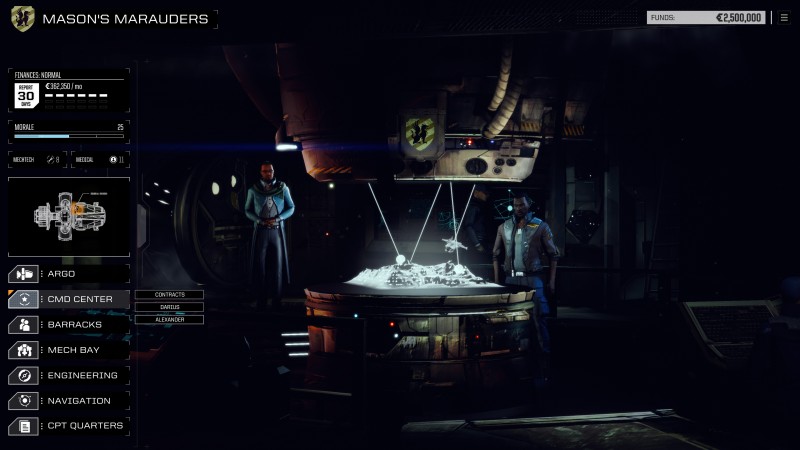 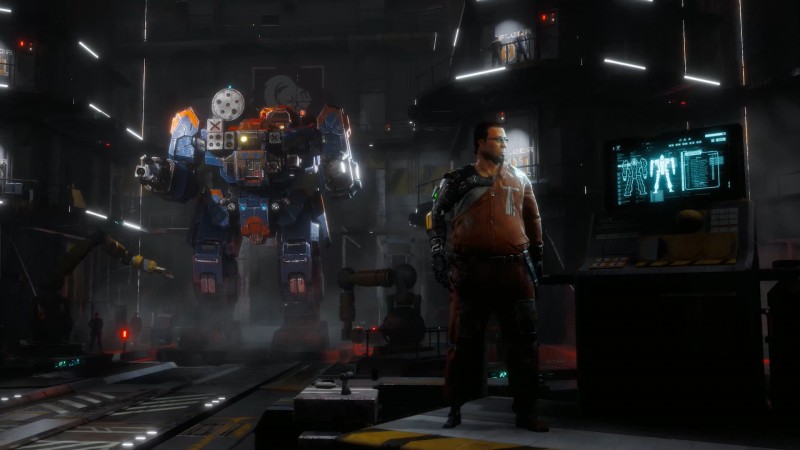 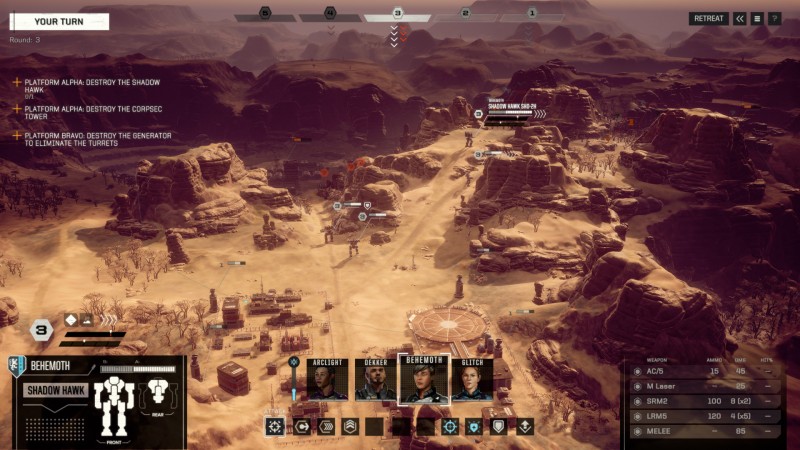 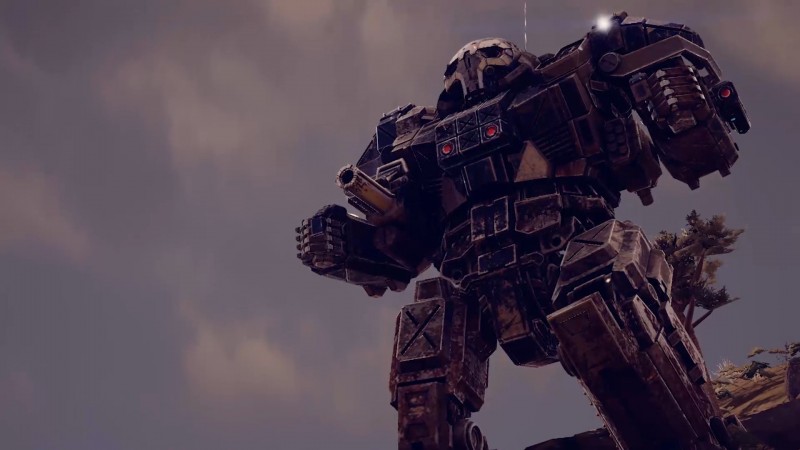 7.5
About Game Informer's review system
Concept
Forge an army of mechs and pilots on a mission to restore order to the great houses of the MechWarrior universe
Graphics
Lacking by today’s standards, but the visuals adequately display scenery, shooting, and the slamming of titanic bodies
Sound
The sounds convey each laser and missile, with a solid accompanying score
Playability
Anyone can jump in and easily grasp the basics, but you must pay attention to positioning, timing, and management to succeed
Entertainment
Lumbering and flustering at times with a dry narrative, BattleTech still provides a solid strategy experience true to its roots
Replay
Moderate 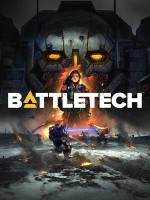