Battleborn has big ambitions. It includes over two dozen characters with unique powers and gameplay. A lengthy campaign explores a universe of planets and cultures. Three objective-based multiplayer modes attempt a strategic competitive experience that combines first-person shooting and hand-to-hand combat in a MOBA-inspired playground. Unfortunately, the implementation of most of these features fails to meet the high aspirations of the concept, and is further hamstrung by moment-to-moment gameplay that is chaotic, imprecise, and unresponsive.

Gearbox has a strong instinct for distinct and varied characters, and Battleborn continues that trend with an entertaining roster of playable heroes. That variety is the biggest selling point. From a ninja mushroom with healing fungal powers to an insane robotic butler sniper, the heroes are unusual and mostly entertaining to discover, and homing in on the playstyles that work for you is satisfying. Like in MOBAs, any given mission or match sees your character fully level up, and the choices you make help further specialize your approach to combat. Consistent play unlocks new cosmetic and mutation options, as well as game-changing gear loadouts, ensuring further investment in your hero, and I appreciate the steady pace of progression.

While I enjoy the varied play, I can’t say the same for the repetitive and banal dialogue that both the heroes and their adversaries spout ad nauseum throughout the plodding storyline. The characters have the smug, self-satisfied attitude of bad ‘90s cartoon stars, with endless sarcastic quips and lame jokes to back it up. A slick animated intro reminiscent of Peter Chung’s Æon Flux lends hope of some stylish action, but as soon as we enter the meat of the campaign, coherent and entertaining storytelling begins to dissolve. The plot never goes anywhere, despite the ostensibly epic setup about fighting to survive the end of all things and save the last star in the universe.

Your progress through the narrative is hampered by the litany of missteps that characterize the eight-mission campaign. While level art and design are colorful and interesting, the action and objectives within those levels are tedious. Enemy A.I. is virtually non-existent; I saw one boss blindly walk around a pillar for three minutes as we whittled away his health bar. Endless wave-based defend and escort objectives crop up in virtually every mission, which is boring at first and excruciating by the end. Combat balance is all over the place, with long stretches of overly simplistic fights, followed by sudden escalations into crushing difficulty. I’d enjoy the challenge, except a single failed objective (or losing all your lives) ends the mission and, if you’re playing in a public team, dissolves the group. Whether playing solo, with friends, or with strangers online, numerous adventures ended after I ventured 45 minutes (or more) into an episode, only to wipe and face a full restart.

Cooperative online play for up to five works well, but I’m disappointed by the lack of drop-in play options, especially since missions often take a long time, and you can’t take a break part way through and return later. I appreciate the inclusion of two-player splitscreen options, but the mode is plagued by miniscule onscreen text and no adjustments to the aspect ratio, resulting in a full third of the screen dominated by mini maps. Public cooperative matchmaking also sees some bad ideas, like the inability to directly select which mission you want to play for all but the final episode, allowing you only to vote on three random options.

Competitive play fares better, despite a painfully slow process for getting into a match. Incursion directly cribs from the established framework of MOBAs, in which two opposing teams of five work to assault enemy territory and overtake defenses, even while escorting minion groups to aid in the attack. These lengthy matches demand teamwork and smart deployment of assets. Meltdown is a variation on the theme, in which the focus shifts specifically to getting the minions to a particular spot on the field, which leads to focused skirmishes around the happily toddling robots. Capture is the nod to more traditional first-person shooters, in which the holding of three zones around the map is the key to victory. Each game type has two dedicated maps that are thoughtfully catered to the style of action. These three PvP modes each have a high learning curve, and it was not hours, but days into the fight before I was able to appreciate some of the strategic elements at play. Understanding your hero and working as a team lends depth.

Even when I finally tapped into a character or two that I enjoyed, or found a competitive match with some engaging give and take, my dislike of the core gameplay remained. No matter the ranged character, shooting feels stiff and unsatisfying. Little beyond a ticking health bar communicates that you’re damaging a foe, and when you’re getting hit, it’s hard to tell where the damage is coming from. Melee fares far worse. First-person, close-range battling is a notorious challenge for developers, but Battleborn hasn’t solved the problem. Run up to foes and wildly swing in their general direction, and the onscreen action becomes an indecipherable mess of explosions, slashes, and effects. This is exacerbated by a choppy animation style, a clash of onscreen color, and strangely flat sound design. On a fundamental level, combat feels disconnected and awkward.

I enjoy Gearbox’s work on games like Borderlands, and I was cheerfully enthused by the studio’s willingness to try something different with Battleborn. The chaos of battle and goofy tone of the team’s latest creation may work for some players, and even as of this writing Gearbox is actively patching balance and matchmaking issues that may improve the experience. But after many hours, many characters, and many matches, I can’t recommend something that so completely failed to click. I applaud the ambition, but not every grand venture ends with triumph. 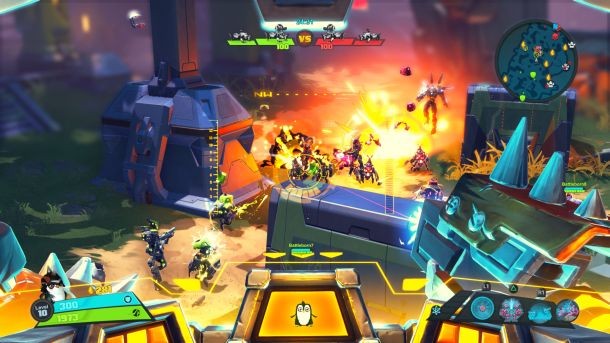 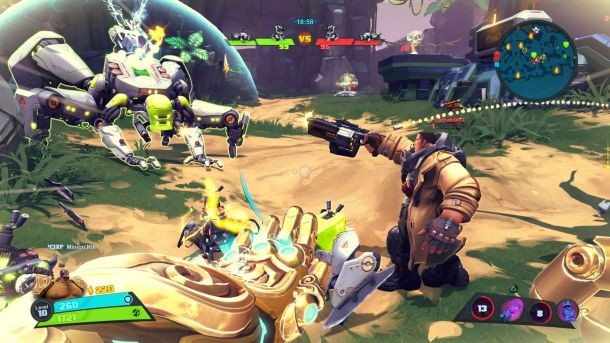 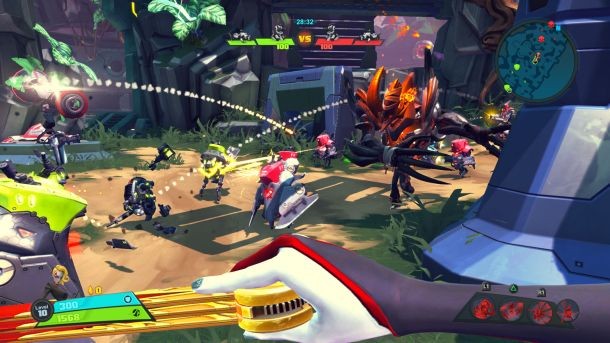 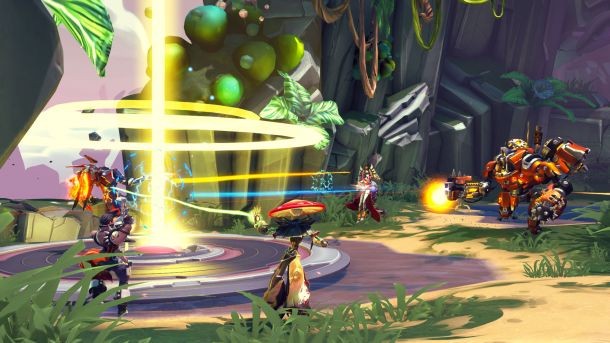 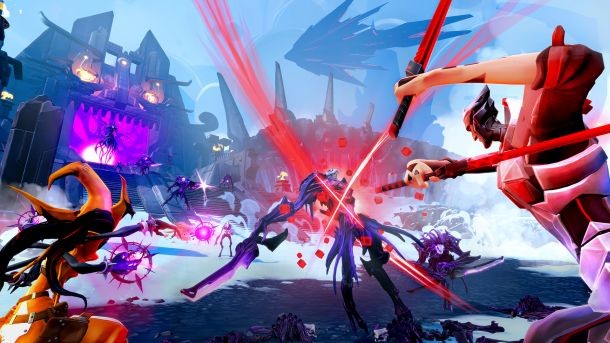 Gearbox has big ambitions with its new hybrid shooter, but the moment-to-moment gameplay fails to connect.

Purchase More Info
6
i
Game Informer's Review System
Concept Guide a kaleidoscope of characters through an unintelligible universe-saving mission, and then drill down into arena-based competitive matches
Graphics Characters look great, but the brightly colored environments, constant explosions, and choppy animation style makes the action hard to interpret, especially at close range
Sound Audio design and music is weirdly distant, and the constant banter and quips rarely hit with the humor they’re shooting for
Playability Numerous characters and their disparate powers are rewarding to master, but the core shooting and melee elements fall flat
Entertainment A varied playable roster isn’t enough to salvage a lackluster campaign and clumsy combat
Replay Moderately Low