The makers of Castle Crashers have not been idle in the seemingly interminable five-year period since their last release. BattleBlock Theater takes the simplest of gaming conceits and polishes it to near perfection. The platforming campaign by itself is as ambitious as a full-fledged Super Mario game in scope and size. Those same levels are redesigned for play with two partners, doubling the fun and replay. Stack on an impressive suite of silly (but skill-based) arena games, and The Behemoth’s new project is easily its most ambitious. Gamers are in for one of the most challenging and engaging entries in the genre since Super Meat Boy.

The story of a shipwrecked group of friends, a theater run by voyeuristic cats, and a magic evil hat is ludicrous. That lunacy is communicated through an ever-present narrator/announcer, who pops off poop jokes and puns like they’re going out of style. The humor is in keeping with The Behemoth’s established tone, and I found myself chuckling and groaning in equal measure. Thankfully, players who get fed up with the ridiculous commentary can adjust his interruptions in the options menu, up to and including silence.

The theater’s feline caretakers are fascinated by watching their prisoners navigate deathtrap-packed mazes, and your unfortunate shipwreck survivor must jump and die for their pleasure. I wondered about the name of the game until I played it for the first time; gameplay focuses on learning the traits connected to a wide array of different blocks that make up the game world, and players use those traits to navigate the many challenges. The game moves at a desperate clip while still forcing players to consider the best path to proceed. Most puzzles are built to be solved by trying and dying, but a generous checkpoint system gets you back into the action right where you left off. As a result, there’s no fear of trying for that hard-to-reach gem or yarn ball.

Those two currencies are spent to expand your collection of character heads and weapons – dozens of options are available, assuring ample content for collectors to enjoy. The game even includes a trading post, in which players can exchange heads and other items during multiplayer in classic baseball card trades.

The game’s solo campaign shines, and is especially challenging in the latter half. Players must complete precise moves with little forgiveness, which may be too frustrating for less-experienced players. Those same levels are redesigned for the two-player cooperative campaign – my favorite feature of the game. The cooperative levels demand players work together to progress, bouncing and flinging each other to otherwise impossible-to-reach ledges. The pacing here is immaculate, keeping both players engaged with the puzzle solving and progression. Few games I’ve played offer such a true interpretation of cooperative play – these are not levels built for two solo players to run through side by side. Instead, each stage makes you think as a team, and win or lose through your partnership.

If you’ve had enough of platforming and puzzling, the arena modes offer more action-focused enjoyment. Playable by four players on or offline, this collection of levels and game modes is wacky, varied, and initially confusing. Characters punch and shoot at each other at frantic speeds, stealing souls, painting blocks, and scoring baskets, depending on the game mode chosen. While chaotic and hard to follow, it would be a mistake to label these battles as button mashers. Time spent in each game reveals twitch skills and smart strategies that can lead to victory, and fans of arena brawlers should find a lot to love. These same game modes can even be confronted cooperatively as a team of four against AI bots, though it’s not as enjoyable as the real thing.

On top of all this, The Behemoth includes an excellent level editor that takes advantage of the game’s simple design premise. Because everything is built on uniform square blocks, it’s easy for a new player to hop in and create new stages to entertain the world. The game is new, and so it’s impossible to evaluate these community features at this phase, but a smart system of organization is in place to assure that the best content rises to the top over time. I predict a long life of new content for players to return and discover as the months pass.

Don’t be fooled by BattleBlock Theater’s downloadable format and low $15 price tag; this is a massive game filled with opportunities for exploration, collection, and fun. Solo players can look forward to a great campaign that is only improved with a friend at your side. If no buddies are available, a smart matchmaking system assures you can explore even the story mode with an appropriate online partner. The low-brow humor, unflinching speed, and high late-game challenge may not be for everyone, but longtime platforming fanatics are in for a big treat. 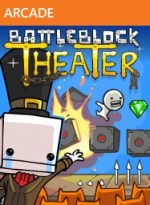 The Behemoth's long-awaited platformer is one of the largest and most ambitious games on Xbox Live Arcade.

Purchase More Info
9
i
Game Informer's Review System
Concept Leap and slide your way through a labyrinthine array of platforming levels and arena games
Graphics Bright and cute is juxtaposed by spike pits and cartoonish dismemberment
Sound The kooky music elicits smiles. The “announcer” is sometimes funny, sometimes grating, but settings allow you to adjust how often you hear him
Playability Simple, intuitive controls are responsive and easy to master, keeping the focus on the action
Entertainment One of the best platformers in years, especially when played cooperatively
Replay High