What would a Batman game be like if his feet were glued to the floor? That may sound like one of the worst decisions a developer could ever make, but Rocksteady Studios turns this improbable scenario into an engaging experience in Batman: Arkham VR, a short narrative-driven game designed exclusively for PlayStation VR.

Batman stands stationary throughout most of this adventure, but his detective skills and wonderful array of gadgets are put to good use. Rocksteady’s other Arkham games give us a more complete look at Batman’s multifaceted capabilities (skilled combatant, acrobatic city navigator, etc), but this VR experience does one thing better: it brings you directly into his suit, and I can’t stress just how cool it is to see Gotham through his eyes.

When you put on the VR headset, you can’t help but think you are dawning the pointy ears and mask. Rocksteady hammers this sensation home numerous times – most notably with mirrors that show your transformation into the Caped Crusader. Having Batman stare back at you and mimic your subtlest movements in a mirror is surreal, and it looks great. If you lean into the mirror, he leans in with you, and gets uncomfortably close.

Although Batman can’t move about an environment freely, two Move controllers double as his left and right hands. As beautifully rendered as Gotham is, immersion is slightly lost when you look at his hands, which are not connected to any limbs, making him a more likely relative to Rayman than Thomas and Martha Wayne. When you look down, you also won’t view Batman’s body, and instead see a floating utility belt outfitted with batarangs, a scanner, and a grapple gun.

Regardless of the ghostly design, Rocksteady does a decent job with the gameplay, which stems from basic hand movements. Simple gestures are your main form of interaction, like reaching out to press a button or open a drawer. You can also toss a batarang at a stationary target (with the heaviest of auto-targeting applied), or aim the grapple gun at a highlighted spot to reach a new area.

I’m disappointed that the batarang requires little in terms of precision (you basically just have to move your wrist), but using the scanner to hunt for clues is good fun, and it works well. I ran into some instances where the PlayStation camera lost track of my hands and they disappeared, leaving me with no way to interact, though these moments didn't disrupt the fun for more than a few seconds. The precision the Move controllers enable is captured best in a one-off gameplay sequence where Batman has to reconstruct a broken item in 3D space. You have to rotate the objects and connect them properly; enjoyable moments like this are more Batman: Arkham VR’s specialty than meaty gameplay chunks. Regardless of how little you actually do, the points of interaction are designed well, and reinforce the feeling you are doing the kind of detective work only Batman can accomplish.

So what is Batman doing in this game? Rocksteady begins this short story (40 minutes to an hour) with a scene we’re all familiar with: the death of Bruce Wayne’s parents. Through VR, we now see this tragic event unfold through the eyes of young Bruce, who is standing behind his parents as the crime unfolds. Seeing it from this viewpoint is disturbing, but shows how much this gaming medium can amplify the intensity of a particular scene. This moment offers no interaction (other than turning your head), and like a lot of sequences in Batman: Arkham VR, is more of a movie than a game.

After this brief story moment, the game shifts to Wayne Manor, where trusty butler Alfred alerts Bruce that something terrible has happened. Batman is needed, and Bruce must get to the Batcave as quickly as possible. As luck would have it, the piano he is standing beside holds a secret entrance to his crime-fighting lair. To access it, Bruce simply needs to enter a melody on the piano keys to make an elevator appear. At this point, the player simply needs to reach out and touch the piano (although I banged on it like Animal from The Muppets). The elevator appears below you, and descends into the cave, a great moment that shows how VR can bring a fictional world to life. Bruce quickly learns that Robin and Nightwing have gone missing. Robin's tracking beacon is no longer working. As I was learning of this distressing development in the Bat family, my focus was elsewhere; instead on the wonders of the Batcave (T-Rex and all). As fun as it is to look around, I wish there was more to do here. It’s more of a museum tour than a place of importance for the game.

After locating Nightwing’s tracking beacon, we are whisked away to a crime scene (something that you definitely won’t see coming), and Batman needs to search for clues. This short sequence begins with Batman recreating the crime through holograms (much like the technology from Batman: Arkham Knight). All the player has to do is rewind and fast-forward the murder sequence to spot specific things that will reveal a clue leading to the killer. The challenge comes from looking around 360 degrees to see if you are missing anything. When you spot something, simply pause the footage and it will be added to the evidence log. That's all you do here.

Regardless of the light gameplay integration, this sequence shows us just how fun it is to get up close and personal with Batman’s friends and villains. You get closer to most of them than you probably ever would want to. These intimate encounters also provide a great look at the artistry and detailing Rocksteady includes into its character models.

The game is gorgeous, and seeing Batman’s world from his viewpoint is cool (I can't stress this enough). The game can be completed in one session, and offers little in terms of challenge, which is a bummer because you can see how these gameplay trappings could be used for enemy encounters or more elaborate sequences. The puzzles are fairly simple, but are interesting in design, taking players to the morgue, a rooftop, the sewers, and even a location that Rocksteady can’t seem to get enough of. Rocksteady does a nice job of changing up the gameplay designs in each of these areas, but again, you only have a few tasks to complete in each of them. There isn’t much meat on this gameplay bone. If you eat up this experience, you can jump right back in to New Game Plus to search for hidden Riddler trophies.

Yes, Batman: Arkham VR smacks of a proof-of-concept demo for VR, but even so, it’s a nice treat for Batman fans, and one of those experiences that you’ll want more of.

7.5
About Game Informer's review system
Concept
Don the mask of Batman and see the horrors of Gotham through his eyes
Graphics
Every bit as detailed and gorgeous as Rocksteady’s core Arkham games. The sense of immersion brings players closer to twisted villains than ever
Sound
Excellent dialogue and voice work flesh out another fun Arkham story
Playability
Batman can’t move his feet and he never raises a fist against anyone. Instead, the experience focuses on his detective skills and gadgets through fun environment puzzles and story sequences
Entertainment
Even without character movement, Rocksteady shows us that Batman in VR can be an empowering experience. More, please!
Replay
Moderately Low 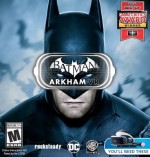