Cherished shooter developer Treasure is back with another edition of its classic Bangai-O franchise. The original game appeared back in 1999 on N64 and Dreamcast, and the series laid dormant until the 2008 release of Bangai-O Spirits on DS. That entry suffered from plenty of framerate issues due to the portable’s low horsepower, but the new Bangai-O HD: Missile Fury has the Xbox 360’s full might behind it to handle all of the wild onscreen action.

Players control a small mech that’s constantly being attacked from all sides. You have a variety of missiles, lasers, and bouncy energy balls at your disposal, though you can only carry two types at a time. Simply blasting foes and dodging around like in any other shooter will only result in death; it’s vital to master Bangai-O’s more advanced moves. A brief invincible dash gets you into and out of terrible danger, and a charge attack sends out a ring of up to 1,000 projectiles into a devastating ring of doom. The closer you are and longer you charge the special, the more damage it does, so putting yourself at risk is a necessity.

The in-game tutorial basically tells you what buttons to press to make these things happen, but to really learn the best ways to utilize them you have to die over and over again in Missile Fury’s punishing levels (of which there are over 100). Fortunately, the next level unlocks automatically after you die on a stage three times. Plus, you can watch replays of the top players on the leaderboards if you’re really stumped to see how they did it.
Once you put all the pieces together, things become a lot more satisfying. There’s nothing like dashing into a cloud of mechanical menace and gunfire and unleashing a charge attack, loading up on an absurd amount of space fruit from fallen foes (which refills your specials meter), blasting out another insane attack, and chaining it all together until you’re the last robot standing. Plenty of stages are more of a puzzle to be solved rather than a test of dexterity. It’s all about finding the right tactics. Many levels require some serious trial and error, and dying in the first few seconds of a stage is not uncommon. Most areas involve moving from one room full of hundreds of enemies to the next until you take down a final boss or several waves of bad guys. A lot of these just blur together, and dying instantly after a single hit from a boss is frustrating after the lengthy ant farm-style level layouts. I would have preferred more wacky stages like the one where you dash into hundreds of soccer balls to launch them at foes, or others where you race against a fuse that will eventually drop blocks to obstruct your path.

Two-player co-op alleviates a lot of the extreme difficulty by doubling the firepower and number of people available to hit switches. It’s a joy to trade off charge attacks, utilize different ammo types, and communicate about the best way to take down a stage. I did experience some lag here and there while playing, but it wasn’t enough to ruin things. Couch co-op players will be disappointed to hear that multiplayer is only available via online or system link.

Missile Fury includes a level editor to concoct your own torturous stages, but this is not LittleBigPlanet. The interface is clunky and confusing, and even if you put in all the effort to make a stage, you can only share it with users on your Xbox Live friends list. I’d love to play an endless flow of community created stages, but that can’t happen with this structure. I guess if you have really creative Bangai-O fans for friends, or you like to make stages for people to drool over on YouTube, this might interest you. Otherwise, it’s useless.

Bangai-O superfans have a lot to chew on here and should enjoy the many challenges, but others should think twice. 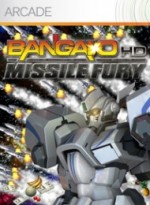 Cherished shooter developer Treasure is back with another edition of its classic Bangai-O franchise.

Purchase More Info
7.75
i
Game Informer's Review System
Concept Put Bangai-O’s insane bullet hell action on a console that can actually handle it
Graphics When the screen is crowded with projectiles and enemies, no amount of high-def can help you see any better
Sound Hearing the chain of exploding enemies after you unleash 1,000 missiles at once is quite satisfying. The music is entirely forgettable, however
Playability The dual stick shooter controls are tight, but you won’t get anywhere without more advanced and complicated maneuvers
Entertainment Shooter fans who love punishment will enjoy the staggering challenge, but others may be turned off by the difficulty
Replay Moderate