The original Badland offered a concise and elegant design; straying too far from those hallmarks would sacrifice its unusual identity. Frogmind’s sequel walks that line, forgoing multiplayer to present a thoughtful evolution of its previous formula. The resulting 30 levels are devious, varied, and beautiful. Simple controls make for an easy entry point, but mastering the physics-based movement to complete all these challenges is a monumental task.

Your flapping, furry creature is once again on a nearly suicidal salmon run to who-knows-where. Along the way, pick-ups change its size, alter the flow of time, shift gravity, and even transform the cute little guy into a roly-poly ball. Other objects spawn clones with the same properties as the original creature, often only to die quick deaths in the jaws of a sawblade, or be left behind in the inexorable march of the scrolling screen. At least one survivor must reach the level’s conclusion so you can whisk away to a new challenge.

Taps on either side of the screen flap or roll in that direction, but as physics properties shift, you’re always scrambling to readjust your sense of weight and speed. The new controls allow lateral movement in both directions, rather than the original’s single-touch, always-right dynamic. Multi-directional options add up to more varied and nuanced level designs.

Badland 2’s greatest triumph is the variety of its navigation challenges, which rarely repeat without some new twist. These navigation challenges are at their best when they maintain the frantic flow of forward momentum. Occasional longer sequences without a checkpoint or slow-paced puzzle moments feel out of character from what is otherwise a joyous and free-flowing experience.

Ambient natural sounds accentuate the strange alien panorama through which you race, even as spinning blades, explosive mines, and jutting spikes abound. The impression is one of ever-present danger amid an idyllic but alien ecosystem. Like the constantly evolving level design, shifting colors and backdrops lend a sense of progression and diversity.

Badland 2 abandons the fun party-game multiplayer options of its predecessor. However, we do get a new online set of challenge levels, in which you can compete against the ghosts of other players in quick but difficult navigation, racing, and survival sequences. Devoted players can also return to the campaign levels to tackle bonus objectives, many of which require enormous precision and lots of practice, providing replay value to a set of levels that might otherwise feel like they lack a reason to play again.

Without reinventing the concept, Badland 2 strives towards new mechanics and variations on its core design. Precision-focused gameplay make this a deeper experience than it might first seem, and Frogmind once again manages to rise above most mobile competitors.

8.25
About Game Informer's review system
Concept
Flap and roll through an alien landscape filled with obstacles and traps
Graphics
Shadowy foreground objects obscure a fascinating and strange world of unexpectedly alien flora and fauna
Sound
Ambient sound effects evoke the feeling of a lush and lively biome
Playability
Simple tap controls eventually require enormous precision to master
Entertainment
Characterized by tight controls and clever design, this is a delightful sequel to one of the best mobile games of 2013
Replay
Moderate 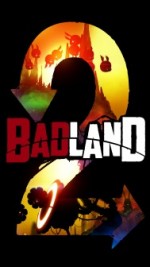