Backbreaker is in an unenviable position. Once designed as a downloadable title to showcase developer Natural Motion’s impressive real-time physics, the company decided to expand the experience into a full-blown retail release. Suddenly, Madden-weary football fanatics and abandoned All-Pro 2K faithful christened it the next big thing, based off the promise of the procedural animation engine and a few short game trailers. Those are unrealistic expectations for a studio’s first game.

Like a rookie struggling to adjust to the speed of the pro game, Backbreaker could use a few years on the practice squad before seeing the field. Though the varied tackling animations and real-time physics engine produce a fantastic array of hits you haven’t seen in a football game before, the rest of the gameplay isn’t ready for prime time. The robotic players move with no sense of agility, poor camera angles on sweep plays fail to focus on the defensive pursuit, and blocking breaks down too often at the line of scrimmage. The result is a feast-or-famine rushing attack littered with an absurd amount of negative carries and the occasional breakaway run.

The passing game isn’t much better. Backbreaker employs an up-tight camera perspective to bring you closer to the action, which makes it tough to scan the field for open receivers. If you spot one, it’s a crapshoot whether the game will highlight the correct one as you flick through your options with the right analog stick while holding the left trigger to focus on the player. Avoiding the free blitzers is tough, so you normally only have time to go through half your progression if you want to avoid a negative play. Once you get a pass off, it’s anybody’s guess where the ball will go. Overthrows, underthrows, and errant passes happen at chance with lesser-to-average rated quarterbacks, and if you throw the ball before a receiver makes his cut, it will break the receiver off his route instead of throwing to the intended location. These inconsistencies and the heads up play of the rival defenses lead to several turnovers and make it tough to pull off a Peyton Manning impersonation.

You would think the inability to consistently move the ball would make it tough to eke out a win. Thanks to the lackluster opponent AI on every difficulty level, the opposite is true. My first team won the championship despite a 40-percent completion percentage and a 3.4 yards-per-carry rushing average on the season, and the AI-controlled teams’ stats were even worse. In real life, those numbers would get you banned from professional football – or a contract with the Oakland Raiders (I’m not sure which is worse).

Poor passing and rushing schemes are enough to draw the ire of a head coach, but terrible refereeing is the quickest way to landing him at Shutter Island. The Brits at Natural Motion must have just skimmed the rulebook, because several of the calls are downright wrong. The refs called an illegal forward pass penalty against my team when my quarterback completed a routine pass in the middle of the field. A roughing the punter call should result in 15-yards and an automatic first down, but in Backbreaker you only get the yardage.

Then there are the random bugs. The worst one I witnessed happened on a punt block. As I waited to return the ball, one of my rushers blocked the kick, picked it up, and started running in circles around the bunched up line of scrimmage. The game wouldn’t allow me to change players and take control of him, so this carried on until he accidentally ran into one of his teammates and fell into the end zone. The following extra point was bafflingly placed backwards at the two-yard line, so my kicker was facing the whole of the field from the end zone and the defense was lined up where I belonged.

On the other side of the ball, the focus on tackling and behind-the-back perspective brings some much-needed intensity to the game. Defense avoids the camera issues that plague offense with a handy left trigger function that centers the camera on the ball carrier. Hunting down running backs, roving passing lanes, and delivering vicious tackles is more fun than in Madden, though switching defenders is disorienting and I wish the game gave me control over jumping to knock down or intercept passes. Given the poor offensive AI, however, the defense easily racks up negative plays, sacks, and interceptions, which robs the experience of realism.

With the AI hardly providing competition, the onus is on other humans to find a challenge. Unfortunately, the split-screen two-player presentation couples with too-tight camera angles to hurt the couch play experience. Online matches are your only honest option.

Though Backbreaker lacks the NFL license, the robust team customization tools give you several options to sculpt your own teams. The Forza-like logo creation isn’t easy to use, however, so only passionate graphic artists will likely be able to replicate the logos of their favorite teams. Backbreaker blocks you from using the names of NFL players past or present, but you can get around this by using initials for the first name or leaving an extra space at the end of the name. The game offers no roster trading functionality to share your creations with others online.

Backbreaker’s two main gameplay modes are shallow, but it’s unrealistic to expect deep modes on par with more seasoned yearly sports franchises. The season mode allows you to customize a 32-team season, complete with stat tracking and a bare bones scouting tool to shore up your roster in a postseason draft. With no free agency, trades, or contracts to worry about, this is your only way of making the team better. The other mode, Road to Backbreaker, borrows heavily from the British soccer leagues. Your team starts you at the bottom of a multi-tiered league, with the goal of climbing the ranks beating increasingly better teams on the way to the top. You can sign new players as you rack up credits similar to the transfer system in the Premiership. If you’re looking for a quick fix, head to the Tackle Alley mode to shuck and jive your way to a high score in the running back minigame.

Natural Motion’s Euphoria technology is a great building block for a football game, but Backbreaker suffers from too many rookie mistakes. Only the most hardcore gridiron fans dying for an alternative to the EA Sports offerings should bother bringing this one in for a look. 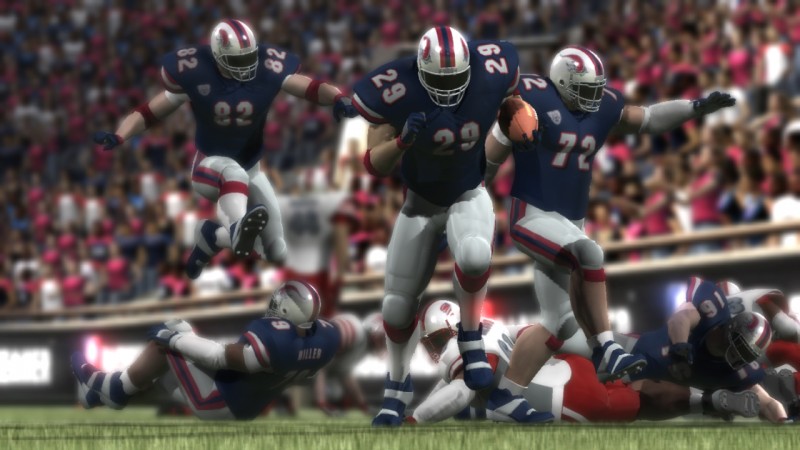 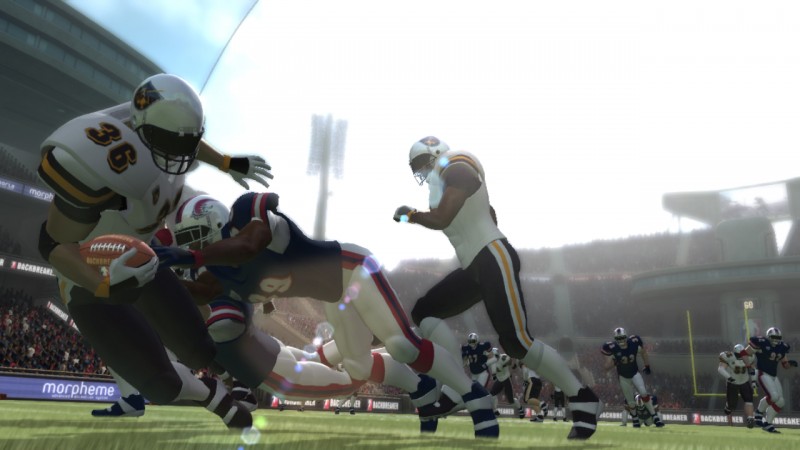 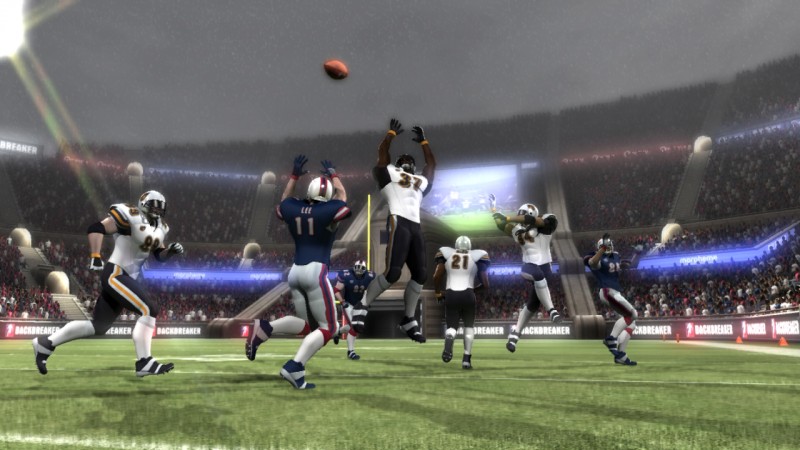 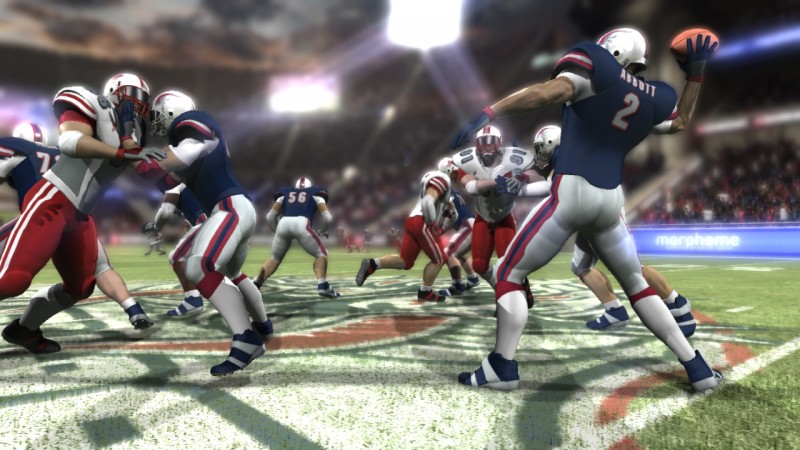 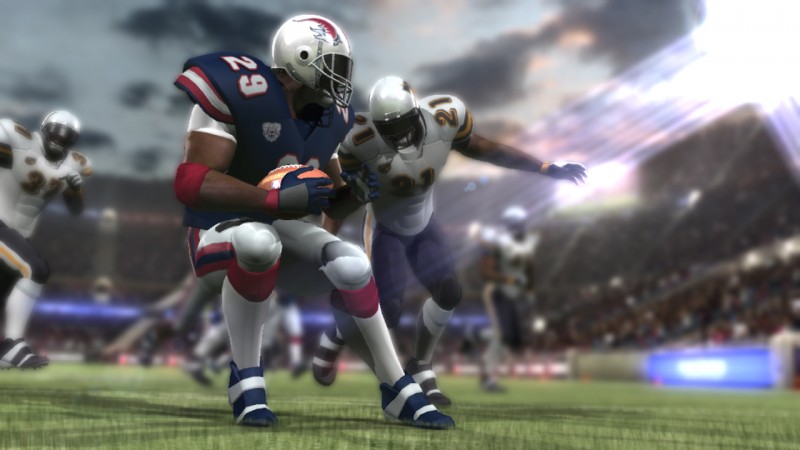 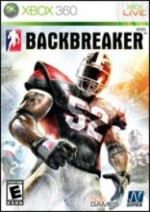 Backbreaker could use a few years on the practice squad before seeing
the field.

Purchase More Info
5
i
Game Informer's Review System
Concept Offer a pigskin alternative with an impressive real-time physics system
Graphics Robotic players have no personality, robbing the game of a sense of drama
Sound Like the first next-gen Madden, Backbreaker foolishly excludes broadcast commentary in favor of basic stadium sounds
Playability The running game lacks agility and the passing game lacks finesse, but roving on defense is fun as long as you don’t switch players mid-play
Entertainment This rookie is very rough around the edges; only football fans desperate for a non-EA Sports title should spend a late-round draft pick on it
Replay Low