Attack of the Movies 3D Review Attack of the Movies 3-D doesn’t deserve its title. The six different levels supposedly center on classic B-movie archetypes, but its schlocky presentation and gameplay lack anything resembling the personality and life of the source material. The fact that the 3D effects do not work is a mixed blessing – the game is so offensively ugly that I didn’t want it getting any closer to me than necessary.

There’s nothing in the way of story or setup in the game. After picking one of six themed levels – haunted house, underwater, giant insect attack, ancient temple, space, and robot invasion – you move a cursor around on screen and blast everything in sight. It’s a shooting gallery in the most rudimentary sense, with poorly animated targets popping into view from predictable locations. At the end of each short level, boss battles pop up, soak up a few bullets, and die before players are unceremoniously kicked back to the level select screen.

Aside from each level’s cosmetic differences, they all play identically. There aren’t branching paths or variations in the gameplay beyond simply superimposing a cursor on each scene’s animated bits and pulling the trigger. A UFO is functionally identical to an oversized wasp or a robotic drone in this game. That lack of ambition is disheartening, but parts of the game are actually broken. More than once enemies appeared behind HUD elements, making them difficult to spot and occasionally impossible to kill. It’s tough to imagine how the devs failed to deliver at least a fully functional version of such a simple conceit.

Up to four players can team up, though if you have that many people in your house at once you should consider coercing them into resurfacing your countertops or doing yard work before forcing this game on them.

The dubious benefit of the game’s 3D effects is offset by its one-dimensional gameplay. Rail shooters don’t get much more tedious, lifeless, or ugly than Attack of the Movies 3-D.

4
About Game Informer's review system
Concept
A rail shooter with levels based on familiar movie genres…in 3D!
Graphics
It’s ugly, even by the most generous standards, and the 3D effects do not work
Sound
There are songs and sound effects, though you’ll be hard-pressed to remember either
Playability
Point at what you want to shoot and pull the trigger
Entertainment
Nearly every rail shooters out there is better than this one
Replay
Low 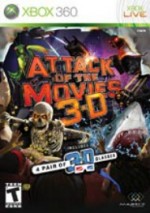 Attack of the Movies 3D