Atelier Sophie: The Alchemist Of The Mysterious Book Review The alchemy- and crafting-driven Atelier series has had a steady flow of releases since its North American debut in 2005, building up a niche fanbase with its fun gameplay loop of moving into a new town and proving yourself as an alchemist. Over the years, the Atelier games have stayed close to their traditional RPG roots – a tendency that puts them at risk of becoming banal. However, developer Gust takes more chances to shake things up with Atelier Sophie: The Alchemist of the Mysterious Book, and it pays off. It emphasizes the series’ best parts (like the alchemy system) and shores up the weaker aspects of the formula.

Alchemy is the heart and soul of the Atelier games, and finding ingredients and combining them to make new items is still exciting enough to become an obsession. The engaging loop of foraging, discovering recipes, and crafting gear for battle made it hard for me to put the game down, giving me a “gotta’ make them all” feeling every time I unlocked a new recipe.

Atelier Sophie adds a new level of complexity to item synthesis that makes it even more satisfying thanks to a material placement system, which gives you more control over the quality of your creations. When you pick your ingredients, you must place them into a grid on your cauldron; ingredients have different shapes and take up a different amount of tiles, making it almost a game of Tetris where you try to find the most optimal way possible to place every ingredient. Material placement can make or break how powerful your creations are, especially since overlapping ingredients nullify surrounding bonuses. I had fun figuring out the most efficient method to give my item the best boosts and quality possible, feeling like I had more of a hand in the final product.

Creating items and traveling took entire days off the calendar in prior installments, but they can now be completed in hours. You can also play at your own pace without strict time restrictions on the main quest, which revolves around restoring a talking book’s recipes. The new time system compelled me to explore more, since I didn’t have to rush to complete any task thrown my way. Exploration is also rewarding as fighting a monster or finding a new area just might spark Sophie to think up a new alchemy recipe.

When you’re not using your alchemy chops or chatting with the locals, you’re out in the field collecting ingredients and fighting monsters. The turn-based battle system is focused on offensive and defensive stances. You can see the turn order on the side to make the best decision. You want to use defensive stances to avoid extra damage, but when you have the upper hand, especially if you cancel out a turn, the offensive stance wastes enemies in a jiffy.

Support attacks/guards, where teammates do a follow-up move or block an oncoming attack for you once you chain enough attacks, return. Having characters in the same stance can also trigger more powerful supports. The issue of party members blocking attacks and taking damage for you when they’re low on HP still exists though, which is frustrating. The battle system isn’t anything groundbreaking, but it requires enough strategy that I paid attention to each turn and didn’t mash my way to victory. Plus, all characters’ special attacks are powerful in their own way, from damaging enemies for consecutive turns to weakening foes’ attack power.

Another delightful improvement is the progression of getting to know the townspeople. In previous games, I thought events with them came few and far between and required way more specific actions to trigger. In Sophie, just visiting them on regular basis unlocked a bevy of events making them feel more consistent. I enjoyed the steady flow of new scenes with these eclectic individuals, which include a puppeteer and a shrinking lady. This isn’t my favorite cast, but a lot of the characters are likeable and remain interesting throughout. This helps the main storyline, which is more rote than anything. The narrative is predictable, and the concept of a magical talking book is a tired trope that failed to capture my interest. Even so, I still found something charming about the characters, with their humorous interactions and desire to band together and help one another. You don’t have to be a series veteran to approach the story, as it’s self-contained; some characters from past entries show up, but their roles are easily understood. Coupled with the gradually introduced new mechanics, this makes Atelier Sophie extremely accessible, and a great place to start for newcomers.

I could go on about more of the refinements I enjoyed, such as the weather system affecting what items you find and the rumors becoming much more useful and easy to track down, but my main takeaway remains the same: Atelier Sophie improves on an already fun and engaging formula. The better progression and deepening of its signature alchemy system makes it one of my favorite entries in the long-running series. Just when I thought things were becoming stale, Gust proves it still has plenty of tricks up its sleeve.

8
About Game Informer's review system
Concept
Learn more about alchemy to fill the pages of a mysterious talking book
Graphics
The cel-shaded visuals are the best in the series, though environments would benefit from more detail
Sound
Fitting music adds personality and intensity to the journey. The voice acting is adequate, but doesn't make or break the experience.
Playability
With a more lenient time system and well-explained mechanics, this is one of the most accessible entries yet
Entertainment
Atelier Sophie makes great improvements, especially with its rewarding alchemy and social systems, which always give you something to look forward to
Replay
Moderate 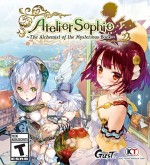 Atelier Sophie: The Alchemist Of The Mysterious Book