Not every game drives its genre in bold, new directions. However, some of the most fun I've had has been from games that find a solid formula and simply refine it. Franchises like Harvest Moon, Animal Crossing, and Pokémon have found success by slowly evolving while staying true to what makes them enjoyable. The Atelier franchise shares a similar story; alchemy is its hook, enticing players to find the best ingredients to top their previous creations. The entries don't make drastic changes, but I am drawn to them because they remain fun and continue challenging my alchemy chops. Atelier Escha & Logy: Alchemists of the Dusk Sky fits the same bill, but the small refinements go a long way toward making it the best gameplay in the series.

The combat and alchemy don't deviate from the usual Atelier set up: Accept quests to journey to various lands where you take down baddies and search for ingredients. Once you obtain new materials, you assess their strengths and see if you can use them in a new recipe. Each ingredient helps create something new, and finding rare ones adds satisfying perks to your creations. The extent of the alchemy is vast; you craft weaponry, health items, bombs, and parts to fix various things around town. Seeing the fruits of your labor - like crafting a powerful new weapon - is what makes the experience fulfilling.

Reaping the rewards of your latest creation is fun, but the experimentation is what keeps you hooked. After learning the alchemy system, you gain access to a disassembly device, which reveals what ingredients make up any item you find, unlocking even more recipes. Additionally, the alchemy isn't simply "throw together the ingredients and call it a day." Synthesis skills alter the basic properties of your creation. For instance, say you want a weapon with a high fire power, you can use the conversion skill to take an elemental value from elsewhere and add it to your fire power. The synthesis skills are varied, also extending to perks like shortening the time it takes to make an item, upping their effect or power, or increasing the quantity. You're always assessing something for the best odds, examining every ingredient to take advantage of everything you've found.

Besides designing your weaponry, Escha & Logy also makes you think on the battlefield. The turn-based battle system stays engaging because it forces you to examine your every move. Positioning matters, as allies in front of an enemy are more likely to be attacked, so you can move your characters around the field to avoid hits. The party is also split into front and back lines; three characters must be in the front, and three others can take supporting roles in the back. The back line members can't be directly attacked, but can be used for support attacks or guards, which are at the root of the entire battle system. Support guards allow you to absorb the damage for another character, allowing you to designate a tank to protect low-health allies. As far as attack supports go, if you fill up the support bar with enough strikes, you can chain attacks together; not only is this beneficial for more hits in a turn, but also the longer you keep the chain going, the damage of each hit increases.

All the systems in Escha & Logy work together well, enhancing the fun. You can select between two different protagonists Escha or Logy, but each story follows a similar path with a few different interactions along the way. No matter who you pick, you're a new government official and must work with the other on assignments. Like past Atelier games, Escha & Logy has an in-game clock, and you must complete assignments by certain deadlines, though the allotted time is exceedingly generous. You have months to complete the main assignments, though they can be completed in a matter of days.

Moving from assignment to assignment can get repetitive. The structure of collecting new ingredients and clearing enemies from fields rarely changes or offers any surprises. To add insult to injury, all the extra assignments are similar, like clearing out a big boss, using alchemy to make a particular item, or delivering a package. With run-of-the-mill side quests that are just a rehash of "kill X monsters in the area," the extra content isn't engaging or attractive. Like any formulaic game, Escha & Logy can get humdrum, especially as you try to burn off calendar days by taking these second-rate quests to get to your next main assignment.

The tedium stings even more because while the basic gameplay is easy to grasp and interesting, the story and characters aren't exciting. These games are known for their charm, but I didn't care for this cast. Expect plenty of anime tropes, like the girl who's awful at cooking, and unexciting NPCs, such as the shopkeeper who can't stop lying to move product at her store. This isn't outside the norm for Atelier, but this entry is particularly weak. The best interactions come between Escha & Logy, who must work together, despite Logy's seriousness and Escha's contrasting lightheartedness. Still, I wasn't enamored with either one, and as leading protagonists that's troublesome. As for the story, even the lands' biggest "secrets" don't provide a stimulating tale. I found myself bored by dialogue and not caring much about this world or its heroes.

Despite its shortcomings, I still enjoyed Escha & Logy. The alchemy and battle systems continue to get more complex and impressive, making it easy to get lost in them. The urge to make one more item or explore more of the world for new materials or to best a boss rarely dims. Escha & Logy may have some flaws, but it's good at providing a formulaic experience that rewards you with seeing your progression play out before you. 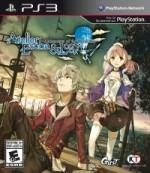 The latest Atelier entry is out today.  Did Gust concoct the best entry yet?

Purchase More Info
7.75
i
Game Informer's Review System
Concept Become a government official helping a small city with alchemy and discovering the world’s larger secrets
Graphics The cel-shaded character models look better than ever. Environments need some work, but at least Gust is improving the variety
Sound The voices fit the characters, but some personalities like the Cowboy are grating. Overused musical tracks wear out their welcome
Playability The alchemy and battle systems have enough depth for veterans, but aren’t overly complicated
Entertainment Making everything you need to succeed is as fun as ever, thanks to the deep alchemy system and a good learning curve
Replay Moderate