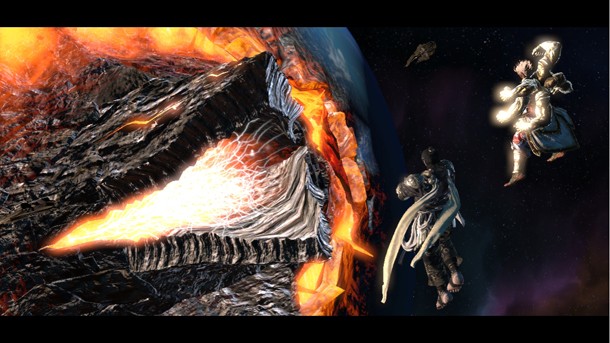 Asura isn’t happy. The demigod has been cast out of the heavens after being framed for a treasonous murder. To make this betrayal even more personal, his wife has been slain and their daughter kidnapped and exploited for her own unique powers. Rather than simply brood about it, Asura taps into his feral nature and punishes his former comrades in an epically scaled tale of revenge.

Asura’s former friends comprise a unique vision of a godly pantheon, marrying elements of extreme technology and Eastern mythology into something fresh. Each of the seven demigods fills an archetype – mentor, mastermind, beauty-obsessed sadist, etc. – with Asura’s primary attribute being his short fuse. Seeing how mortals are being exploited by the demigods only serves as another motivator for him to pound them into oblivion.

The combat may not be as deep as other hack and slash offerings, but it does a great job of making Asura feel (and play) like the unhinged demigod that he is at the expense of a degree of finesse. It sells the concept of Asura as a powerhouse who uses his strength like a maul rather than a scalpel, but players who like methodically dismantling enemies with juggles, cancels, and other technical flourishes may be left cold by the mash-heavy engagements.

Whether it was a conscious decision on CyberConnect2’s part or not, the bulk of enemies simply don’t put up much of a fight, either. Instead, combat sequences are framed around building Asura’s burst gauge. Once it’s filled through pummeling enemies and performing well in QTEs, players can unleash Asura’s full fury with a quick press of the right trigger. That’s basically the “end combat sequence” trigger; until you activate that burst mode, the majority of battles will continue indefinitely, with enemies respawning on a loop or simply refusing to die. When it’s activated, you’re treated to a reliably impressive sequence of Asura giving someone the business in a comically over-the-top beatdown.

Over the top is as mundane as it gets in Asura’s Wrath. This is a game where your character sprouts (and loses) additional pairs of arms without anyone giving it a second thought. You will get impaled with a weapon that is longer than the diameter of Earth. Heck, before the credits roll, you will literally punch a planet right in its face. While I was expecting these kinds of ridiculous moments from the game, I was surprised to see that it wasn’t just a revolving freakshow-like series of big moments. Instead, Asura’s Wrath is grounded by one of the more interesting stories I’ve seen in a game, focusing on human suffering and how even the noblest of intentions can be corrupted.

Asura’s Wrath isn’t as brainless as it may want you to believe. The ridiculous moments and likable characters kept me smiling, which was odd, considering it’s essentially a story about misery. It’s a nice change of pace from other hack-and-slash games, featuring an interesting story that’s not blocked off by insurmountable difficulty.

8.5
About Game Informer's review system
Concept
Extract revenge from your former demigod comrades using your six arms and an endless supply of rage
Graphics
Characters are drawn with a striking woodcut effect, and they look great even as the game’s scale explodes into the stratosphere
Sound
Asura seethes with the best of ‘em, and a varied musical score nimbly keeps pace
Playability
Combat is relatively simple, but satisfying. Rail-shooter segments break up the action
Entertainment
Asura’s Wrath offers a unique world and characters, plus plenty of bombastic combat to keep things moving briskly
Replay
Moderate