Keeping The Faith By Questioning It
by Suriel Vazquez on Oct 26, 2017 at 06:00 AM
Publisher: Ubisoft
Developer: Ubisoft Montreal
Release: October 27, 2017
Rating: Mature
Reviewed on: Xbox One
Also on: PlayStation 4, PC Though Assassin’s Creed has experimented with tower defense, grappling hooks, and naval combat over the years, it isn’t always quick to evolve. Changes to mission design, combat, and exploration are staggered across separate entries, which dulls the impact of any one change. With an extra year of development to question what makes the franchise great, Assassin’s Creed Origins implements sweeping changes in every department, reworking or cutting worn-out features and building new ones in their place. These changes come with some growing pains, but result in one of the largest, most open-ended entries in the series.

Origins chronicles the foundation of the Assassins and their conflict with the Templars (called the Order of the Ancients) in Ptolemic-era Egypt. You take the role of Bayek, a military scout hunting down members of the Order who’ve killed his son. Bayek is a strong lead who sits at a comfortable midpoint between the playfulness of Ezio and the brooding over-seriousness of Connor. The supporting cast is great as well, and several moments build on his relationships with his community, family, and friends across Egypt in ways that flesh out his character.  Bayek’s wife, Aya, steals every scene she’s in, and the story explores their relationship in ways that made me miss her when she and Bayek are apart.

While the heroes stand out, the villains tend to bleed into one another a little too quickly. Major targets feel like stepping stones rather than enemies you can take true pride in killing. Assassinating them is still satisfying, but only because the hunt itself is usually fun, not because Bayek’s hatred for them comes across through the storytelling. A couple of major targets, like the Scarab and the Hyena, provide some great moments as they chew scenery, complicate their roles as villains, and provide context for why they joined the Order, but their arcs go by too quickly, and they're quickly supplanted by new targets. Bayek has more freedom than his descendants when it comes time hunt someone down. Bayek has no need to closely follow or eavesdrop on his targets, and so those stock mission types are gone. In their place are open-ended goals which involve rescuing, looting, or killing in whatever ways you can manage. Infiltrating a fortress at night, I was able to wipe out most of its guards in their sleep. Another group of guards kept a captive lion, which made unleashing it by firing an arrow at its cage fitting revenge. I loved that I never had to worry about failing a mission unless I died in combat, which also made me more likely to experiment with the different tools at my disposal.

The expanded freedom can lead to some anticlimactic moments, however. One mission required I steal a horse from an enemy camp, and I was able to simply ride into it without paying attention to the guards, mount the horse, and gallop my way back out without having to fight anyone. Mission objectives also repeat too often, and while the act of sneaking into a fortress never completely loses its appeal, having to escort or carry a target out of a camp is less gratifying after doing it several times.

Combat has been reworked for the better. Dodging, blocking, and hitting opponents feels more active than the counter-based approach of past games. The basics are simple (break enemy shield stances with a heavy attack, dodge unblockable ones) and not quite as sharp as you might find in dedicated action games, but I enjoyed fighting enemies as a change of pace from sneaking around. Being seen doesn’t mean having an entire battalion descend upon you as long as you can take out the offending guard quickly, which helps even the balance between sneaking and fighting. As you explore Egypt and pick up missions, raid encampments, and gather resources you'll earn XP, which makes you stronger and grants access to new abilities and weapons. Although most of the loot you find comes down to a small variety of swords, spears, scepters, and heavy weapons, these archetypes are all fun to learn, and I received stronger gear often enough to experiment regularly. Rare gear layers on special attributes like healing you with every attack, or lighting everything it strikes on fire – which can mean Bayek himself if you’re not careful.

The skill tree offers a number a ways to grow your character by either improving on improving your current toolset or giving you new toys to play with. On the practical side, the ability to switch between two weapons lets you adapt to different combat scenarios, and assassinating two targets sequentially makes stealth intrusions smoother. However, being able to tame wild animals and sic them on anyone who got in my way made for some fun moments of chaos.

The leveling system gives you goals to chase, but also comes with restrictions. Higher-level missions and enemies are frustrating to fight, so you may need to level up between missions. This especially slows the pace down as the main story builds momentum in its final hours. Areas are also cordoned off by level, which means your path through the world isn’t as open as its size leads you to believe. You can speed up the leveling and upgrade curve by paying real money, but I never felt strained for resources or wanting for new weapons. For players wary of microtransactions, I can’t say the implementation in Origins improves the experience, but it isn’t intrusive.

Climbing vantage points reveals various activities on the map, but Origins scales back the number of icons onscreen while giving you a much larger area to explore. Egypt is massive, and a joy to explore. It features a variety of beautiful sandswept deserts, jagged cliffsides, tranquil oases, and forested swamps, along with the cityscapes like Alexandria. Most secrets are marked as a question marks on the map, and lead to substantive activities like raiding tombs (which involves a good mix of exploration and light puzzle-solving) or finding stone circles (which unlock meaningful flashback conversations between Bayek and his son). This gives scouring the map a sense of discovery that, along with the beautiful landscapes, made me more eager to explore the world.

As much as Origins improves the world inside the Animus, it struggles to provide a meaningful reason to venture outside of it. After several installments of pushing the present-day storyline into the background, Origins attempts to bring it back – or wants you to think it does. Although you control a character who can move around a small area (much like Desmond in earlier games), the present-day plotline isn’t significant enough to be given this thorough a treatment. It tells as short, self-contained personal story with a couple of minor revelations about the Animus, but doesn’t offer insight into the present-day world or make me rethink past events. By the time I had finished this story, I wondered why I had been kicked out of the Animus at all.

Origins doesn’t completely rebuild Assassin’s Creed, but makes a number of smart, significant changes to a formula that, despite yearly updates, was showing its age. The increased freedom in how you approach targets, the more active combat, and alluring world not only make exploring Egypt a rewarding experience, but also offer a strong direction for the series going forward while still remembering what made it unique in the first place.

This review pertains to the Xbox One version of the game, running on an Xbox One X. The game is also available on PS4 and PC. 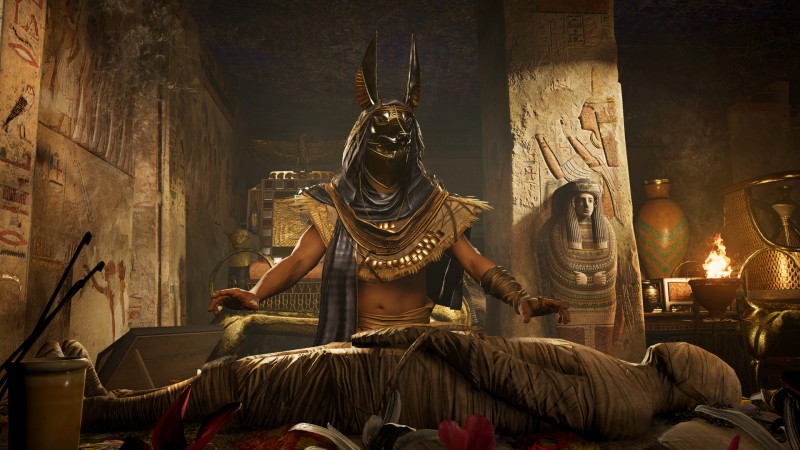 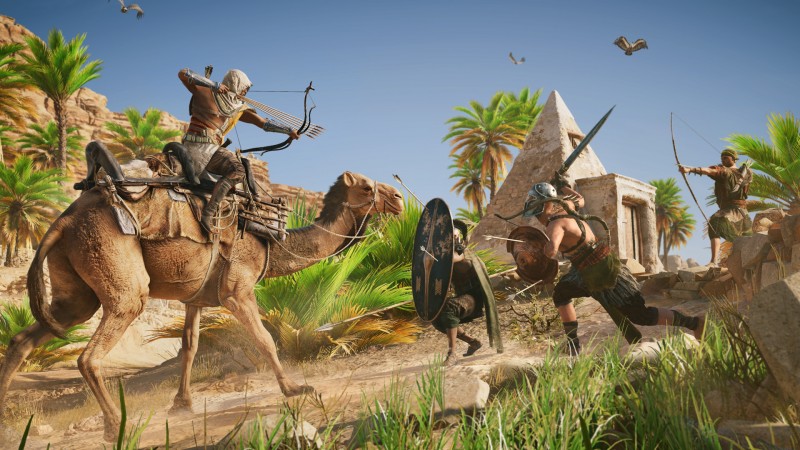 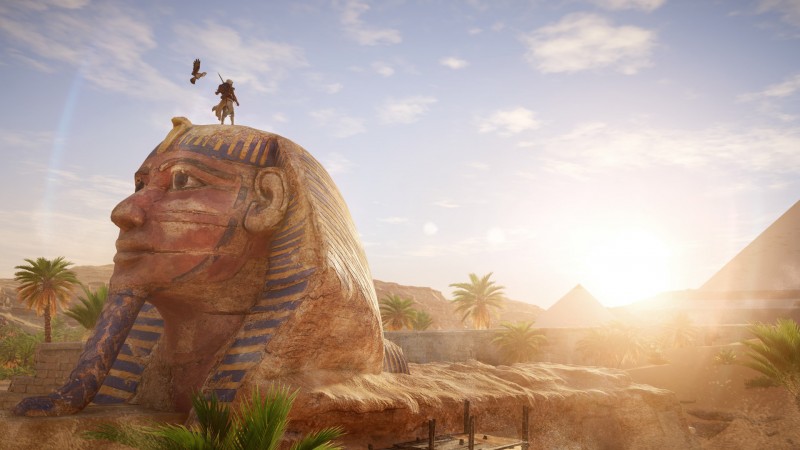 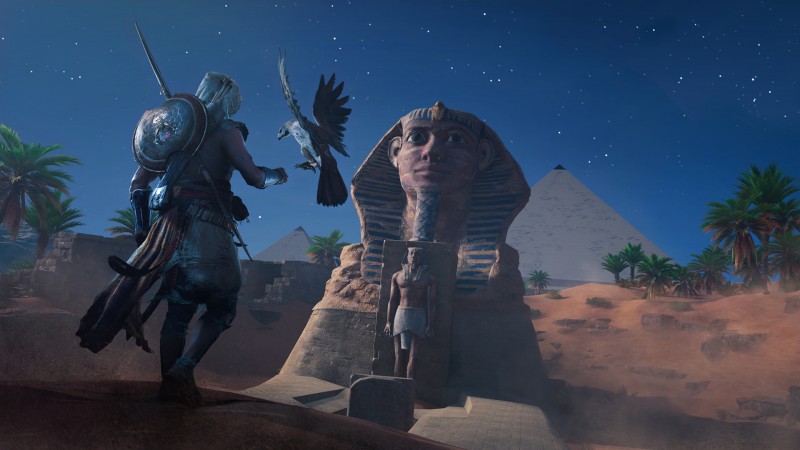 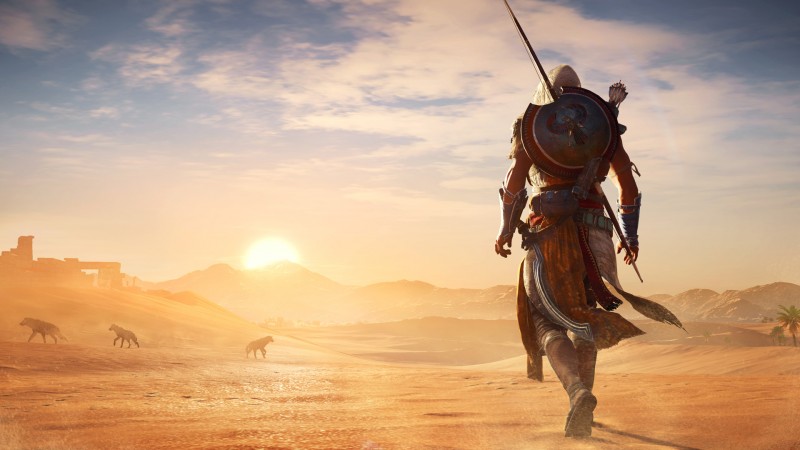 Assassin's Creed finds new life by questioning nearly every tenet of its design.

Purchase More Info
8.5
i
Game Informer's Review System
Concept Revamp the most outdated aspects of Assassin’s Creed while introducing the series’ most sprawling, beautiful locale yet
Graphics Egypt’s deserts, canyons, and oasis towns look -gorgeous. Some framerate slowdowns occur during cutscenes, however, as well as a few hitches lasting for as long as three seconds
Sound The sound design is as sharp as ever, from the sword clangs of combat to the bustling cities
Playability Combat and stealth see some welcome improvements, and the larger world serves the series’ sense of exploration well
Entertainment Expanded progression, open-world freedom, and a fascinating backdrop make for an enticing origin story
Replay Moderate