Assassin’s Creed II shatters expectations. It’s bigger, more complex, better looking, and more fun to play than its predecessor. That first game set the bar for innovation in action games, establishing a unique control mechanic, a nuanced and clever approach to plot development, and an overriding concept unlike anything in the gaming milieu. In many ways, the sequel is far less innovative. Ubisoft Montreal improved all of the standout features, but it didn’t push the envelope. Instead, the team used this go-around to fix problems, perfect their strengths, and, perhaps most importantly, model some of the tent-pole ideas of other games. The pacing of open world crime games, the upgrading mechanics of a great RPG, the reward-based hidden items and unlockables of an exploration game, the puzzle elements of a classic adventure game – they all merge flawlessly in Assassin’s Creed II.

Ezio’s adventure builds on the journeys of his predecessor, Altaïr. The repetitious missions that marred the first entry are replaced by a seamless flow of story events punctuated by a plethora of side missions players can tackle at their leisure. Structurally, the main plotline is more linear, but players might not notice as they move between varied activities. Hundreds of collectible items are scattered throughout the Italian Renaissance cities. Every one of these pick-ups either increases your wealth or ties directly into developing the story. Half a dozen fantastic platforming levels hidden throughout the game world are the best palette cleansers; these brief stages are a blast, and lead to one of the game’s most desirable unlockables. A short puzzle game is implemented for those who want to embrace the conspiracy theory angle of the Assassin’s Creed Lore – the less spoiled about this intriguing plot the better.

World navigation, exploration, and free-running remain the highlights of the game experience. The puppeteering control model has been tweaked to be more intuitive, which makes running across the rooftops of Venice and Florence an amazing experience. It certainly doesn’t hurt that the backdrop is one of the most architecturally significant and breathtaking locations in the world. Ubisoft Montreal has done a stellar job of capturing the mystique of these fabled cities.

By adding an economic system into the mix, the game employs a role-playing approach to upgrades and character development. Weapons, armor, medicine, clothing color, and even an extensive collection of actual Renaissance art are all available for purchase. The game also offers players the chance to simulate an entire town’s construction over the course of the decades-long storyline. The rebuilding of Ezio’s villa becomes an extension of his character development, and also provides some major monetary gains.

The story also feeds off Altaïr’s adventure, rewarding devoted players who know the fiction well while at the same time presenting infromation in ways that allow new players to pick up the thread. The wider plotline hinted at in the first installment is torn open this time around, revealing an interconnected storyline that stretches across history – one that is so well told and integrated into the true events of the past that there are times that it is hard not to believe the beautifully wrought lie. Ezio Auditore is a brash new protagonist – part Casanova, part ninja, and part Michael Corleone. He looks dangerously cool and his personal development into a master assassin across the game is believable and engaging. Like many open-world games, the story has the potential to feel fragmented as you play a mission and then do something else; this disconnection is exacerbated by the vast spread of time over which the game unfolds. Transitions between major sections sometimes feel abrupt, but it’s the worst that can be said about an otherwise engaging narrative.

As the franchise moves forward with a brand-new historical hero, the futuristic tale of Desmond steps up in intensity. Though there are fewer sequences in the near-future world of Abstergo and the Animus, the sequences that occur are more meaningful and give exciting insights into what lies ahead for the franchise.

Combat features strong new additions like disarming techniques and an expanded array of weapons. Countering and special kills remain a blast, and the new techniques and weapons make defensive fighting more enjoyable than ever. However, enemy AI is often questionable; guards will stand and stare without attacking for too long or ignore you completely when they’re fighting your allies. In addition, I’d love to see a more engaging way to handle attacks initiated by the player. Most enemies auto-block any frontal assaults, so it’s hard to bust out into a flurry of motion to take them down. The combat is still thrilling, but it needs some work to stand toe-to-toe with the best action games.

Stepping back from the many disparate elements of the game, the picture that emerges is impressive. Assassin’s Creed II is a complex, mature, and engaging journey from beginning to end. It stands as a benchmark for design that combines innovative ideas with tried-and-true techniques to create one of the great games of this generation. 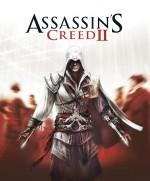