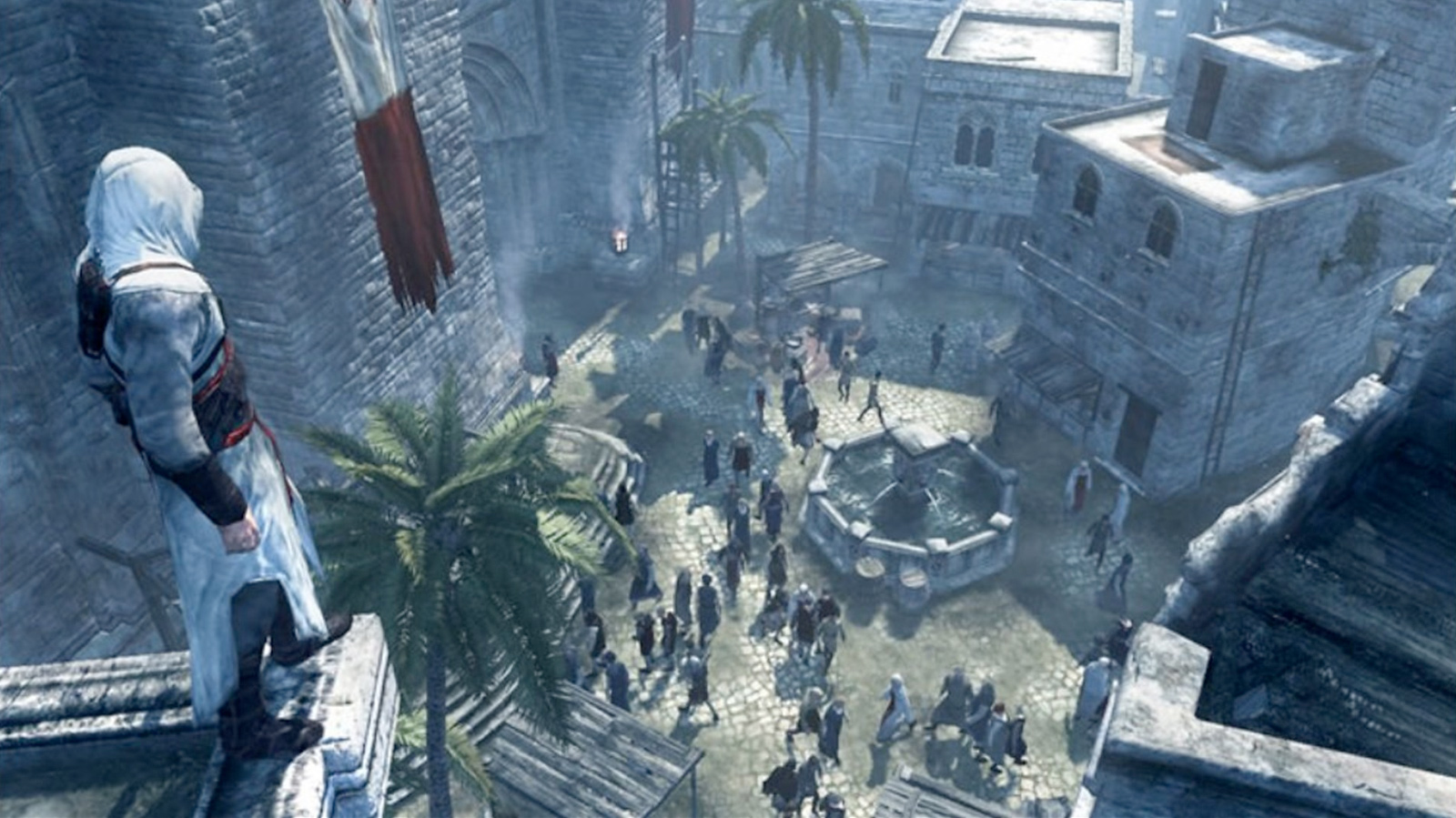 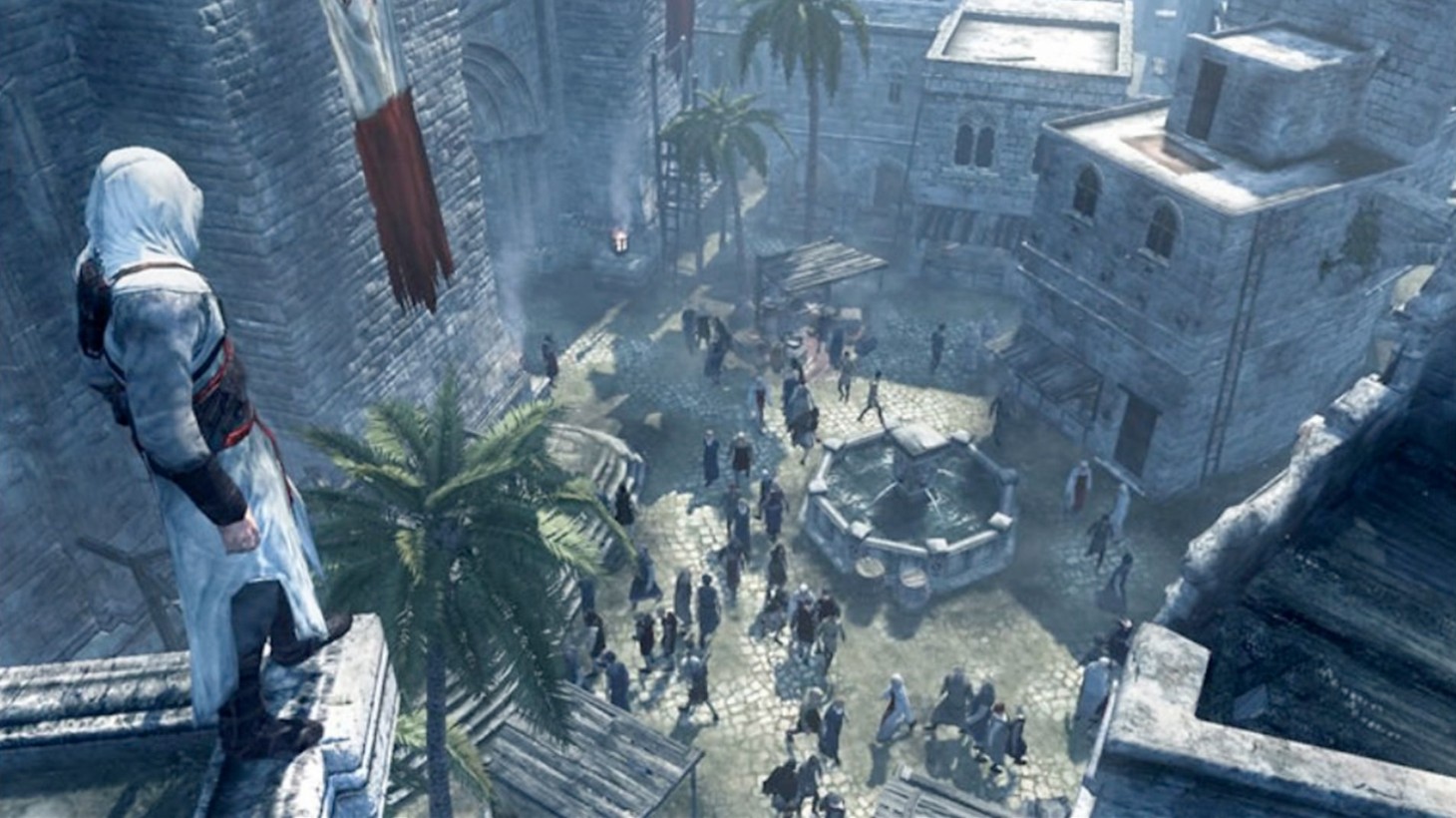 Assassin's Creed is the type of game that comes along only rarely -- a title that innovates in so many areas it helps to set a new bar in various aspects of gameplay, storytelling, visuals, and controls. Simultaneously, it's an imperfect game in which the small flaws that mar its sheen are all the more noticeable because so much of the rest of the game shines so brightly. Deep, engaging, and surprising from beginning to end, Assassin's Creed's merits will be debated for a long time. However, as a brave attempt at delivering something unique and audacious, it excels.

The surprises start right off the bat, when you power on the game and spend several minutes second-guessing if they put the right disc in your case. Many of you will have already heard about this opening twist, but if not, I won't be the one to ruin it for you. Suffice to say, the context in which you find yourself a medieval assassin is more complex than it appears.

Once the real action gets going, you'll wander a huge open world -- three massive cities and the connecting countryside. It's a strange mix of meticulous historical recreation and totally open level design. Climbing and leaping can get you to almost any place in the world usually by any number of different paths. Hero Altair is as much ninja as medieval warrior as he goes about the grim business of hunting down evil men who are oppressing the people of the Holy Land. Rarely has a character without superpowers or magic been quite so powerful and exciting to vicariously inhabit, whether he's perching on a high tower of the Acre Cathedral or countering the blows of a Templar knight.

With its intuitive puppeteering button scheme, there's a fundamental shift in play control at work. Where most games are primarily concerned with the question ''Where do you want to go?'', Assassin's Creed puts equal weight on ''How do you want to get there?''. By designating all actions as high or low profile, movement becomes less about individual button presses and more about situational observation. Further, each face button is like a part of the body that changes contextually to match the situation. In a fight, your open hand button might grab a foe, but when running along rooftops the same button will reach for a distant ledge. While seemingly a minor variation on a familiar theme, this approach to control is one of the game's greatest triumphs.

Through a long and complex narrative, you'll repeatedly play through what might be loosely called levels. This gameplay arc is split into several components. The first involves the journey to and exploration of a location, followed by an investigation of the target. With the knowledge gleaned, you'll finally make the hazardous approach to your well-protected victim to complete the murderous deed, before sprinting away to safety. While this design is a lot of fun, it eventually feels mildly repetitive -- particularly the investigations. More variety in these activities would have been welcome.

When you're ready for a break from the story, a huge number of collectibles are scattered through the game -- over 400 hard-to-find pick-ups and 60 secondary assassinations. It's a great addition only marred by the fact that none of these collectibles ever yield any genuine reward beyond Gamer Points and Achievements.

If only to experience the unique world and amazing movement and combat, gamers owe it to themselves to try Ubisoft's big holiday release. Its stunning visual style, high concept story, and wildly open level design are like nothing else, even if too much repetition begins to frustrate in the later hours. It's a game people will still be talking about five years from now. Come to think of it, they may have a lot more to talk about by then.

9.5
About Game Informer's review system
Concept
Journey across the medieval Holy Land as a death-dealing assassin in one of the most innovative game releases in recent years
Graphics
Remarkable visuals transport you to the past and immerse you in the action
Sound
From music to voice work to ambient sound effects, the aural component only deepens the involvement
Playability
An entirely new approach to controls is a tremendous success -- as intuitive as it is functional
Entertainment
A lengthy game with lots of surprises. Too much repetition is the only flaw in what is otherwise a must-play experience
Replay
High 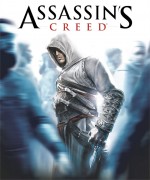