Long before From Software was torturing gamers with Demon's Souls and Dark Souls, the Japanese developer was keeping mech fans busy with a steady stream of Armored Core titles. Armored Core V is the newest installment of the series, and while From Software has continued its tradition of melding online and offline play in unique ways, the mech-exploding action has a few glaring issues.

While AC V offers a functional offline mode, playing it that way would be like going solo in an MMO. Apart from a short gameplay tutorial, your first task is to sign up with an online team or create a new one. Each team accommodates up to 20 players, and everything you do in the game – from playing through story missions to competing for territory in Conquest battles – earns your squad Team Points to unlock new missions. The world map displays which teams control the dozens of territories and functions as a chatroom for your team. From Software has added systems for trading parts, money, and mechs with your fellow members. These aspects instill an impressive sense of camaraderie with your team, and my attempts to play offline were significantly less fun.

Mech games are known for their customization options, and AC V is no different. In addition to a staggering number of weapons, the mechs (called ACs) can be customized with a variety of armors, boosters, and other items. Customization isn't just a matter of simple stat changes either; different loadouts have a massive impact on handling, and accommodate a variety of play styles. Unfortunately, the UI is a complete pain. The simple act of equipping a new weapon is surprisingly confusing, and the game offers little explanation. Even after you figure out how to build your mech, shopping, assembly, and testing are all handled in different menus, making customization a cumbersome and time-consuming affair. The amount of prep time required is made worse by the missions. Missions are divided between story chapters and orders, both of which allow you to bring a friend along. The story missions, which are the longest missions in the game, are a confusing mess of disembodied dialogue and unexplained objectives. Difficulty also quickly becomes an issue, since even the most agile mechs can't dodge the unavoidable barrage of missiles, bullets, and plasma blasts you'll soon be facing. This leads to a frustrating game of trial and error, requiring you to restart from the last checkpoint, change up your loadouts, then fight your way back to the problem area. To make matters worse, you can't buy new parts during missions, so if you don't already own the right equipment to get you through a tough encounter, be ready to start the mission over from the beginning.

Order missions fall on the other side of the spectrum. Devoid of any story elements, order missions are all about making money and earning Team Points. They're also so short that you spend more time setting up your AC than on the battlefield. I engaged in numerous one-on-one AC battles that were over in less than a minute, while the longer search and destroy order missions took around five. The variety in order missions is far too limited, and I quickly grew tired of having to complete them for points and money. The most interesting mode is Conquest, where you battle other teams for territory control on the world map. Capture missions require you to gamble your Team Points, and allow you to bring three teammates with you into battle (a fifth player can assume the role of operator, who watches combat unfold from an overhead map, marking important tactical areas on the other players' HUD). Since most teams won't be online 24/7 to defend their territory, most invasion squads will go up against a team of NPCs, plus whatever defensive turrets the team has bought for the map.

The main problem with this is that the level of the NPCs is chosen randomly, meaning you might get teamed up against a pack of pushovers, or the mech equivalent of the A-Team. If the defending team is defeated, they simply lose their territory, and can try to gain it back later. However, if the invading team goes down, they lose all of their Team Points, and will have to grind their way back to the top by replaying countless story and order missions. It's a harsh penalty for not knowing what grouping of enemies you'll be up against.

I appreciate the interesting format AC V employs, and enjoyed the sense of camaraderie I had for my team. However, the story missions are too confusing and difficult, the order missions are too short and repetitive, and there is no in-between. I think I spent more time customizing my mech than I did fighting in it, and the solid multiplayer support can't make up for the lack of variety. A dedicated team can make the experience worthwhile, but you should play AC V under those conditions or not at all. 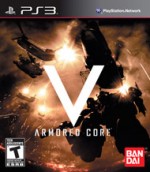 There's a new installment in the Armored Core series, and while From Software has continued its tradition of melding online and offline play in unique ways, the mech-exploding action has a few glaring issues.


Purchase More Info
6.5
i
Game Informer's Review System
Concept Create a fast-paced mech game that blurs the line between single-player and multiplayer
Graphics Big battlefields and an abundance of explosions don't make up for the humdrum visuals
Sound The melodramatic soundtrack is largely enjoyable, but the dialogue is laughable
Playability The controls are responsive without diminishing the feeling that you're piloting a multi-ton mechanical behemoth
Entertainment I appreciate Armored Core V's focus on dedicated teamwork, but a lack of mission variety brings down the experience
Replay Moderate