Antichamber has been racking up awards at indie game conferences since 2009, and stumbling my way through the game made it easy to see why. This indie puzzler establishes creator Alexander Bruce as the M.C. Escher of game development, providing players with a sprawling and satisfying network of challenges that require novel thinking to overcome.

Like Portal, Antichamber's puzzles exist in an environment where the laws of nature don't apply, allowing players to think in ways that reality doesn't require. Whereas Portal "only" bent the rules of space, Antichamber throws everything you know out the window, stripping you of your preconceptions before building you back up with a new set of skills and rules to play by. An early puzzle teaches me the importance of not taking anything for granted. After walking down an L-shaped corridor, my path diverges into two choices: a blue staircase that leads upwards and a red staircase that leads downwards. I choose the blue stairs, which lead me up to another L-shaped hallway. When I turn the corner, I'm confronted by the same two staircases. I spend the next few minutes alternating between the two paths, but no matter which one I choose, it leads me back to the same stairways. Confused, I begin walking towards them again, then pause in a moment of clarity. I turn and walk back the way I came, peering around the corner. Lo and behold, it now leads to a new area.

Each time you solve a puzzle in Antichamber, you come across a plaque with a saying that sums up the lesson you've just learned, many of which have real-world value as well. These lessons are the core of Antichamber, and it teaches you everything you need to know with virtually no on-screen instructions. Instead, you learn from your failures, and every time you expose a trick the world has played on you, your knowledge base grows a little. There's no hint system in Antichamber, so if you get stuck on a puzzle, you have two choices: bang your head against the wall until you figure it, out or tackle one of the other branching paths that make up the ambiguous laboratory/compound you're trapped in. Thankfully, you can exit to the map room at any time (once you figure it out, anyway) and fast travel to the puzzles you've discovered. You do this a lot. Sometimes your progress is hindered by a tool you've yet to acquire. Sometimes you botch a puzzle and need to reset it. Sometimes a path simply leads to a dead end. Despite these pitfalls and abstract puzzles, I rarely ever felt stuck or frustrated by a lack of progress – a testament to Antichamber's pacing and design.

The gameplay evolves when you discover a gun that allows you to collect and place cubes in the world, providing you with the literal building blocks you need to overcome challenges. You upgrade the gun several times, building on your abilities and the complexity of the puzzles you're confronted with. The upgrades also make redoing many of the earlier puzzles a breeze, easing the pain of backtracking through environments while searching for missed secrets and abandoned puzzles.

Below: Watch our Test Chamber video.

It wasn't until the very end that tedium began to set in, as I tried to hunt down the last few paths I had missed. That boredom was erased as soon as I entered the multi-roomed gauntlet of puzzles standing between me and Antichamber's enigmatic ending, a final test of the lessons I had learned. Regardless of the lack of story, overcoming those challenges filled me with a greater sense of achievement than the countless "save the world" missions I'm used to taking on in video games. Gamers would be hard pressed to find a more unique, engaging puzzle game.

9
About Game Informer's review system
Concept
Create a surreal first-person puzzle game that surprises you at every turn with nontraditional brain teasers
Graphics
The rudimentary visuals are hard on the eyes, but necessary for Antichamber's spatial illusions
Sound
The music provides a great ambient soundtrack to the puzzles and environments
Playability
The jumping mechanics are a bit touchy, but everything else controls fine
Entertainment
From beginning to end, I was amazed by the breadth, variety, and creativity of Antichamber's puzzles
Replay
Moderate 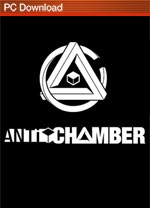