Nintendo’s Animal Crossing is a polarizing series. Little middle ground exists between those who are reeled in by its laid-back charm and those who simply can’t wrap their heads around its appeal. New Leaf will do absolutely nothing to sway those that don’t want to spend days, weeks, or months talking to animals and shaking trees, but it retains the series’ trademark charm that makes even seemingly mundane tasks worth your time.

Playing this game for 15 or 20 minutes a day is still the way to go, since you don’t have enough to do on a daily basis to facilitate long play sessions. On most days, your experience revolves around collecting and selling fruit, hitting rocks with your shovel in an attempt to find the day’s magic money-spewing rock, digging up fossils, and chatting up your town’s various inhabitants. It’s far from a high-octane gaming experience, but I had a smile on my face during most of the time I spent in my town.

None of these elements are new to the series’ 3DS debut, but it’s still a leisurely good time to go through the motions. Where New Leaf separates itself from its predecessors is your role in the town. From the moment you step off the train, you assume the role of mayor. I enjoyed having some say in my town’s structure, as previous games mostly confined you to house customization (which is still very much a part of New Leaf). As someone who typically plays late at night, I loved being able to set a “night owl” ordinance for my town that made stores stay open later. I also had fun raising money for public works projects like a cobblestone bridge, a campsite, and an additional floor for the museum. Your duties as mayor don’t fundamentally change the way you experience the game, but do provide a nice change of pace.

One of my favorite new additions is the integration of 3DS play coins in the economy. Standard items like shovels, fishing rods, and furniture are still bought with the standard currency, but play coins are used to purchase fortune cookies. These cookies frequently contain a “lucky ticket,” which can be redeemed for special Nintendo-themed items. I dedicated the main floor of my house to these prizes; it’s adorned with the Triforce, a go-kart, spinning red shells, Captain Olimar’s ship from Pikmin, and much more. In addition to furniture, I also scored Nintendo clothing such as a Samus helmet, a Pikmin hood, Link’s tunic, and Majora’s Mask.

Even after spending almost 30 hours with the game, I was frequently rewarded with new events. I got excited every time some new character came to town and mentioned that he was considering building a new attraction in my shopping district. A new club or coffee shop doesn’t change the game, but it’s always nice to add another location or activity to a game that features so many.

Visiting a fellow player’s town is fun, though most of the enjoyment still comes from checking out their houses, meeting their neighbors, and planting new fruit trees. I loved texting real-life friends to request them to open their town gate so that I could accomplish some of the game’s sillier requests; at one point, I travelled to a co-worker’s town so that I could collect signatures on a petition that encouraged my town’s residents to wear hats more often. Players can also travel to a minigame-filled island together, but these basic distractions are low on interactivity and fun.

Detractors of the series may dwell on its lack of defined goals and gameplay, but they’re missing the point of what makes Animal Crossing great. New Leaf is one of the most purely pleasant experiences in gaming, free of stressful boss fights, combative multiplayer experiences, or cynicism in any form. Instead, it focuses on clever humor and forming friendships with the residents of your town. Some may find it cheesy or without direction, but I enjoyed this endlessly charming outlier in the current gaming landscape. 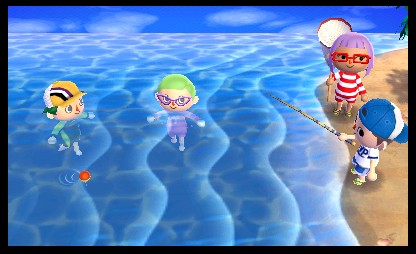 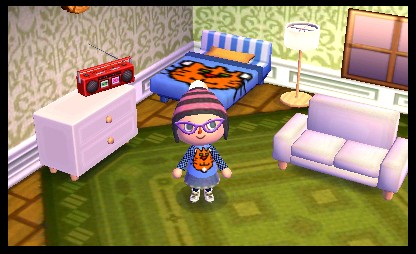 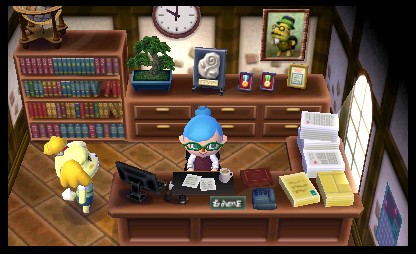 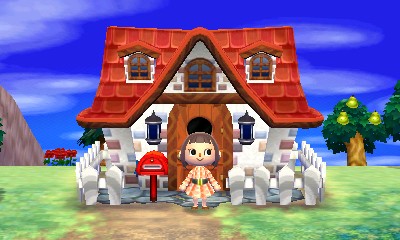 8.5
About Game Informer's review system
Concept
Live a day-to-day life in a drama-free, animal-filled town
Graphics
Sharper than the visuals of City Folk, but it retains the same basic art style
Sound
Between K.K. Slider’s quirky tunes at the club and the relaxing music of the town, the soundtrack is memorable and fitting
Playability
D-pad shortcuts eliminate some hassle, and bunching similar fruits together saves inventory space
Entertainment
I was in a good mood every time I played New Leaf, and I’ll be spending many more months improving my town
Replay
High