The Muppets may be a better license to bear the Angry Birds name – both properties prominently feature pigs in space – but Rovio has done a tremendous job making Star Wars feel like it belongs in the birds’ universe. The strengths of both brands are exercised in clever ways, making Angry Birds Star Wars a must-play game for Jedi and bird-hurlers alike.

Gravity remains the weapon of choice to crush the evil Pig Empire, but the birds can also tap into the Force to magically move objects, swing lightsabers to cut through debris, and volley laser fire to take out multiple pigs at once. These new mechanics fit nicely with the series’ well-established slingshot gameplay, and are tapped to create a variety of strategy-intensive levels that are among the most challenging and rewarding I've seen in an Angry Birds game.

When the new mechanics are used as the primary puzzle-solving method for a level, don't be surprised if you have to experiment a handful of times to figure out how to slay all of the pigs. In some levels I had to Force push in the opposite direction of my bird's trajectory to cause two points of destruction at the same time. Other stages pushed me to ricochet laser fire off of metal surfaces, deflect shots with perfectly timed lightsaber swings, and sling birds into timed laser blasts to vary their flight just enough to hit a TNT box. The majority of the levels are excellently crafted, often making the collapsible constructs look like vehicles or scenes from the Star Wars films.

The biggest surprise in Angry Birds Star Wars is its faithfulness to Star Wars’ story. The game follows A New Hope’s arc surprisingly well. When Luke Skywalker is introduced, he’s just a farm bird who can’t do much of anything other than ram his face into solid objects. After a few levels are completed, he runs into Obi-Wan Kenobi, who gifts him with a lightsaber he can use in subsequent levels. Han Solo’s bird is added after Luke and Obi-Wan travel to the cantina. Luke even dons his X-Wing gear when the Rebel Alliance attacks the Death "Pig" Star. The only disappointing aspect of the story: Greedo doesn’t fire a shot at all. That’s even worse than George Lucas’ alteration to the Special Edition.

A New Hope’s story is broken up into 80 levels. Golden Eggs earned along the way unlock challenging bonus levels featuring C-3PO and R2-D2 as playable birds. C-3PO explodes into a handful of pieces – a nod to the Ugnaught dismantling on Bespin – and R2-D2 uses his electrical shock ability. These stages are the hardest I’ve seen in an Angry Birds game, and most are based on Angry Birds Space’s orbital level designs.

The Empire Strikes Back and Return of the Jedi are also featured to a lesser degree. Empire is represented with Hoth, which will be a free update at a later date, and Return of the Jedi takes players to Dagobah. The catch: You can only play one Dagobah level in the base game. You’ll have to fork out another $1.99 to get the other 39 stages. These levels repeat many of the strategies used in the core game, but do have some interesting puzzles tied to Force-levitated objects generated by the spirit of Darth Vader.

I’ve played through all of the Angry Birds games, and had the most fun with this Star Wars-themed version. And that’s not just because it’s Star Wars. This game shows Rovio is at the top of its game, using a beloved license to deliver the series’ most creative levels to date.

8.5
About Game Informer's review system
Concept
Rovio's flock of destruction travels to a galaxy far, far away where the best level designs of the series can be found
Graphics
Colorful as always, and heightened by structures created in the image of iconic Star Wars sights
Sound
The Star Wars score mixes surprisingly well with Angry Birds'. The birds are also equipped with hilarious Star Wars voices
Playability
Star Wars elements are used to make a more dynamic gameplay experience
Entertainment
Yes, it's more Angry Birds, but it's also the best entry in the series
Replay
Moderate 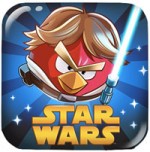