Amy is the story of a woman named Lana and the little girl she rescues from a mysterious research facility, and the fallout from a horrific outbreak. It’s also a cautionary tale of how poor game design can murder fun, and how easily the truly desperate can be separated from $10.

Expect a typical survival-horror scenario with spooky tunnels, moaning creeps, and easily broken melee items. The twist comes with 8-year-old Amy. When broken down to her key functionality, Amy is a pretty handy item to have around. She fetches stuff, casts a variety of psychic spell things, and flips a mean switch. Unfortunately, Amy is also a tremendous annoyance.

Amy follows simple commands such as “come,” “stay,” and “pick up those syringes.” She also has an immunity to the outbreak that’s plaguing Silver City, which comes in handy. Stray too far from Amy, and Lana will rapidly become infected. When she does have to leave the little girl behind (crates don’t push themselves, after all), Lana can mitigate the effects by jamming a needle into her neck. As her condition worsens, her gait changes to a limp, her vision takes on a red tinge, and she hears creepy whispers. In the final stages of the infection, Lana can amble past the hostiles without fear of being attacked – a boon considering how awful she is at staying alive. Without any accurate way for players to gauge her condition, however, the bigger danger is that she’ll simply fall down without warning and die.

When this happens – and it will – you’ll have to start over at the last checkpoint. This usually means that about 10 minutes of preparation is instantly gone and will have to be repeated. There’s not much tension to be had in the game to begin with, and it’s completely drained when you’re forced to do the same menial tasks over and over again to try to determine where exactly a plan fell apart.

This is exacerbated in later levels, when simply being spotted by an enemy automatically means failure. Here’s a sample sequence: Push a crate. Hit a guy in the back of the head with a crowbar, breaking the weapon in the process. Leave Amy. Wait 40 seconds to get contaminated enough to walk past a pair of infected. Push two more crates. Get Amy. Walk past infected. Shove Amy into a concrete pipe. Wait 40 seconds to get contaminated. Push a car. Rejoin Amy. Watch as Amy decides to walk over broken glass, alerting everyone in Silver City. Restart. Even when Amy doesn’t act like an idiot, the game becomes a tedious series of trial and error sequences, with little feedback as to what went wrong.

As a downloadable title, I wasn’t expecting Amy to measure up against the triple-A juggernauts of the survival horror genre. However, I was expecting a game that was at least playable and contained some kind of entertainment. Make no mistake: Whether Amy is delivered to you via download, retail SKU, direct brain wave, or retinal implant, it is terrible and should be avoided. 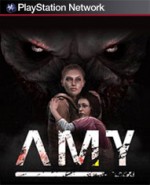 Amy is a cautionary tale of how poor game design can murder fun, and how easily the truly desperate can be separated from $10.

3
i
Game Informer's Review System
Concept Save humanity by keeping a special little girl alive in an extended survival-horror escort quest
Graphics The infected aren’t the only dead-eyed residents of Silver City; Amy is one creepy little kid
Sound Fans of Geiger counters and hissing steam valves are in for a real treat
Playability Awful combat, checkpoints, and AI keep Amy from attaining mediocrity
Entertainment You have better things to do with your life (and $10) than play this broken mess
Replay Low