If you think this game “looks like Rock Band,” then you probably don’t recall Harmonix’s pre-Guitar Hero efforts that helped give rise to the music game phenomenon. Through two games called Frequency and Amplitude, the company made a case for endlessly streaming note highways and beat-matching. Thanks to a nail-biting crowdfunding campaign in 2014, the developer has rebooted the latter game, bringing the original style back for both nostalgic fans and newcomers. But is the magic still there?

From a gameplay perspective, the answer is a resounding yes. Amplitude challenges players to hit several musical bars of a single track, like vocals, drums, or synth, before rapidly tapping over into another track to continue a streak of unbroken notes. Unlike most modern music games, the process is additive (as you layer in new aspects of the mix) rather than subtractive (losing a track through failure) so you have a sense that you’re creating your own personal mix. Switching between instruments lends a frantic, scrambling insistence to the tunes, even as you make rapid-fire decisions about which track can keep your streak alive. As you climb through the difficulty settings, your fingers begin to move faster than your conscious mind, to the point that you’re often surprised that you nailed a particular passage. When paired with the psychedelic background imagery and thumping electric beats, you can easily lose yourself in the flow.

That’s why I found myself disappointed in some of the music, which has the potential to pull you out of that flow. The original Amplitude excelled at mixing up sound and genre styles, but this entry has less variety. That’s particularly true of the mostly Harmonix-authored songs in the concept-album campaign, which loosely tells the story about efforts to awaken a comatose woman. The campaign songs do little to distinguish themselves one from the other, and lean heavily on heavy drum and bass parts that push the boundaries of eclectic. These songs aren’t bad, but they lack the potent catchiness that invites endless replayability – a hallmark of the original Amplitude. Nonetheless, a few entries in the separate Quickplay catalog nail the audio aesthetic and pop with infectious energy, like the driving melodies of Freezepop’s “Phantoms,” Ingrid Lukas’ sexy smooth “Muze,” and even the remixed version of an old Amplitude favorite, Symbion Project’s “Synthesized.”

Most of the 30 songs unlock through persistent play. Sadly, a few of the best songs are trapped behind an archaic approach to progression. You’re required to get high scores on campaign songs, but you can’t replay those songs individually – you must make your way through the entire 15-song campaign again if you didn’t nail top marks the first time around. For most players, that means playing on a lower difficulty than would be fun just to ensure you get enough points to acquire a new song. It’s a small but befuddling design choice that slows forward momentum.

Amplitude is engaging in both solo and multiplayer, since the game adjusts its formula to suit. Single-player is all about precision and focus, demanding a careful attention to power-up usage and streak maintenance. Harmonix has also included the unlockable FreQ Mode for solo players, in which players can alter the display into the circular format seen in the original Frequency. Multiplayer lacks online play, but its local options are robust. Four-player free-for-all quickplay encourages competition, using power-ups to bounce your opponents off their tracks or screw with their visuals. Cooperative and team-based play offer further ways to enjoy with friends, and it’s enormously fun to feel like you’re crafting a song together as a group.

It’s hard to overstate my enthusiasm for the original Amplitude. While I have reservations about some of the music selections and progression, that doesn’t stop me from enjoying this revival. Amplitude is a taste of the past, but it’s far from outdated.

This review was originally posted on December 21st at 11am. 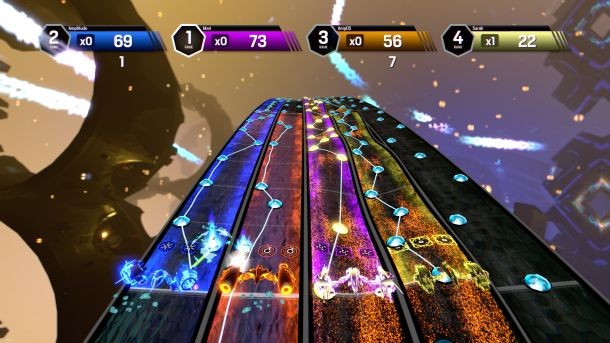 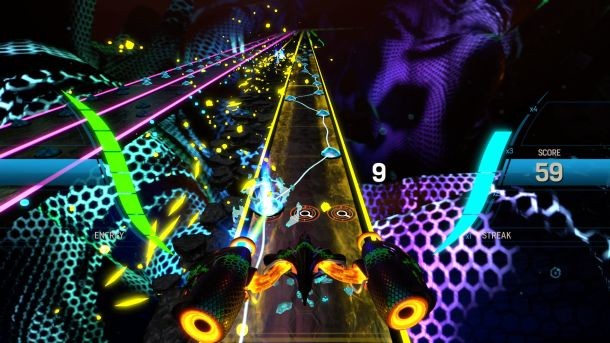 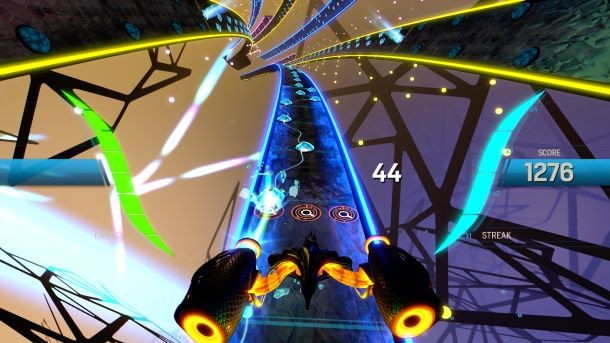 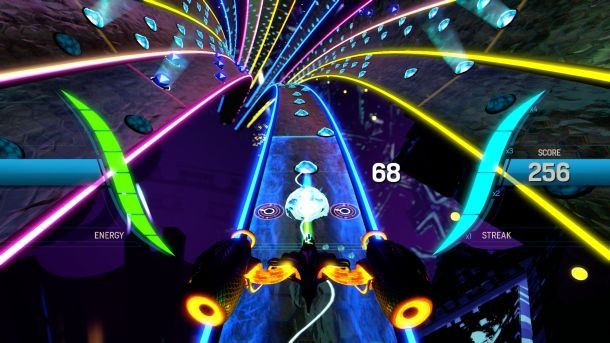 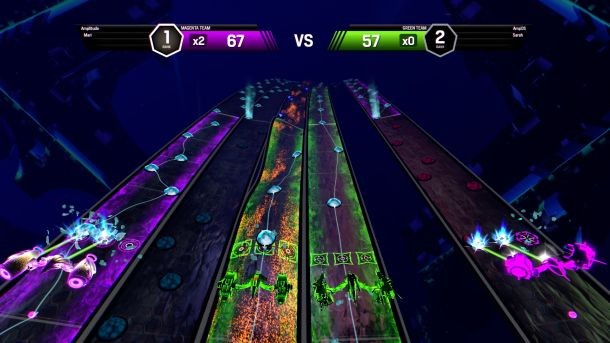 7.75
About Game Informer's review system
Concept
Return to one of the progenitors of the note-highway music games, and zone out to its psychedelic electronica vibe
Graphics
Sharp, bright graphics are inviting, but offer little variety. The shifting backdrops can cause eye strain
Sound
A few catchy tunes recall the original Amplitude’s strange variety, but many of the songs seem to value rhythmic complexity over musical enjoyment
Playability
Engrossing rhythmic gameplay is easy to grasp. Mastering the note patterns to climb into the expert tier takes a long and enjoyable time
Entertainment
A thrilling variation on the formula that harkens back to genre roots, even if the song catalog lacks the catchy replayability required
Replay
Moderate 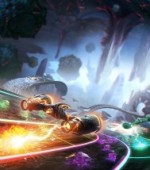