Amnesia: A Machine For Pigs Review Two years ago, Frictional Games delivered a first-person horror game called Amnesia: The Dark Descent. The moody corridor crawler tasked players with lighting the way via a lantern and scattered lamps while evading terrible creatures lurking in the shadows. The Dark Descent ignored combat altogether, instead asking players to run and hide when discovered by a monster. The tense and unforgettable game has given rise to a new wave of combat free, first-person horror games. The Chinese Room (Dear Esther) is up to bat for this sequel to the trend-setting original. The Dark Descent’s flight over fight formula was effective, but A Machine for Pigs doesn’t throw in enough threats to keep players on the edge of their seat throughout.

A Machine for Pigs’ story is told as much through the environment as the scattered files and voiceover work. Set during the industrial revolution, players plod through the depths of a terrible factory that exploits humanity in disturbing ways. I enjoyed exploring the dim hallways of a mansion all the way down to the rattling, steaming bowels of the underground factory. Bold players are destined to discover the horrendous business practices afoot in this processing plant. I saw the main twist coming a mile away, but The Chinese Room unravels the story with its unique flair. Opaque, stylishly written journal entries add deeper meaning to the blood-splattered hallways and creaking processing lines. A disembodied voice frequently speaks to the amnesiac protagonist, peppering clues to his sordid past. I like the story A Machine for Pigs tells, but it feels like The Chinese Room is more concerned with controlling the narrative than letting players get lost in the dark.

Horror is at its best when the audience’s minds fill in the gaps between scares. The original game was conservative with dispersing its monsters, but A Machine for Pigs feels too much so. The Chinese Room shows you plenty of monsters from behind the safety of artificial barriers, but legitimately dangerous encounters are scant. Amnesia: The Dark Descent shined brightest when throwing in an enemy that prompted players to flee into the shadows and hide behind a pile of boxes. Those moments are woefully rare in A Machine for Pigs. A few open sections require players to evade stalking ghouls, but most of the encounters feel too straightforward. For example, one enemy gives chase when walking down a linear path through city streets, which obviously provokes players to keep running forward. I felt like the scares were prodding me down the scripted path of the story rather than leaving the survival strategy up to me. The predictable monster design is also a step back from the gruesome abominations of The Dark Descent. It’s hard to remain frightened while exploring the factory when you feel like the game is pulling punches.

Using your lantern to navigate the darkness is necessary, and it escalates the tension. The original game required players to collect oil for the lantern and tinder boxes to light lamps along the way. These resources have been axed for a lantern with an infinite supply of oil. This more-reliable lantern enables players to explore the environments freely, but reduces motivation for exploring every nook and cranny. Lighting a breadcrumb trail of lamps was a key layer of tension in the original that is sorely missed in this sequel. A Machine For Pigs attempts to compensate by causing the lantern to flicker unreliably when enemies are near, but this only further dampens the scares. I began using the light source like the radio from Silent Hill, removing some surprise from enemy ambushes.

It feels like a trek through an understaffed haunted house crafted by artists with something to say about the ugly past of industrial progress. The winding, linear path is interrupted with simple crank-turning puzzles with the goal of repairing or sabotaging intimidating machinery. But these tasks just feel like distractions without the omnipresent threat of running out of light. One memorable moment interrupts a backtracking fetch quest with a sudden enemy appearance, but like many of the other frights this is just a false start.

The Chinese Room proves once again that it has wonderful, affecting stories to tell and can create environments that ooze atmosphere. The same could be said of some of the horror film genre’s best directors. However, A Machine for Pigs guides players along the bloody processing line too strictly, removing the impact of interactivity. I had trouble giving into the scares when I knew each one was carefully prepared and mostly benign dressing or loud noises. It will still rattle of the faint of heart, but survivors of the original will feel like they’ve endured worse.

7.75
About Game Informer's review system
Concept
Follow up Amnesia: The Dark Descent’s castle-crawling horror with a macabre look into the industrial revolution’s underbelly
Graphics
Some rooms are impossibly dark without your lantern, a necessary tool that shows off Amnesia’s impressive lighting system
Sound
The groaning sounds of machinery and unsettling monster snarls keep you on edge
Playability
Controller support makes the keyboard and mouse optional, and provides a much more comfortable experience
Entertainment
More linear and story-driven than the original, but a disturbing, cerebral trek into some of the best scares the genre has to offer.
Replay
Moderately High 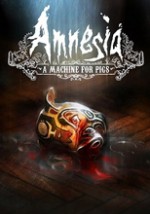 Amnesia: A Machine For Pigs