During the course of a single mission, Michael Thorton is betrayed by his country, framed by his superiors, and cut off from his support. This pivotal moment in the story is clearly where things go wrong for the super-spy hero, but I wish it were as easy to pinpoint exactly where Alpha Protocol falls apart as a gaming experience. The espionage-themed hybrid of third-person action and RPG leveling is a baffling cocktail of outdated design and technical problems, with only a handful of bright spots illuminating how good the game could have been.

The best spy stories have magnetic, capable protagonists you love to cheer for – just look at genre icons like James Bond and Jason Bourne. Michael Thorton is an unlikable idiot by contrast. Maybe it’s the fact that his personality is a collection of rote secret agent clichés, or the way tense situations elicit no reaction from him beyond dull resignation. Whatever the reason, I never warmed up to Thorton or thought he was cool, and I got more entertainment watching his failure than I did his success. Super spies should inspire excitement in an audience, not schadenfreude.

You could argue that Thorton’s lack of charisma was partly my fault, since Alpha Protocol’s dialogue system lets you steer conversations based on how you view the character. However, I refuse to accept any blame for his wooden performance. You aren’t given nearly enough opportunities to interact in a non-combat situation, and when you are, your replies are usually simply labeled “suave,” “aggressive,” and “professional,” so you never encounter responses that tempt you to deviate from a certain attitude. The conversations may seem similar to Mass Effect’s on first glance, but where that title keeps players engaged with constant choices, Alpha Protocol doesn’t put the system (and, by association, the characters) at the forefront.

The wedge between the player and the events makes it impossible to care about the generic “shady defense contractor out for profit” plot, and the gameplay does nothing to salvage your interest. Whether you choose to be a stealthy spy or a guns-blazing soldier, the mechanics are archaic and unaccommodating. You can’t vault over cover, you can’t block melee strikes (bad guys can, though!), and the enemy AI makes the dumbest James Bond minions look like rocket scientists. The bosses, on the other hand, are on the opposite end of the chump spectrum. Don’t misunderstand me – they aren’t smart. They’re aggravating and poorly designed. One left me speechless, since I couldn’t think of profanity foul enough to express my frustration. Throw in a lot of loading (sometimes mid-firefight), pervasive texture-popping, and a preponderance of dumb minigames, and you have a lack of polish that puts a nearly impenetrable wall up in front of your enjoyment.

Alpha Protocol’s jumbled mess of mechanics is tragic, because some aspects are genuinely well done. Thorton’s progression is handled excellently, allowing plenty of flexibility to tailor his skills to your style. The abilities you unlock as you level – like invisibility and auto-targeting – are satisfying rewards for your investment. I was also immensely impressed by how the narrative naturally conforms around your choices. Events flow seamlessly regardless of when you complete a mission, your chosen allies, and who lives and dies. Characters often reference your previous actions and allegiances, which is pretty remarkable considering all of the factors on the table. This adaptability would add to the replay value – if the other facets of the experience were good enough to warrant completing the game once.

With a history including games like Knights of the Old Republic II and Neverwinter Nights 2, the team at Obsidian Entertainment knows role-playing. Alpha Protocol isn’t necessarily a counter-point to that expertise; the RPG systems under the hood are solid. I just wish that I could experience them in the context of a compelling espionage adventure, not a last-gen third-person shooter.

6.5
About Game Informer's review system
Concept
Here’s a riddle. What do you call the guy who graduated last in his class at spy school? Michael Thorton!
Graphics
When all of the textures are present on the characters and terrain, the game looks decent. This doesn’t happen often
Sound
Some decent voice acting, but the worst performance is the most important, since it’s your main character
Playability
Technical issues abound, which often makes the controls feel stilted and awkward
Entertainment
Cool weapon customization, leveling, and skill selection mean that you’ll have most of your fun in the menus
Replay
Moderately Low 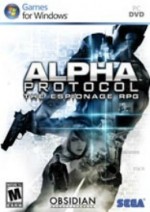